Soccer is one of the most popular sports around the world. Performance in the soccer is not only related to technical abilities and tactical knowledge, but also depends on physical characteristics including exercise capacity, muscle strength and endurance, balance, and coordination as well as mental status including motivation (1-3). Since it is a highly competitive sport, exercise capacity is one of the most important determinants of the performance for soccer players (3). Although aerobic energy system is dominantly utilized during a soccer game, many quick and explosive actions such as high jumps, short sprints, tackles, and dual play require anaerobic energy (4,5). During a soccer game, players cover approximately 10-13 km, and 10-15% of this distance is running in remarkably high speeds around 19 km/h (6-9). These high intensity movements were advocated important for determining the outcome of the game (10).

Muscle strength and endurance are other important aspects for the performance. One can assume that lower extremity muscles are essential for the success, however, many authors emphasize the importance of the trunk region as well (11,12). Core stability refers to the muscle control of the lumbo-pelvic region to maintain functional stability and provide optimum energy transfer from the trunk to the distal segments (12). Therefore, core region mainly referred as the powerhouse of the body.

The present cross-sectional study was carried out in Altınordu Football Club. The ethics approval was obtained from the local ethics committee of İzmir Katip Çelebi University with decision number 86 on 05.11.2020. Prior to the study, all participants were checked by an internist, and then, they signed written informed consents. The study was performed in compliance with Declaration of Helsinki.

The number of participants were determined as 31 individuals by using G-Power program by using 95% confidence interval and 95% power according to values from the study of Nesser et. al (the relationship between trunk stabilization scores and vertical jump test scores was r: 0.591) (19). The number of the participants was increased by 10% and thirty-five Male Elite Academy League soccer players who were competing in Elite U17 and Elite U19 leagues were included in the study (Table 1). Participants were excluded if they (a) had a musculoskeletal or neurological problem affecting the lower extremity, (b) had a history of a trauma requiring surgery and/or physiotherapy within the last month or (c) refused to participate in the study.

Table 1. Demographic characteristics of the athletes
×

Each participant was evaluated for a total of four times with 24-hour intervals. All the assessments were performed at the same time of the day and under same conditions for each participant. For example, if a participant was assessed at 9:00 am, then he was assessed for the second time at 9:00 am on the following day. The running exercises (part 1 and part 3) of the FIFA 11+ warm-up program was employed as a standard warm-up before the assessments (20). On the first day static and dynamic core stability; on the second (vertical jump test) and on the third days (anaerobic sprint test) anaerobic performance tests; and on the fourth day anaerobic exercise capacity were assessed.

Static Core Stability: Side bridge test was used to assess the static core stability. Each participant was asked to lie on his dominant side with the foot of the upper leg placed on the foot of lower legs and non-dominant arm crossed across the chest (Figure 1). Stopwatch was started when the participant lifted his body over his forearm and outer lateral surface of his foot, then he was asked to maintain this position as long as he can. Test was finished when the participant could no longer hold the position, and the elapsed time was recorded in seconds. Test was repeated for three times and best score was used for the analysis (21). Five minutes rest were provided between attempts. 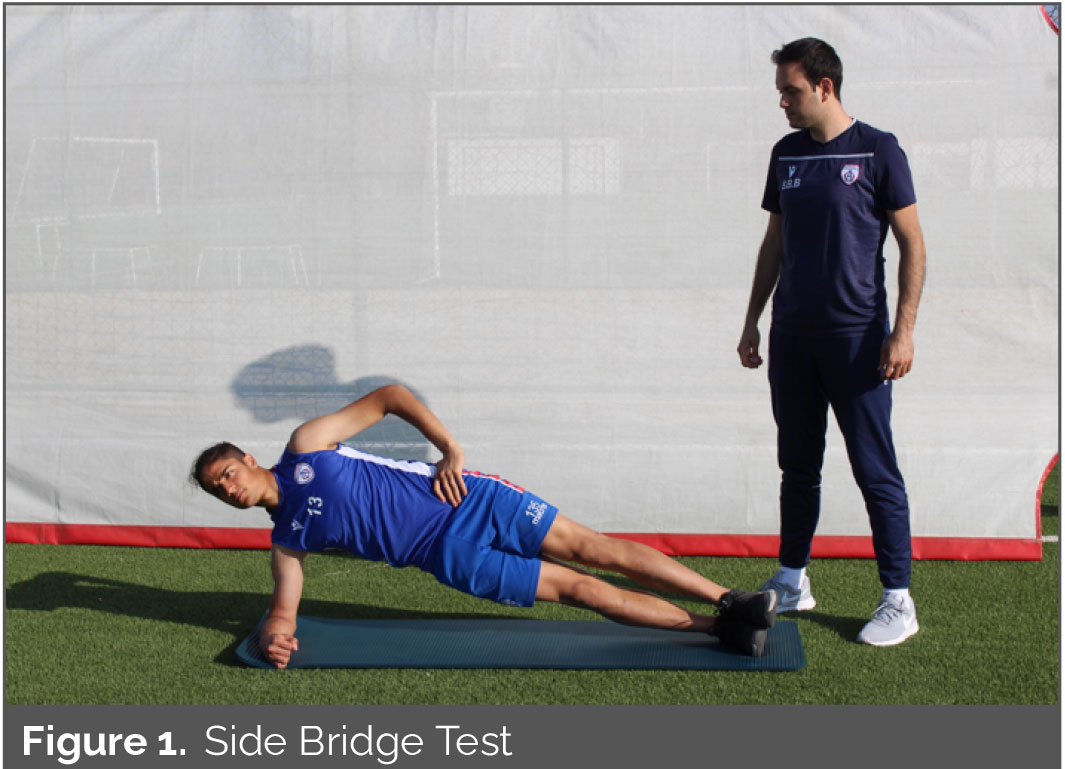 Dynamic Core Stability: Y balance test which is a simple and widely used test was applied to evaluate the dynamic core stability (22). The test was performed on a “Y” shaped platform where the participant was asked to stand on one leg and push the mobile part of the platform by reaching out as far as he could anteriorly, posteromedially and posterolaterally (Figure 2). Participants performed six trials prior to actual testing for familiarizing. The distance reached were recorded as centimetres. The tests were repeated for three times and the best scores were used for the analysis. Each distance was normalized to lower extremity length. A composite score was calculated using the following formula for the dominant side (23):

Vertical Jump Test: The SmartJump Mat (SmartJump; FusionSport, Coopers Plains, Queensland, Australia) which is reported to be one of the most accurate methods for measuring vertical jump height, was used for Vertical Jump Test. The test was explained verbally to the participants prior to assessment. The participant was asked to place his hands on his waist and to keep this position during the test. Then, he was asked to perform a deep squat, and jump as high as he could (Figure 3). The test was repeated three times and the highest jump was used to calculate the peak power (24). 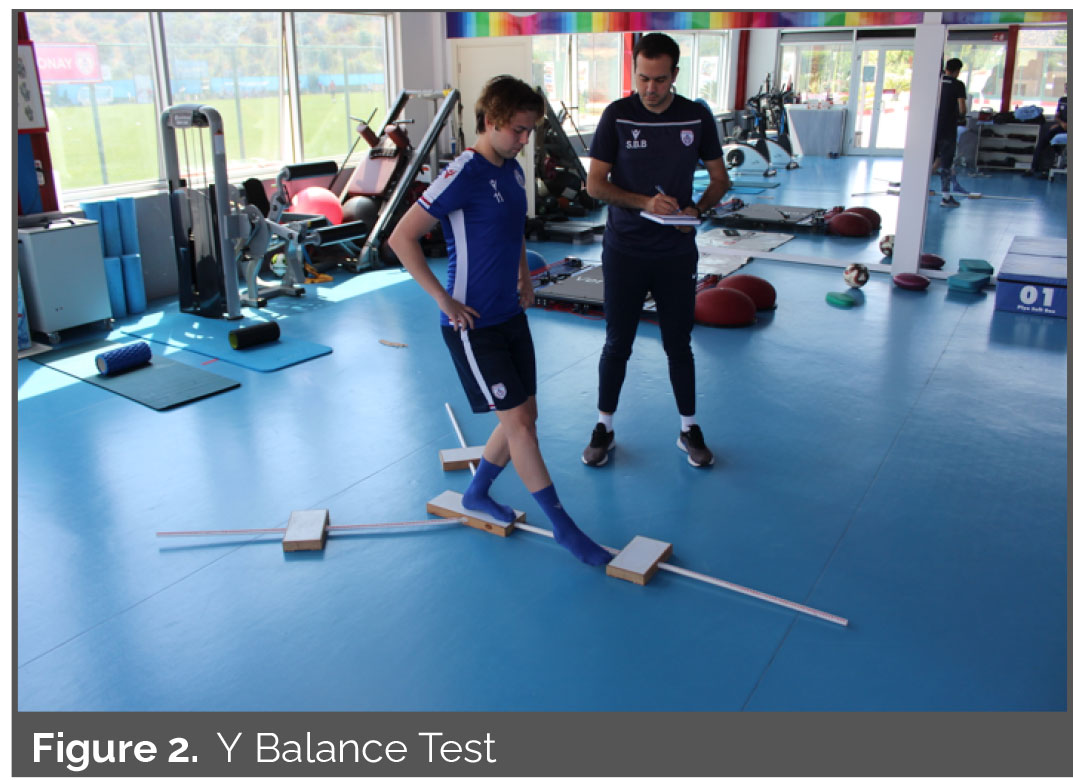 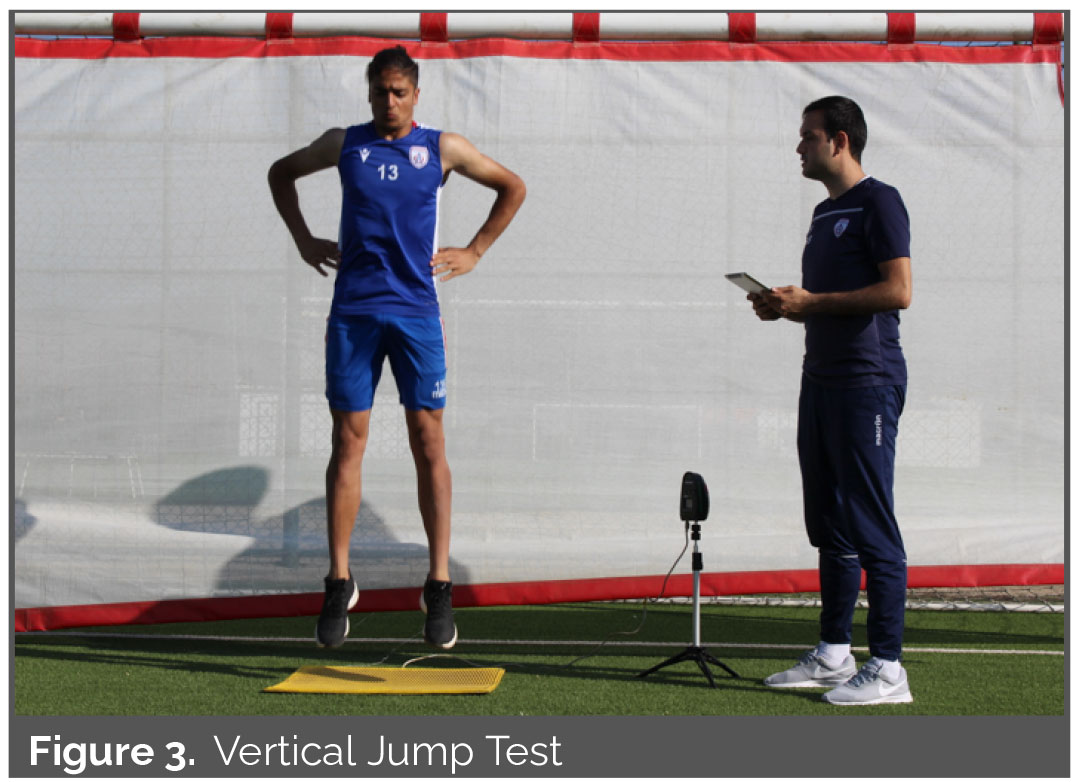 Running-Based Anaerobic Sprint Test (RAST): The test includes six sprint runs over 35 meters with 10 seconds of passive rest intervals. For each sprint measurement, a photocell system was placed at a height of 75 cm both on the start line and on the finish line. The photocell system uses infrared rays to precisely measure the time between the start and finish lines (Fusion Smartspeed lightgates, Hab International, Warwickshire, England) (25, Figure 4). The participant was informed that following each 35-meter sprint, he should return to the start line. During the test, the participant was verbally motivated. Each participant completed six sprints and the total time was recorded. The system calculated the anaerobic power (25). 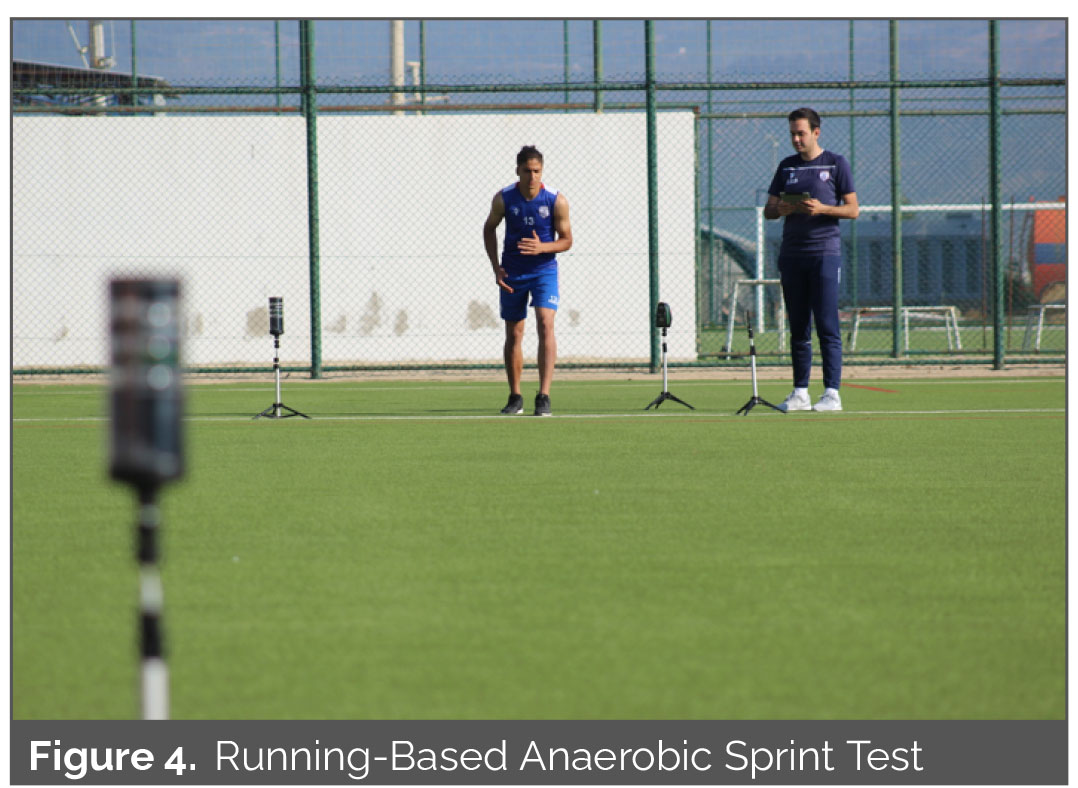 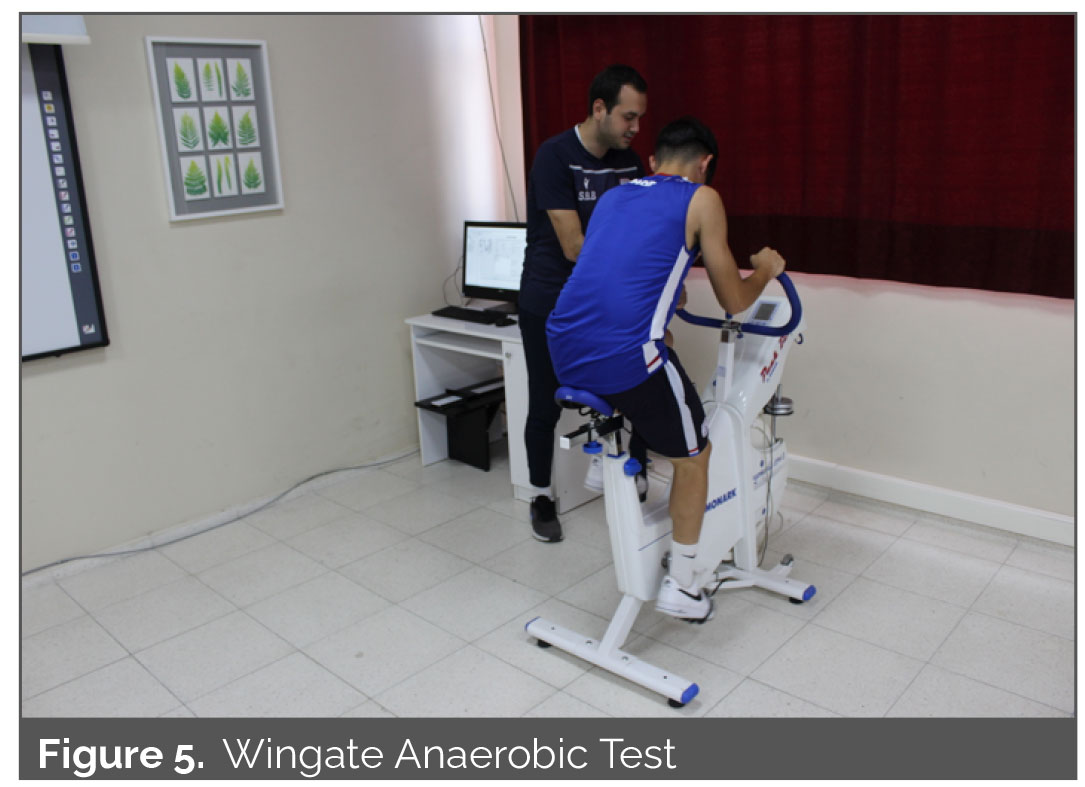 Wingate Anaerobic Test (WAnT): Wingate Anaerobic Test was employed to determine the anaerobic exercise capacity (Figure 5). The test was explained to participant prior to actual testing. The test was carried out on an Ergomedic 894-E cycle ergometer (Monark, Switzerland). The seat height of the bicycle was adjusted to the participant. The external load was calculated as the 7.5% of the participant's body weight (26). The participant was asked to pedal for 150 seconds at an increasing rate starting from 80 rpm for the test-specific warm-up. Following warm-up, the athletes were asked to accelerate and press the start button which lowers the load pan when they reach maximum speed. When the external load was applied, 30-second actual testing period started. Throughout the test, the participant was verbally motivated to maintain his speed. Peak power/kg (peak power adjusted to bodyweight), and average power/kg (average power adjusted to bodyweight) values were calculated by Monark All-in-One Software.

Data analysis was carried out by using Statistical Package for the Social Sciences (SPSS Inc. Version 15; IBM, Raleigh, NC, USA) for Windows. Shapiro-Wilk test was used to check the distribution characteristic of the data. Continuous data was expressed as mean and standard deviation for normally distributed variables, and as median and interquartile range 25/75 (IQR 25/75) for not normally distributed variables. Pearson Correlation Coefficient (r) and Spearman Rank Correlation coefficient (rho) was used to analyze the relationships between variables, for parametric and non-parametric conditions, respectively. Correlations were interpreted as follows: >0.90 very high, 0.90-0.70 high, 0.70-0.50 moderate, 0.50-0.30 low, ≤0.3 negligible (27). A p value of <0.05 was accepted as statistically significant.

The study was completed with 35 participants with a median (IQR 25/75) age of 17.0 (17.0/18.0) years. Most of the participants (80%) were using their right legs dominantly. Eleven of the participants were forwards (31.4%), ten were midfielders (28.6%), ten were defenders (28.6%), and four were goalkeepers (11.4%). Median sport age was 7.1 (min/max: 5/12.30) years, and median injury count was 1 (min/max: 0/4) for all-time sport career. Weekly training time was approximately 10 hours. Demographic characteristics were summarized at Table 1. Anaerobic exercise capacity, anaerobic exercise capacity related performance tests, static core stability and dynamic core stability values were shown at Table 2.

Our first hypothesis was rejected as no correlations were detected between side bridge test and any of the anaerobic exercise capacity measures (p> 0.05, Table 3). Second hypothesis was confirmed as there were low-level relationships between dynamic core stability and average anaerobic exercise capacity, and between dynamic stability and RAST peak scores (p< 0.05, Table 3).

Previous studies determined that the dynamic core stability showed some relation to various performance parameters in different sports. Cengizhan et al. reported that dynamic core stability was a predictor of core muscle endurance and agility in elite basketball players (28). Behm et al. found dynamic stability was associated with agility and performance in hockey skating players (29). Additionally, Guler et al. showed that balance training improved activities that were anaerobic in nature such as jumping and sudden direction changes (30). Most of the anaerobic activities performed during a soccer game involve swift direction changes and high speed, thus, maintaining the centre of gravity in limits of stability while executing these activities may be important. Our results along with literature support this assumption. It seems that soccer players who present better dynamic stability may better perform anaerobic activities. However, there must be other factors that are yet to be discovered related to these parameters as the relationships were found in a low level in the present study.

On the other hand, we did not observe any associations between static core stability and anaerobic exercise capacity related measures in our study. We have employed the side bridge test which is advocated as a good indicator of static core stability (31). However, it might not capture the dynamic stability which is commonly utilized during a soccer game. The anaerobic actions in the soccer involve dynamic activities which require explosive power. Previous studies also support our results (17,32). Ozmen observed no significant correlation between squat jump height and side bridge test times in soccer players (32). Nesser et al. report no significant relationships between shuttle run test, 40 meters sprint test and static core stability tests in Division I female soccer players (17). On the contrary, same authors found poor relationships (between r= 0.374 and r= 0.435) between side bridge test and 20-m sprint run, 40-m sprint run, and vertical jump in Division I male soccer players (19). Besides Okada et al. detected a poor relationship (r= -0.383 for the right side, and r= -0.448 for the left side) between agility T-test and side bridge test (18). Agility T-test includes direction changes, despite of running in a line as used in the present study. This might have led to the different results in our study.

Our results only reflect the status of young elite male soccer players, and they might be different for female soccer players or more experienced players. Recruiting participants from only one soccer club is another limitation of our study. Besides, our results were obtained from a cross-sectional study, and yet to be confirmed by future prospective longitudinal studies. Investigating the relationships between core stability status and soccer-related anaerobic movements such as shooting a ball and tackling may provide a deeper insight to the topic.

The approval for this study was obtained from Clinical Research Ethics Board of Izmir Katip Celebi University (Approval number: 86, Date: 05.11.2020).