Experimental Approach
A self-controlled randomized prospective study design was used to evaluate the acute effects of static and dynamic stretching exercise on dynamic balance performance. Testing consisted of three protocols. The sequence of the three different exercise protocols including static stretching, dynamic stretching, and warm-up alone as a control, was randomly aasigned to avoid potential biasing effects. Before and after each exercise protocol, dynamic balance was tested by using an isokinetic balance system.
Subjects
A total of 73 (34 male, 39 female) recreational athletes volunteered to take part in this study. Subjects were players of badminton (n=22: 13 male, nine female), basketball (n=23: nine male, 14 female), and tennis (n=28: 12 male, 16 female), with similar characteristics. Detailed training levels and medical histories of all the subjects were established, and physical exams were completed. Inclusion criteria were: to be 18-30 years of age, to train once or twice a week with a trainer for at least two months. Exclusion criteria were: to have a vestibular, visual, neurological, or musculo-skeletal problem that can affect balance; to train more than twice a week, musculoskeletal injury in the last six months, using medication that can impair balance.
Two subjects did not complete all protocols, three subjects had leg length discrepancy, and one subject had a muscle injury while playing basketball during the study. After exclusion of six subjects (a male, five females) a total of 67 (33 males, 34 females) subjects were included in the study. Characteristics of subjects are given in Table 1.

The study design was reviewed for ethics and approved by the Ege University Human Investigations Ethic Committee. Participants were informed about potential risks and benefits of participitation in the study. No injuries occurred during the testing sessions.
Procedures
Subjects were tested on three different days, 48-72 hours apart. They were asked not to use alcohol and to avoid excessive physical activity for 24 h before testing sessions. Each testing day started with double limb dynamic balance measurement on an isokinetic balance system, which is followed by warm-up, intervention and double limb dynamic balance measurement, respectively. Subjects warmed up for 5 min on a bicycle ergometer at 50-60 rpm and 70 W. Intervention was static stretching protocole, dynamic stretching protocole or rest (sitting on a chair). All interventions lasted 12 min and 45 s.
Stretching protocols
Stretching exercises were applied bilaterally to four different lower extremity muscle groups: knee extensors (quadriceps), knee flexors (hamstring), ankle plantar flexors (gastrocnemius-soleus) and ankle dorsiflexors (tibialis anterior).
Static Stretching Protocol: All static stretches were active and were held at the point of mild discomfort without pain (Figure 1). Each static stretch was repeated three times for 15 s, with a 15 s rest between each stretch repetition and was repeated on the opposite limb. For the plantar flexors, the 15 s stretching was split into two, half for gastrocnemius and half for soleus, beginning with the gastrocnemius. 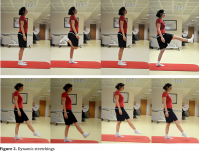 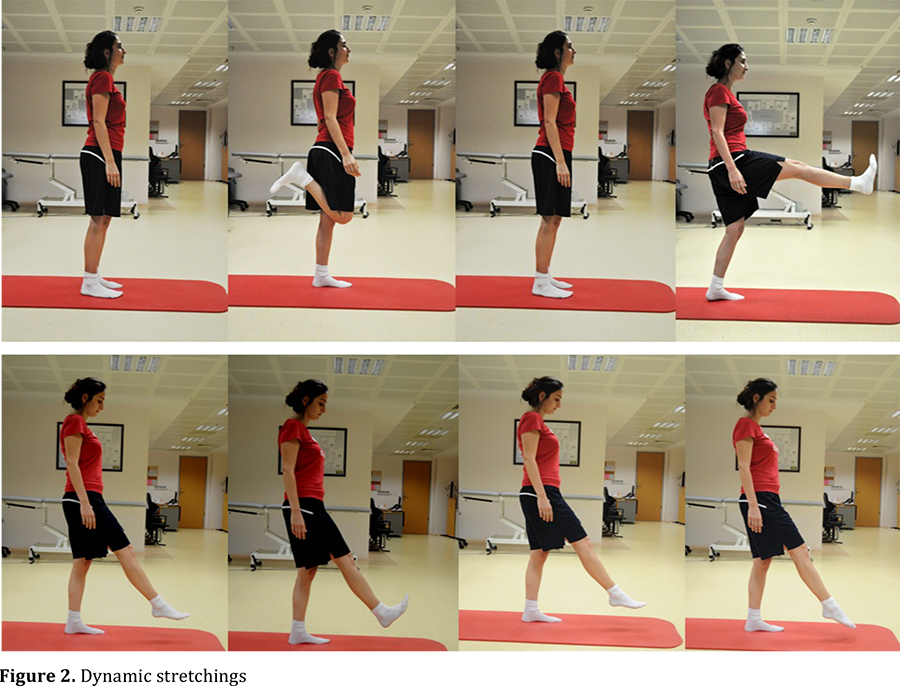 Quadriceps and hamstring stretching exercises were performed at standing position as described by Şekir et al. (15).
Ankle plantar flexor muscles: In standing position, the subject leans into a solid surface. Foot of the side to be stretched is placed posterior to the other foot while feet are in neutral position, and the subject facing straight to solid surface. The subject leans forward till feeling a mild discomfort in the gastrocnemius muscle while the stretch side knee is straight, and heel is on the ground. After keeping this position for 7.5 s, the subject moved stretch side foot forward while flexing the same side knee till feeling discomfort in the soleus muscle, and kept this position for another 7.5 s.
Ankle dorsiflexor muscles: In sitting position, subjects lifted the extremity of the side to be stretched and placed foot of the lifted extremity on the opposite side’s knee. While the foot is in neutral position, the subject pulled the anterior part of the foot till feeling a discomfort in tibialis anterior muscle without pain. Pull maneuver was performed carefully to plantar flex the ankle without eversion and inversion (Figure 1).
Dynamic Stretching Protocol: Subjects voluntarily contracted the antagonist of the target muscle in standing upright position and flexed or extended the joints involved once every 2 s so that the target muscle is stretched (Figure 2). Dynamic stretching in each muscle group was repeated for two sets 15 times (first five times slowly and then the next 10 times as quickly and powerfully as possible, without bouncing). Every dynamic stretching set resumed 30 s, applying 15 s rest between each stretch repetition.
The order of target muscle and resting periods was the same as those in static stretching, and overall stretching time was the same (11’45”) for both dynamic and static stretching protocols.
Balance protocol
An isokinetic balance system device (PK-252, Tecnobody, Italy) was used, and the “Equilibrium Management Test” program which is reported to be reliable (24) was selected for dynamic balance measurements (Figure 3). This program gives the Total Stability Index (TSI), which is the average index, degree of tilt in all directions horizontally from the center of the platform, during the measurement of dynamic balance. According to Testerman and Vander (25), TSI is the most important indicator revealing a person's ability to balance the platform. Low TSI values indicate better balance. 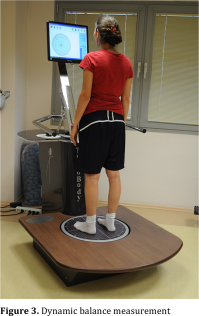 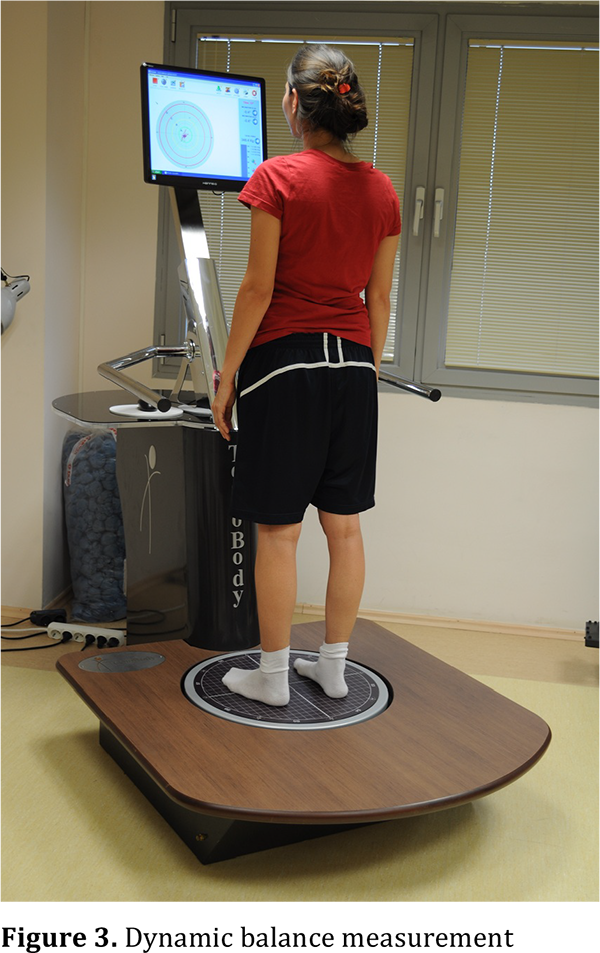 In the "Equilibrium Management Test" program, one of the factors that needs to be set in terms of standardization is the "Force Absorber" system. This system determines the freedom of the platform through four pistons placed beneath the platform. Six different resistance options are available as 1-5-10-20-30-40, from most free to most stable. In a similar study investigating dynamic balance of recreational athletes designed by Costa et al. (12), where the resistance of the piston ranged from one to eight, and the third resistor selected. As this study is carried out on recreational athletes, the appropriate piston resistance was selected as 10.
Placing the feet on the center of the platform is very important for balance measurement, as the reference points that the feet are placed on can alter balance score (26). For this reason, prior to the first dynamic balance measurement, subjects were asked to identify the spot where their feet were at equal distances from the center, and parallel to each other; and to find the position that they felt comfortable and well-balanced. Thus, the best position of the feet was marked. These positions were marked through reference points on the disc. Individuals’ feet positions were thus at the same reference points during each trial for standardization.
During the test, subjects were asked to try to keep their position as long as possible by standing double-footed and barefoot on a 55 cm platform. Also, they were asked to keep their hands on the side of their legs, with eyes on the monitor. During the dynamic balance test, if subjects lost balance and contacted the device with their arms, they were immediately asked to try to resume the test.
Measurements of dynamic balance were made before and following the protocols applied. Subjects were allowed three practices before each test attempt to minimize learning effects. Each dynamic balance test lasted 30 s.
The subjects were made to rest for one minute after the application of each protocol; thus, the time period between the two dynamic balance measurements, including the warm-up period, lasted a total of 17’45’’ for each exercise protocol.
The same researcher explained all procedures to all subjects and controlled every stage for correct timing and stretching movements.
Statistical analysis
Statistical results were analyzed using the SPSS program (v15.0). Descriptive statistics, including means and standard deviations were provided for the data. The Shapiro-Wilks test was used for normality analysis. Non-parametric tests were used due to non-normal distribution of data. Mann-Whitney U test was used to examine the differences between genders. The Wilcoxon sum rank test was used to examine effects of interventions on dynamic balance. Friedman test was used to compare effects of different interventions. Covariance analysis was used to adjust TSI scores to stature. Statistical significance was accepted at the level of p<0.05.

The research revealed that all the three warm-up, static, and dynamic stretching protocols positively affect dynamic balance performance (p<0.01) (Table 2), with no significant difference between either genders (p>0.05) or protocols (p>0.05) (Table 3). There was a significant difference in pre-intervention TSI scores between genders (p<0.001). By adjusting pre-intervention TSI scores to height, mean TSI of males became 1.70 ± 0.12 and that of females 1.61 ± 0.12 (p=0.67).

Table 2. The acute effects of each exercise protocol on dynamic balance performance
×