Objectives: The purpose of this study is to reveal the qualifications of international articles published from Turkey in the field of Sports Medicine.
Methods: Articles published from Turkey in the field of Sports Medicine were systematically searched. The distribution of articles according to their publication year, the journals in which the articles were published, study designs and scientific evidence levels of the articles were investigated.
Results: A total of 498 articles published between 1966 and 2017 were included to in the study. The articles brought about a significant increase over the last 15 years. Most of the publications were original articles (n=270, 72%) and 59 articles were Level 1 (11.8%) studies.
Conclusions: Publication of articles in international journals is increasing every year. While the quantity of original articles was relatively high, the rate of level 1 and animal studies was found to be lower. It is thought that issues specific to sports medicine and the quality of studies should be emphasized.

There is great interest in sports in our country as it is all over the world, and as a result comprehensive research is carried out on sports and athletes health. Herodicus carried out first medical contributions about sports medicine by the 5th century BCE, and he has been suggested to be the father of sports medicine. The concept of sports medicine in Europe was recognized in the early 20th century and specific studies were initiated in the field of sports science (1).
The first Department of sports medicine in Turkey has been established at the Ege University Medical Faculty in 1973. The next department was established in the Gülhane Medicine Faculty in 1986 (2). It has demonstrated significant development up to date. Together with this development, the rise in academic research is known, but knowledge about the quantity and characteristics of the publications is very limited. The quantity and quality of publications describe the level of academic achievement of a country that contributes to the medical field.
The purpose of this study was to analyze the qualifications of nationally produced articles originating from Turkey in the field of Sports Medicine in the PubMed database and to present their contributions to international literature.

All articles referred to in the PubMed database related to sports medicine from Turkey were searched. The main key words used for the search were ‘sports medicine’ and ‘Turkey’ in the PubMed database and our search yielded 511 results on PubMed. All the articles related with sports medicine were included in the study. Thirteen articles were irrelevant to sports medicine so they were removed, and 498 articles which were published between 1966 and 2017 were included in this research. Articles were downloaded in abstract (text) file format with article title, author names, journal names, publication dates and summary. Data were removed, sorted out and rearranged using the database’s management software. Two independent investigators administered analyses, with divergences resolved by debate or a third investigator. Distribution of the articles by topics, published journals, year of publication and annual rates of increase and decrease were explained with discrete tables and graphs. Research methodologies of articles were organized under five primary titles, namely original article, review, case report-case series, letter to the editor, and technical note. The number of experimental studies and subgroups were also defined. The quality of study designs was classified with the Oxford Centre for Evidence-Based Medicine System (3). The classification of the journals was done according to the publication number, category, scope and impact factors of the year 2014. In the distinction between sports- and other than sports medicine, Scientific Journal Citation Thompson Reports was used (4). Also the number of multicenter- disciplinary studies, collaborative clinical fields and author numbers were identified. Institutions were collected under four groups including private hospitals, university hospitals, public hospitals, and education and research hospitals. General citation analysis of overall articles was made by using the Google Scholar Index. "SPSS for Windows 15.0" program was used in data statistical analysis. 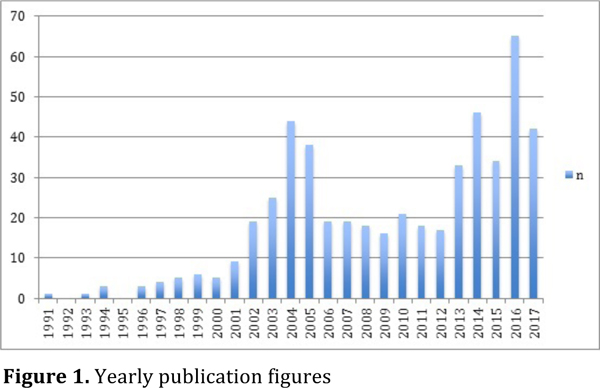 Table 1. Distribution of articles with respect to topics
× 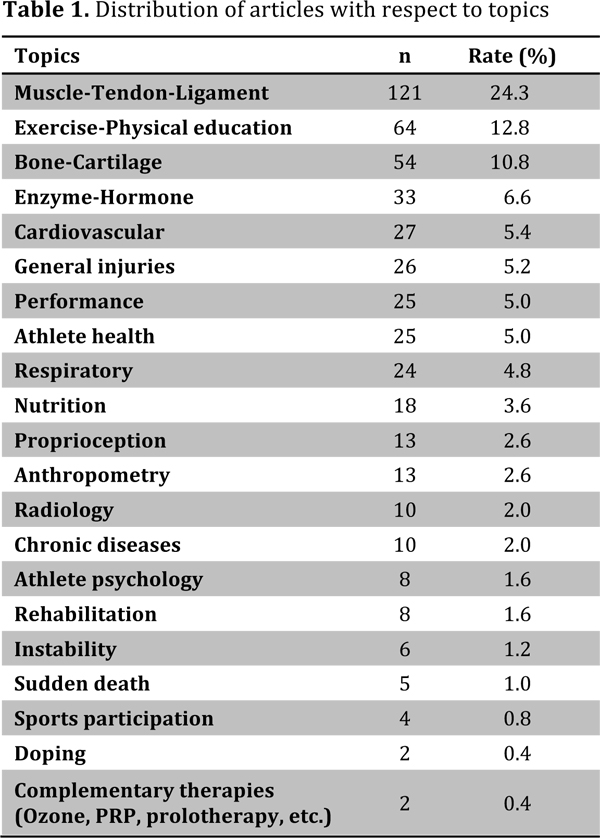 Figure 2. Distribution of articles with respect to body parts
×

Figure 2: Distribution of articles with respect to body parts 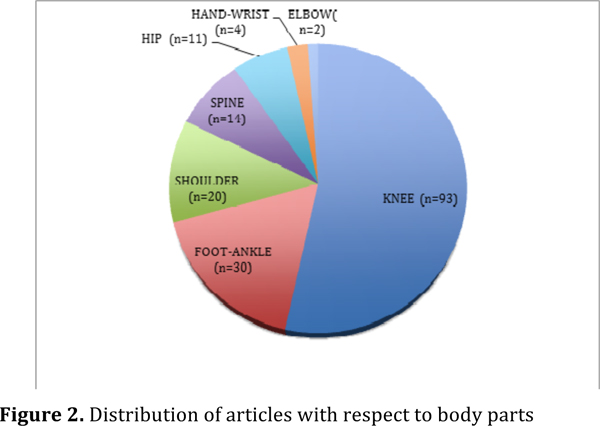 Figure 3. Distribution of the articles with respect to sports fields
×

Figure 3: Distribution of the articles with respect to sports fields 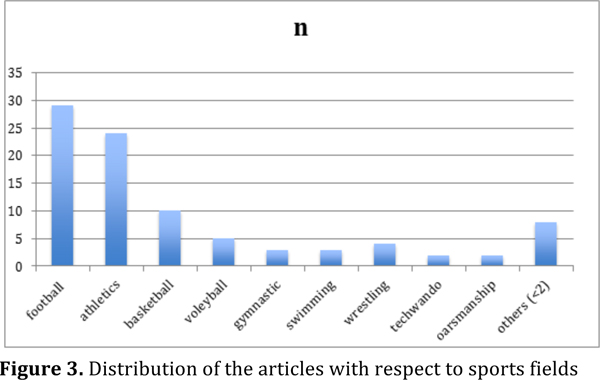 Fifty-eight of the original articles were non-clinical experimental studies (animals: 37, cadavers: 7, biomechanics: 9, in vivo: 5), others were clinical or observational studies. A total of 59 articles were level I (13,6 %), 219 articles were level II and III (50,7%), 154 articles were level IV and V studies (35,6%) according to the Oxford Centre for Evidence-Based Medicine System. Table 2 displays the distribution of articles according to published journals, scope and impact factors. The number of articles published in sports science journals were 242, and the number of articles published in journals except sport sciences/ sports medicine were 252. Knee Surgery Sports Traumatology Arthroscopy with 105 articles (21.0%) and Journal of Sports Science & Medicine with 30 articles (6.0%) were the most preferred journals in the sports medicine group. Acta Orthopaedica et Traumatologica Turcica with 32 articles (6.4%) was the most preferred journal that was not in the sports medicine group. A total of 182 studies were multicenter based (36.5%) and the number of the multidisciplinary studies was 372 (74.7%). Most favorite collaborating clinics were orthopedics (n=182), physical medicine and rehabilitation (n=50), and physiology (n=42). About 444 articles were conducted in university hospitals (89,1%), followed by training and research hospitals with 33 articles (6.6%), private hospitals with 10 articles (2.0%) and state hospitals with 11 articles (2.2%). The number of authors ranged from 1 to 34 (A mean of 5.3).

Table 2. Distribution of articles according to specific journals
× 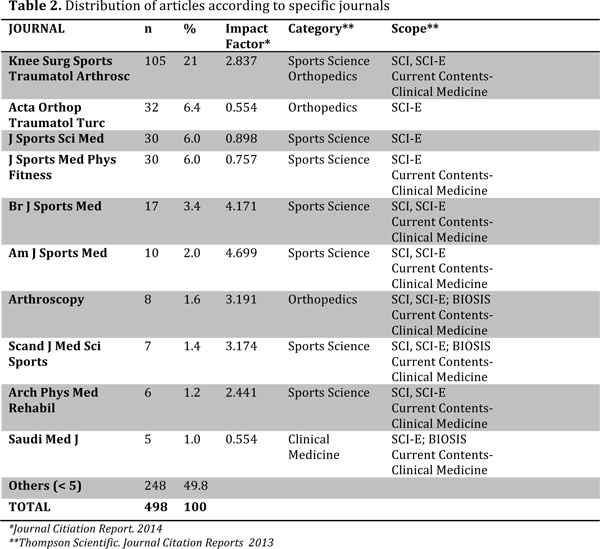 Total citations were 1642 in our study. The most cited article was ‘The fate of the iliopsoas muscle in long-term follow-up after open reduction with a medial approach in developmental dysplasia of the hip. Part 2: isokinetic muscle strength evaluation’ with a number of 212. The second most cited article was ‘Energy-drink consumption in college students and associated factors’ with a number of 174.

Figure 4. Quality of study designs according to the Oxford Centre for Evidence-Based Medicine System
×

Figure 4: Quality of study designs according to the Oxford Centre for Evidence-Based Medicine System 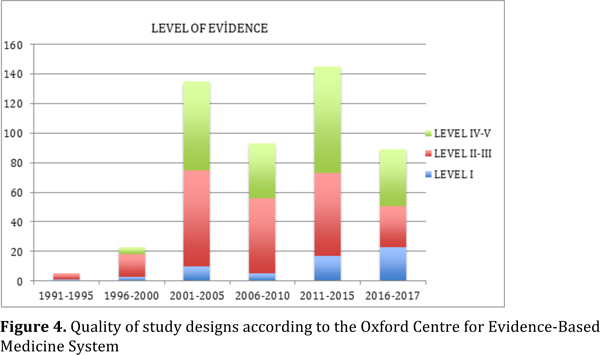 Worldwide sports medicine articles have shown a significant increase over the last 15 years (5). Academic publications in our country have increased in consistence with this development in international literature. As indicated in Figure 1, published articles have demonstrated a rapid increase up to 2004 in our country as well as in the world. However, the pattern is different following 2004; and a rapid decrease and slight undulating up to 2012 than a rapid increase thereafter might have resulted from healthcare policies or research opportunities in various years.
The widespread issues of worldwide sport sciences research are physical education, athlete performance and sports participation (6). Distribution of the topics was different from this; and most frequent issues were muscle-tendon-ligament 24.3%), followed by exercise- physical education (12.8%) and bone-cartilage (10.8%). This indicates that interests of sports medicine are not exactly directed to concerns in our country. This reality was also mentioned in Yaman’s review (6), subjected to sports medicine training in Turkey.
There were no data about the frequency of article topics in the literature, but that is considered to be correlated with the frequency of sports injuries. In Yıldız’s review (7) lower extremity sports injuries were given to be mostly occurring in the knee (33%), following by foot-ankle (21%) and hip-tight (6%). In our study, knee was the most popular issue in articles with a number of 93 (53.4%), followed by foot-ankle with 30 articles (17.2%) and shoulder with 20 articles (11.5%). Distribution of the articles seemed to be correlated with the distribution of sports injuries in our country.
The most referred to sports categories in the articles were soccer/ football (126, 3.3%), and basketball (36, 1.0%) according to Gau. The order is different in our study from other studies: the most popular sport categories included football (n=29), athletics (n=24) and basketball (n= 10). Popular sports categories can vary according to country. Baseball is very popular in the US, however it is not popular in other countries (5).
Randomized controlled trials reveal an increase in the branch of sports medicine, although is not at the desired level worldwide. Bleakley et al. (8) conducted an analysis of four major sports medicine journals. They identified that 9.5% of the studies were Level I studies (randomized controlled trials). This ratio is a bit higher in other clinical branches. Matteo Paci at al. (9) stated that randomized controlled trials were at a rate of 12.6% in the analysis of physiotherapy professional journals. The ratio is even lower in our country from other countries in the field of sports medicine and other clinical fields. Çınar at al. (10) analyzed emergency medicine articles in the PubMed database. The results indicate that 61% of the studies were original articles, 6% of the studies were randomized controlled trials and 7% of the studies were animal studies, and 17% of the studies were multicenter studies. Our study results were similar to Çınar’s study. Despite the higher rate of original articles (61.6 %), very low rates of level I (13.6 %) and experimental studies (11.6%) have led us to assess the emphasis of publication quality. Almost equal rate of sports/other than sports medicine journals (49/51), and higher rates of multidisciplinary studies indicate that sports medicine much collaborates with other branches in studies related to its interests.
Knee Surgery Sports Traumatology Arthroscopy is the most favorite journal with the rate of 21 and is indexed in the Science Citation Index with high impact factor; and Journal of Sports Science & Medicine was the second most preferred journal, indexed in the Science Citation Index Expanded, and originating from Turkey. It is pleasant to see that a sports medicine journal originated in Turkey is indexed in the SCI-Expanded (SCIE) database and that the most preferred journal is indexed in the Science Citation Index. More contribution from the university hospitals to publications is related to effort of specialists for their careers, and more opportunities of universities for the researches.
As is known, the best scale to evaluate the quality of the publications is the number of citations. Al calculated the number of citations per publication by dividing total citation number to total publication number in his study. He estimated the world’s and Turkey’s means of results as 11.4 and 4.0, respectively, in the field of clinical medicine (11). We have obtained the number of citations per publication as 3.2 by the same calculation on the publications being assessed in our study. According to this result, it can be concluded that a negative image occurs when evaluation is based on citation number. About 21.5% of all publications being assessed in our study have been published in 2016-2017. So we expect that the low citation rates would increase in the next few years. We guess that if existing data is recalculated by this method in five years from now on, a higher result would be obtained, and even perhaps that sports medicine publications might be placed prior to those in the field of clinical medicine.
Using of only a single database is a limitation of the study, but PubMed database is the most often used database for large reviews of scientific accomplishment in the field of sports medicine, and has a wide containment of 5400 medical journals in 39 different languages (12).
In conclusion, an increase was detected in international publication progress in the field of sports medicine in Turkey. While the quantity of original articles was high, the rate of level 1 and animal studies were found to be lower. The quantity and quality of articles need to be improved, and efficient measures should be taken to promote scientific research in sports medicine.

There is no potential conflict of interest relevant to this article.