Objective: Force sense is an aspect of proprioception, which is most commonly assessed by reproducing a percentage of maximal voluntary isometric contraction. Exercise improves other aspects of proprioception such as joint position sense and kinesthesia, but there are contradictory findings regarding the effects of exercise on force sense. The purpose of this study is to assess the effects of long-term weightlifting training on pinch force sense of elite adolescent female athletes.

Materials and Methods: Maximum key and tip pinch strength of 25 elite female adolescent weightlifters and 22 sedentary peers were measured. Participants were asked to press the pinchmeter with 50% of their maximal strength 3 times while looking at the scale and try to learn how much force they apply. Participants then tried to reproduce 50% of their maximum key and tip pinch strength without any visual feedback 3 times. Absolute error, constant error, root mean square error and coefficient of variation were calculated and these values were normalized by dividing to the target values. Accuracy was evaluated by absolute error and root mean square error; directionality of errors was evaluated by constant error and the precision was evaluated by coefficient of variation.

Conclusions: These results demonstrate that regular weightlifting training improves accuracy in pinch force sense, without affecting precision or directionality of error. In future studies, it would be appropriate to investigate whether higher accuracy in force sense would also be evident in adult or senior weightlifters.

Proprioception is defined by Buzzard as the “sixth sense”. A more precise definition would be “the sense of posture, movement and changes in equilibrium, and the knowledge of position, weight, and resistance of objects in relation to the body”(1). Proprioception in general is affected by age, injury, chronic conditions and exercise training (2). Although exercise is known to improve proprioception, whether this improvement is a result of peripheral adaptation, neural plasticity or both remains unknown (3). Force sense is one of the three aspects of proprioception, together with joint position sense and kinesthesia; and it is most commonly assessed by reproducing a percentage of maximal voluntary isometric contraction (4,5). Force sense evaluates one’s ability to detect muscle tension. Accuracy in controlling muscle tension may help athletes to fire muscles when necessary and potentially decrease the chance of injury (6). Although training has beneficial effects on proprioception in general, the effects of training on force sense is not clear due to contradictory findings in the literature. For instance, in Smith and coworkers’ study, it was found long-term gymnastic training improved force sense of elbow flexors (7); however in Netscher and coworkers’ study, patients with ankle instability failed to improve their ankle force sense following a 6-week training program (6).

Joints and movements through which force sense can be measured include but are not limited to ankle, shoulder, knee, handgrip, and pinch strength. Pinch strength is a frequently tested parameter in patients with entrapment neuropathies or traumatic hand injuries (8,9). It is a reliable test measure that establishes a baseline from which to evaluate improvement, assess the efficiency of treatment and set individual goals for each patient (10).

Weightlifting is associated with higher risk of neuropathies at the shoulder, elbow and wrist; such as suprascapular nerve entrapment, musculocutaneous nerve palsy, entrapment of the distal posterior interosseous nerve, cubital tunnel syndrome and carpal tunnel syndrome (11–13). Among these neuropathies, in carpal tunnel syndrome the median nerve is entrapped and the pinch strength is impaired. Weightlifters flex and extend the wrist excessively during training and the hypertrophy of the lumbricals is also associated with median nerve compression in weightlifters (14). Therefore, weightlifters are considered as a risk group for median neuropathy and pinch strength is of special importance in this population, because the target pinch force in the treatment of median neuropathy should be different among weightlifters.

Whether force sense measures of weightlifter adolescents are different than sedentary peers is not clear. In this regard, the purpose of this study is to assess the effects of long-term elite-level weightlifting training on pinch force sense.

This study was approved by Local Ethics Committee (Project number: 2018/1584). Written informed consents were obtained from all individual participants and legal representatives of minors.

Female adolescent weightlifters who have been training regularly for at least 4 years and competed at national and/or international level were recruited for the research. Athletes regularly trained 5 days a week, 3 hours a day at minimum. A typical weightlifting training session of the athletes included snatch, clean& jerk, front full squat and snatch drop movements. Sedentary controls of the same age and sex were also invited to the study as a control group. Participants who suffered from an injury related to hand, wrist, elbow or shoulder within 3 months prior to study were excluded. Also, exercising regularly was an exclusion criterion only for control group.

Pinch Strength Measurement
Tip (two-point) pinch and key (lateral) pinch strength of participants were measured by Baseline™ Evaluation Instruments - Hydraulic Pinch Gauge. Subjects were seated with their shoulder adducted, in neutral rotation, elbow at 90° of flexion, and forearm in neutral position as described by Mathiowetz et al (17). Descriptions of the American Society of Hand Therapists were adopted and used as described in the work of Mathiowetz et al. in this study. Hence, key (lateral) pinch is defined as pad of the thumb against the radial side of the index finger between the distal and proximal interphalangeal joint; whereas tip pinch is defined as thumb tip to index finger tip (10,17). Dynamometer was held lightly by the examiner to keep the instrument in correct position. Participants were instructed to squeeze the instrument as hard as possible for three consecutive times and the best result was recorded as maximal strength.

Data Analysis
Accuracy in force sense was evaluated with absolute error (AE) and root mean square error (RMSE). Directionality of reproduced forces in relation to target load (under-/overshooting) was evaluated with constant error (CE). Precision in reproducing the target load was evaluated with the coefficient of variation (CV). Absolute error is the average of the absolute values of each trial error. Coefficient of variation is the ratio of the standard deviation to the mean. Constant error and root mean square error are calculated according to Formula 1 and Formula 2, respectively. Normalized versions of constant error (nCE), absolute error (nAE), and RMS errors (nRMSE) were calculated by (Error/Target Load*100). Only normalized errors and coefficient of variation were used for comparisons between groups.

Normality of the data distribution was tested by density plots, histograms and Shapiro-Wilk test. Descriptive statistics were used to analyze the demographic characteristics of participants. Student’s t test for normally distributed data and Wilcoxon rank-sum test were used for inferential analyses of non-normally distributed data. The level of significance was set at p <.05. All analyses were performed using R software, version 3.5.1(18). 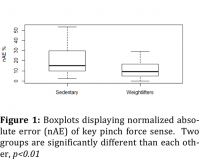 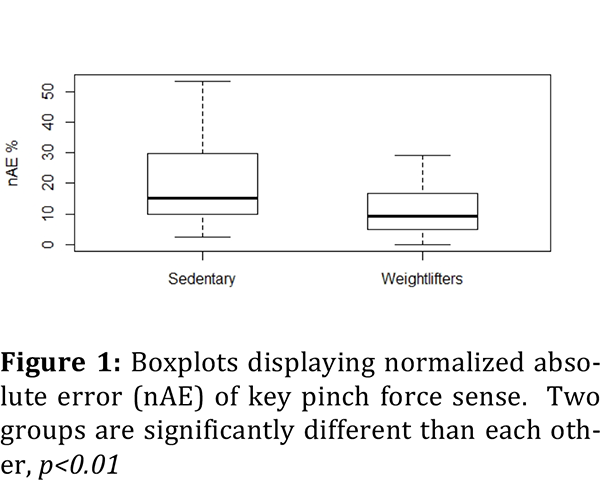 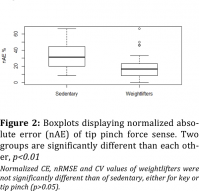 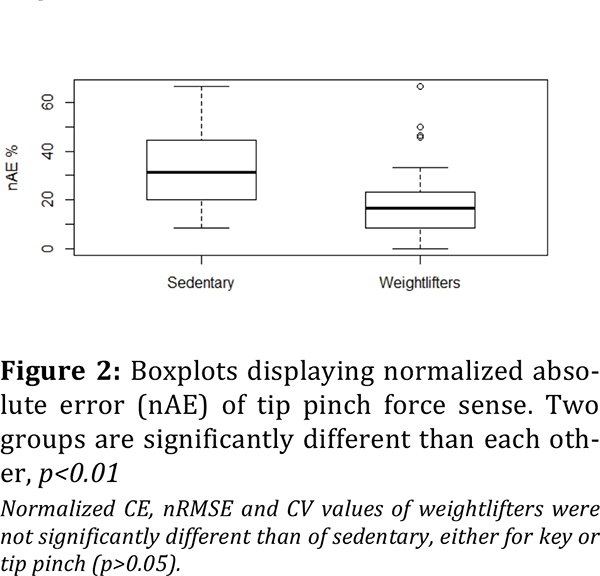 Essentially, in this study it was aimed to investigate the long-term effects of weightlifting training on pinch force sense. Indeed, we have observed that elite adolescent weightlifters display higher accuracy in both key and tip pinch force sense compared to sedentary peers. However, long-term weightlifting training haven’t improved precision in our study. Directionality of error in weightlifters’, namely under-/overshooting also wasn’t different than that of sedentary.

Whether exercise associated improvement in force sense originates from central or peripheral mechanisms is yet to be revealed. There are several peripheral adaptations of mechanoreceptors to training. Muscle spindle reacts to training with some microlevel metabolic changes and with a decrease in the latency of the stretch reflex response and an increase in the amplitude at a more macro level (27). It is also proposed that a disinhibition or decreasing the sensitivity of Golgi tendon organ via strength training is possible and in fact this is part of athletic training (28). On the other hand, central adaptations are also hypothesized to contribute to improvements in force sense. It can be speculated that well-known effects of training, such as alterations in corticospinal excitability and the size of motor evoked potentials may have played a part in higher accuracy observed in weightlifter group (29). Also, repeated practice of a motor skill causes plastic changes in central nervous system, in other words training can increase cortical representation of the joints resulting in improved proprioception (30).

Adolescent female weightlifters had higher tip and key pinch strength values than sedentary controls. Results of this study have also demonstrated that regular weightlifting training improves accuracy in pinch force sense, without affecting precision or directionality of error. The accuracy of force sense in adult or senior weightlifters should also be investigated with further studies.

The Authors declare that there is no conflict of interest.

This research did not receive any specific grant from funding agencies in the public, commercial, or not-for-profit sectors.

We kindly thank all volunteers who participated in our study and the coaches for their kind support.