Objective: Training has different adaptive effects on muscle architecture and body types in the long term. The purpose of this study was to compare rectus femoris architecture and somatotypes of well-trained bodybuilders and soccer players.

Material and Methods: A total of thirty male athletes (15 bodybuilders and 15 soccer players, with at least 5 years of training experience) were included in the study. The thickness of the rectus femoris muscle (MT), pennation angle (PA), and fascicle length (FL) were measured using B-mode ultrasound and somatotyping has been performed by the Heath-Carter method.

Conclusion: Training affects muscle morphology and somatotype of athletes with regard to sport specific training patterns in long term. Revealing the adaptive characteristics of muscle architecture and somatotypes may help sports scientists and coaches in train planning and modification.

Several longitudinal studies in the literature have examined the effects of specific training or physical activity on muscle architecture (i.e., muscle thickness, pennation angle, and fascicle length) (1, 2). One of the widely accepted theories is that resistance training changes the muscle architecture (3). In addition, specific exercises such as stretching have been found to produce significant changes in the architectural structures of the muscle (4). Muscle architecture has an adaptive capacity depending on the type of long-term training (5).

The muscle develops different adaptations depending on the type of training in 10 weeks (6). McKendry et al. found that master endurance athletes (67.1±4.1 years) had significantly greater fascial length of the gastrocnemius medialis than the control group (69.8±4.1 years) (7). Brughelli et al. investigated the differences in muscle architecture (vastus lateralis) between 9 endurance cyclists and 9 Australian Rules Football players (ARF) (at least 3 years of training) and reported that the ARF players had a significantly smaller pennation angle (19.3±2.0 vs. 24.9±2.5°) and greater fascial length (7.9±0.7 vs. 6.2±0.8 cm) compared to the cyclists (8). The studies show that long-term training with different content causes significant differences in muscle morphology of athletes.

Somatotype represents body type and is classified as endomorphy, mesomorphy, and ectomorphy (9). It has been found that the components of somatotype are different in athletes with many years of sports experience and different training content (10). For example, Bayios et al. found the somatotype scores of elite Greek female athletes in volleyball as (3.4-2.7-2.9), basketball as (3.7-3.2-2.4), and handball as (4.2-4.7-1.8) with at least 8.8 years of training experience (11). In another study examining highly experienced athletes at the international level, kayakers were predominantly endomorphic, basketball players were endomorphic, and soccer players were ectomorphic (12). When examining the long-term effects of sport on somatotype components, dominant energy metabolism can be cited as the mechanism of action. After a 12-week aerobic training program (two sessions per week), a significant interaction was found between somatotype and aerobic training (p<0.001), the meso-ecto and meso groups showed the greatest improvements in aerobic capacity (13). A positive correlation was found between mesomorphy and anaerobic performance (3 RM bench press and squats; r =0.560; r=0.550, p<0.001, respectively) (14). Training content influences athletes' phenotypes and this effect can be more pronounced in the long term. To our knowledge, no previous studies have compared muscle architecture and somatotype components between highly trained male soccer players and body builders.

A cross-sectional study was conducted to investigate the differences between bodybuilders and soccer players. The study consisted of measuring muscle architecture and somatotype components. Before the ultrasonography and anthropometric measurements, participants were asked not to exercise for at least 72 hours and to maintain their daily eating habits. Both measurements were performed on the same day.

Sample size was determined by a priori power analysis using G-Power (3.1.9.3). The effect size was based on previous studies that reported an effect size of fascial length of the lateral vastus (ES = 2.27), pennation angle (ES = 1.96), and muscle thickness (ES = 0.91) between 100-m sprinters and long-distance runners (15). An effect size of 1.7 was considered a reasonable and conservative starting point for determining the sample size. The type I error (α) was 0.05, and the power (1-β) was 0.80 with an in a two-tail independent t-test. The model indicated a minimum total sample size of 22 subjects, but considering a miss rate of 30%, we decided to have a total of at least 30 participants. A total of fifteen bodybuilders (age = 22.88 ± .92 years) and fifteen soccer players (age = 22.44 ± 1.13 years) were included in the study. Participants had no musculoskeletal problems, lower extremity surgeries, or injuries that could affect architecture and had regular, branch-specific training habits for at least 5 years. This study was approved by Inonu University (2017/60). Each participant voluntarily provided written informed consent prior to participation. All procedures were in accordance with the 2008 Declaration of Helsinki.

All measurements were performed with minimal clothing and no shoes. Participants' height was measured with a portable stadiometer (Seca Ltd., Bonn, Germany) with an accuracy of 0.1 cm, with the head in the Frankfort plane, while the body was upright and the weight was evenly distributed on both legs. Weight and body fat percentage were measured using a body composition scale with a capacity of 270 kg and a sensitivity of 100 g (Tanita SC -330S, Amsterdam, The Netherlands). Skinfold thickness was determined using the Skinfold Thickness Meter (Holtain, UK) to calculate the somatotype component. Circumference and bicondylar width were determined on the right side of the body using a Gulick anthropometric tape and a Lafayette anthropometric caliper, respectively.

In determining the somatotype, the Heath-Carter method was used (9), and 3 general body types were determined.

where X=sum of triceps, subscapular and suprailiac skinfold and for height corrected endomorph multiplied by 170.18/body height in cm.

A real-time B-mode ultrasound device (Logiq P5, Diasus Dynamic Imaging Ltd, Scotland, United Kingdom) was used to measure muscle architecture with a 40 mm, 8-MHz linear-array transducer to measure pennation angle, fascicle length and muscle thickness of the rectus femoris. Imaging was conducted supine, with the rested leg supported in passive extension. Rectus femoris muscle thickness and pennation angle were measured with the probe placed transversely and longitudinally, respectively. The transducer was placed with adequate use of contact gel and minimal pressure to avoid excessive compression of the muscle at 50% of the distance from the superior border of the patella and great trochanter. Pennation angle was determined as the angle between the muscle fascicles and the deep aponeurosis. Muscle thickness was determined as the distance between the superficial and deep aponeurosis. Fascicle length across the deep and superficial aponeurosis was estimated from isolated muscle thickness and pennation angle using the following equation:

where α is the pennation angle of the muscle as determined by ultrasound (16). Three ultrasound images were acquired from each trial, and the average of the three values for each variable was used for further analysis. All measurements were performed by the same experienced ultrasonographer. Intra-rater reliability for muscle architecture was assessed using the intra-class correlation coefficient (ICC). ICCs were 0.997 for PA and 0.999 for MT and 0.989 for FL.

All statistical analyses were performed with SPSS statistical software version 23 (SPSS, Chicago, IL, USA). The distribution of data was assessed with the Shapiro-Wilk test. A student T-test for independent samples was performed to compare architectural and somatotype values between soccer players and bodybuilders. Effect sizes (Cohen's d) and 95% confidence intervals (CI) were calculated to evaluate the difference between groups. Effect size values (ES) were: < 0.2 trivial, 0.2-0.6 small, 0.6-1.2 moderate, 1.2-2.0 large, and >2.0 very large and >4.0 extremely large. The alpha level for statistical significance was set at p <0.05.

There was no significant difference between groups in terms of demographic parameters and training history (p>0.05) (Table 1).

Table 1. Comparison of demographic parameters between the groups
×

Table 2. Comparison of body composition and somatotype components between the groups
× 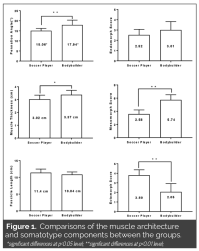 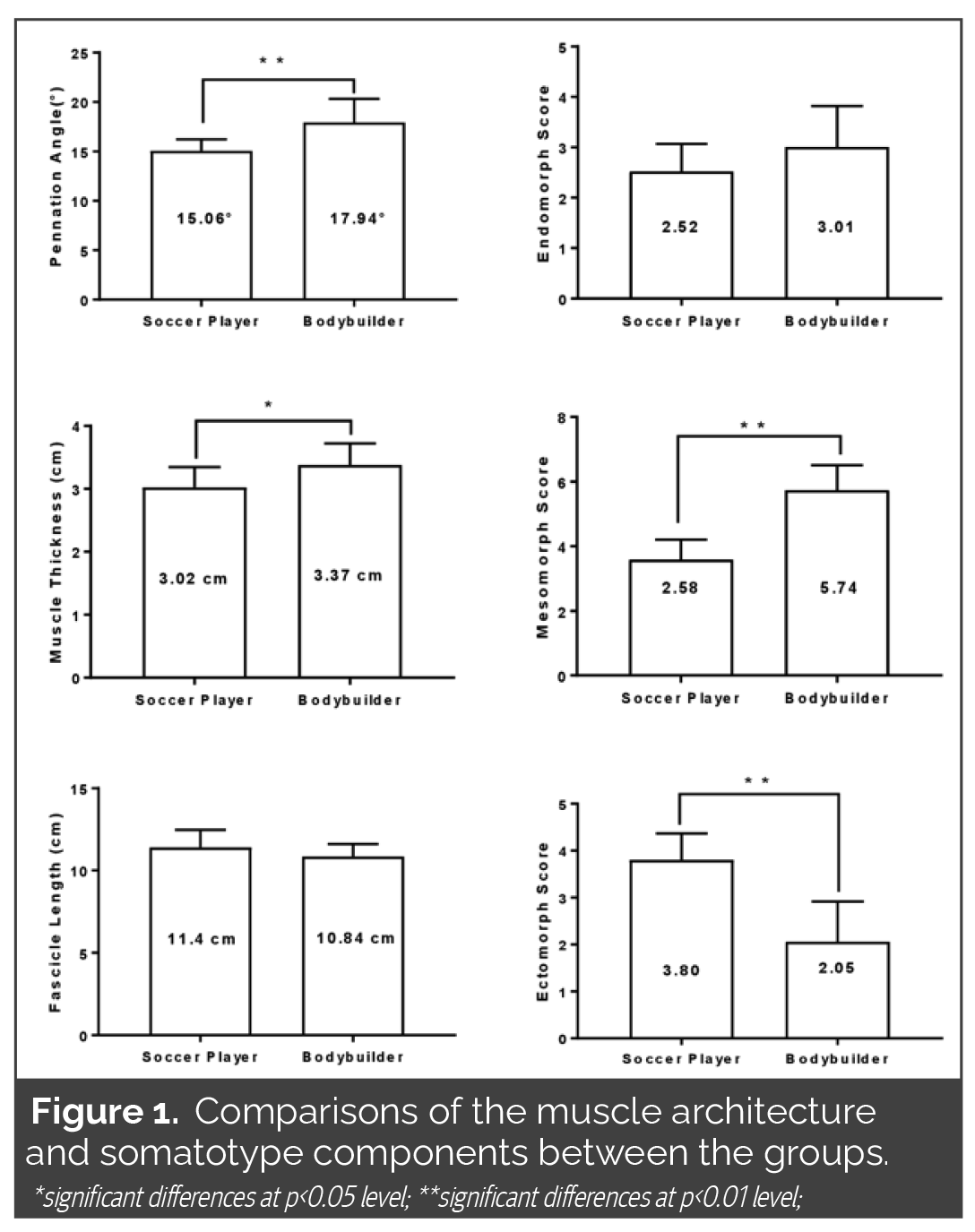 Table 3. Comparison of muscle architectural parameters between the groups
×

In the present study, it was found that the values of PA and MT were significantly smaller in soccer players (p<0.05). This result could be due to the fact that parameters such as strength, speed, and agility are considered necessary basic skills in soccer (17). The smaller PA increases the potential for overall muscle shortening velocity, as muscles with longer fibers shorten at greater absolute velocities than a similar muscle with shorter fibers (18). Similar results were also found in a study comparing sprinters and long-distance runners. Elite male sprinters were found to have a greater fascicle length and a smaller PA than elite male long-distance runners (15). A larger angle may be associated with a slower contraction velocity. Therefore, a higher PA value of a muscle may negatively affect its potential to produce maximal velocity (19). Therefore, soccer players with a smaller pennation angle may have a mechanical advantage at the point of force transmission to the tendon (20).

On the other hand, PA and MT were reported to have a positive correlation with muscle strength scores (21). Muraki et al. found a significant positive correlation between muscle strength and muscle thickness in adult males (22). Stragier et al. found that the increase in 1RM load was associated with the increase in muscle thickness (r2=0.38; p<0.001) (23). In terms of bodybuilding, greater muscle thickness could be beneficial in lifting heavier loads and in power output. Bodybuilders with higher MT and PA values may have an advantage for force output. Following 10-12 weeks of strength training, the MT and arm circumference of bodybuilders were increased (24).

In this study, a very large effect size for mesomorphy (ES =3.11) and ectomorphy (ES =2.41) was found between the groups. It is believed that the values obtained in relation to somatotype and architectural structures also influence each other. In a study, underweight individuals were found to have a smaller PA and cross-sectional area than overweight individuals (32). In another study, it was found that the MT and PA values of five muscles were significantly higher in obese participants than in non-obese participants (33). The relationship between muscle architecture and somatotype components was not examined in this study. However, the fact that soccer players have smaller PA and MT and are also ectomorphic may be a noteworthy finding to be investigated in further studies. Energy metabolism in each sport could also influence the expression of the dominant body type. Bodybuilding has a large proportion of training content based on explosive strength for muscle hypertrophy, which includes high repetitions with few rests between sets (34). More than 90% of energy expenditure in soccer is aerobic (35). Somatotypes may be related with the predominant energy metabolism in these two sport branches. Many other parameters can be mentioned (contraction type, race, nutritional status, etc.), but the predominant energy system related to the training content should also be considered in terms of somatotyping.

There are several limitations of this study. Muscle architecture can be influenced not only by training practices but also by dietary habits, sleep patterns, and muscle diseases. Therefore, it is recommended to standardize these factors between groups in longitudinal studies. In addition, we were not fully informed about the actual training content of the groups. Despite these limitations, this study provides some evidence that skeletal muscle and body composition changed in athletes with different training characteristics in long term.

Approval for this study was obtained from the Institutional Ethics Committee of Inonu University, Malatya, Turkey (Decision No: 2017/60 Date: 10/05/2017).