Materials and Methods: Epidemiologic characteristics of professional male football players participating in the professional first division Turkish Super League in 10 consecutive seasons were evaluated through a publicly available online soccer archive. Exposures in matches, as well as training, were calculated.

Conclusion: Epidemiologic data is important as a resource for athletes and those responsible for their health to develop appropriate training and preparation programs to reduce the risk of ACL injury.

Anterior cruciate ligament (ACL) rupture is a potential career threatening injury in football players (3). Only one third of the professional football players can return to pre-injury level of sports competition after 12 months of rehabilitation (4). Only 65% of players can return to top-level sports competition 3-years after ACL injury (5). Time to return to sports is highly variable, between 9 to 12 months (6).

After a musculoskeletal injury, athletes may enter a vicious disability cycle known as continuum of disability (7). It has been associated with poor sensorimotor control and susceptibility to secondary injuries (8). The need for optimum preventive programs remains important. Accordingly, comprehensive epidemiologic data is important in the optimization of these programs.

We hypothesized that a-) injury incidence rate would be similar to that reported in the previous reports and the teams ranked higher and lower on final placement, and b-) the distribution of injuries is concentrated in certain time periods during the season and pre-season.

Patients or the public were not involved in the design, or conduct, or reporting, or dissemination plans of our research.

Turkish Super League is consisted of 18 teams; all teams play each other 2 times within entire season (From August to May, total of 34 matches for every team). At the end of the season, the highest ranked 1 or 2 teams participate in the UEFA champions league (UCL), the most prestigious European football tournament including highest ranked teams of individual leagues, in the subsequent season. Subsequent 3 teams (3rd, 4th and 5th ranked teams at the end of season) participate in UEFA Europa league (UEL). All teams are also involved in the national Turkey cup (NTC) in a knock-out format. Due to their progressive nature, the number of matches played in the UCL, UEL, and NTC varies. Also, limited number of players are involved in their national teams to participate in various competitions such as World Cup, Euro Cup, Asian Cup, African Cup, Copa America, or Confederation Cup.

Player data were accessed on a publicly available internet platform transfermarkt.com (Transfermarkt GmbH & Co KG) and the Google® search engine. An informed consent was not needed. Also, an ethical committee approval was not needed. Two investigators independently searched and systematically saved the detailed player, match, and injury data. The technique we used was previously validated by Leventer et al. (8) with more than 90% interobserver agreement and 0.82 kappa for cross-validation.

Ten consecutive seasons were progressively accessed. Eighteen teams were individually evaluated in each season regarding ACL injury reports. A further confirmation was performed on online search engine. Players were analyzed in more detailed fashion in the presence of ACL injury (ACL rupture).

Anthropometric characteristics, injury characteristics, match characteristics, team characteristics, and timing of injury were extracted by each investigator individually. Injuries were classified based on the occurrence during Super league, Cup, national team, and training. Injuries occurred in the friendly matches were included in training category. Previous injuries such as ipsilateral or contralateral ACL injuries and concomitant injuries (if available) were recorded.

In the calculation of risk exposure while playing football, total number of matches played by each time in each season were calculated and subdivided in the different competition in which one or more teams participated. The risk exposure of each player during training was approximated considering the annual average exposure of a Turkish Super League middle-rank team that participated in more than half of the seasons analyzed. Finally, the number of players on each team in each season and the final placement of each team in the seasonal rankings were obtained, as well. Since the first 1 or 2 teams in the final rank from the Turkish Super League are allowed to participate in the UCL, and subsequent 3 teams are allowed to participate in the UEL,

we defined high-ranked teams as those classified from 1st to 5th position, while low-rank teams were those classified from 6th to 18th position. Based on the data obtained, several epidemiological measures of ACL injuries were calculated, according to Knowles et al. (12) (Table 1 and 2). The incidence rates were defined as the number of injuries divided by the total person-time at risk (i.e., athlete-exposure during matches or training) (12). The incidence proportions were defined as the number of new injuries divided by the total number of athletes at risk during a specified time period (i.e., team-season or league-season) (12).

Table 1. ACL injury distribution and incidence rates across the 10 seasons according to different exposuresPhysical characteristics of the participants
×

Table 2. Match and injury characteristics of anterior cruciate ligament injuries based on team rank in the Super League
×

Mean, standard deviation, range, raw number, and percentage were used in the presentation of descriptive statistics. The distribution of data was assessed using Shapiro-Wilk test. Independent samples t-test and analysis of variance were used in the comparison of continuous variables. Chi-square test was used in the comparison of categorical variables. A rate ratio (RR) and 95% confidence interval, and significance was tested using the z-statistics (5). A p value <0.05 was considered statistically significant. SPSS v24 (IBM, NY, USA) was used in the analyzes. 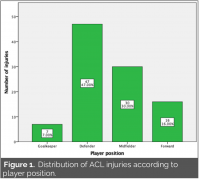 Figure 1. Distribution of ACL injuries according to player position.
×

Figure 1: Distribution of ACL injuries according to player position. 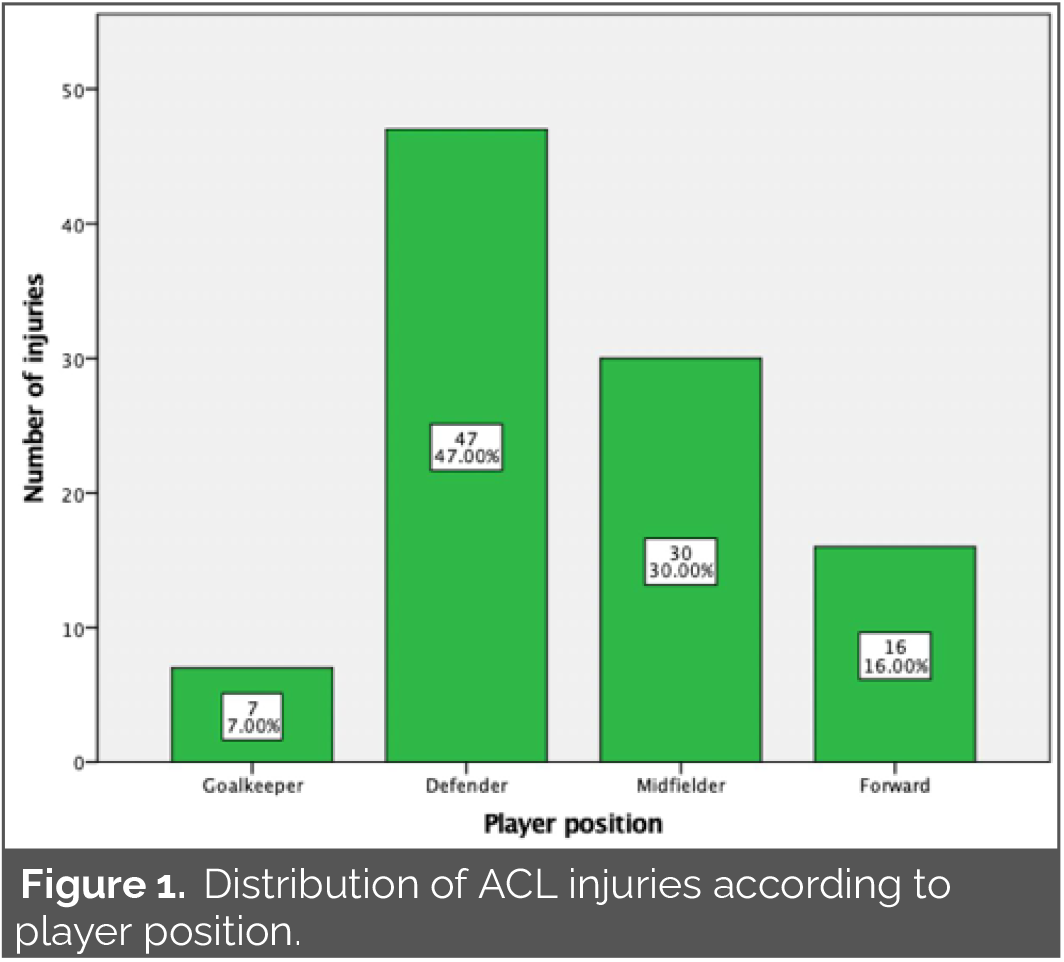 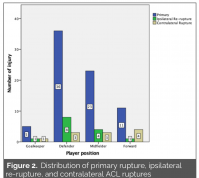 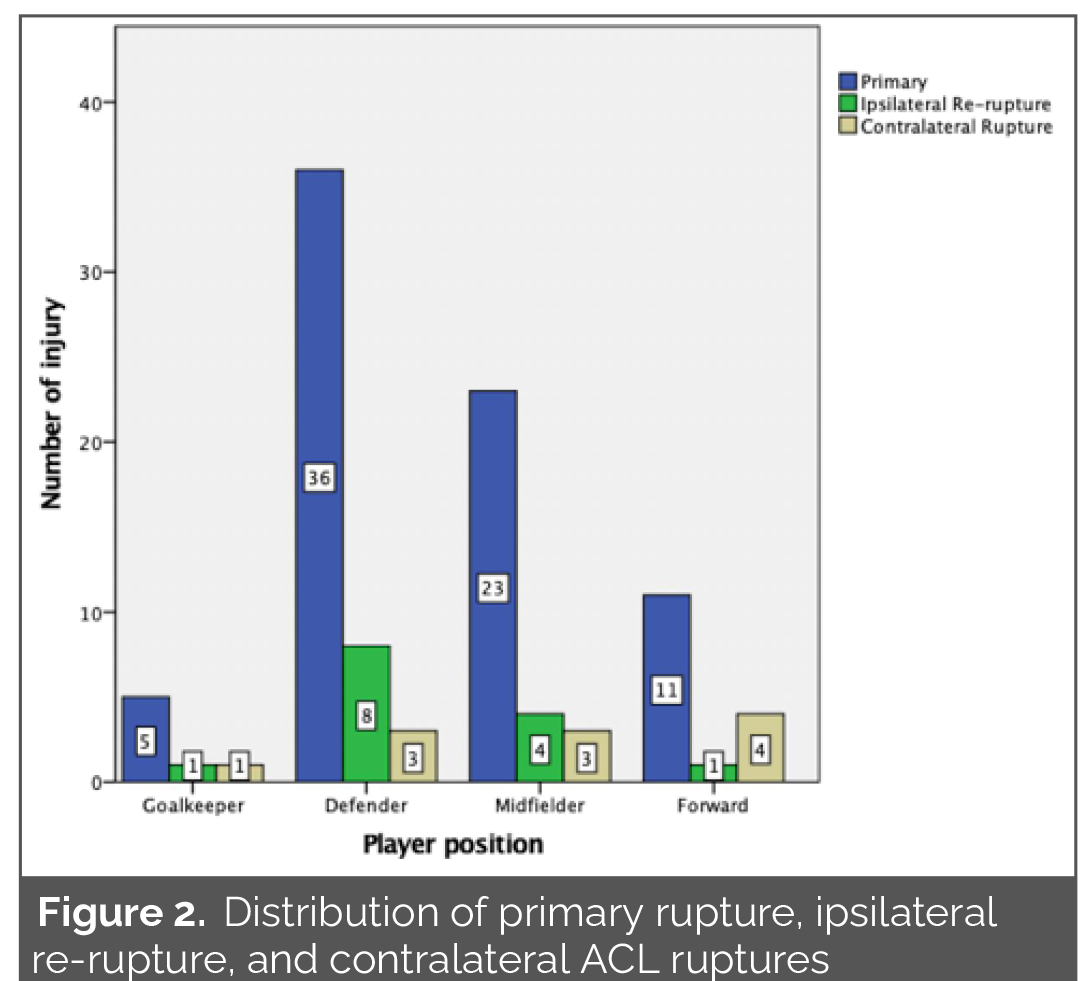 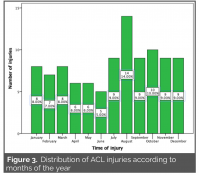 Figure 3. Distribution of ACL injuries according to months of the year
×

Figure 3: Distribution of ACL injuries according to months of the year 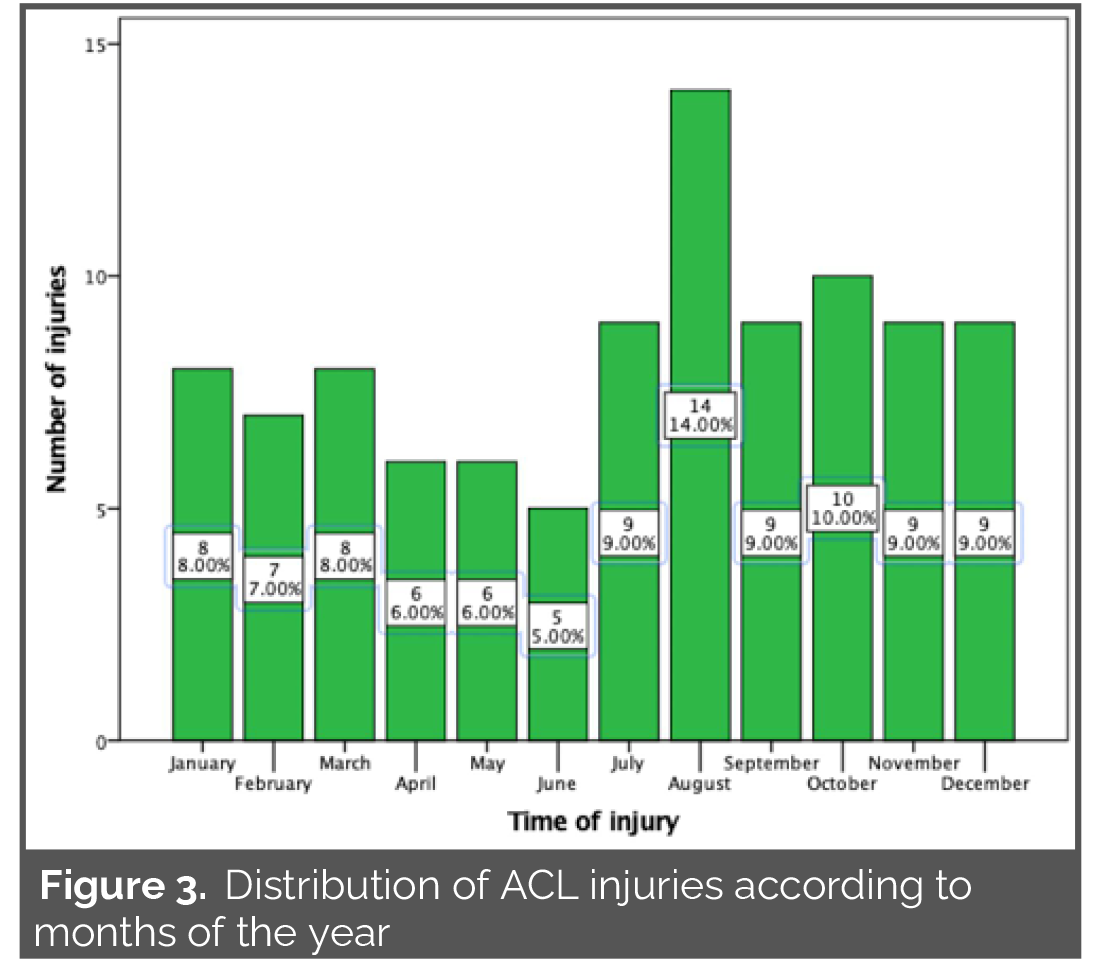 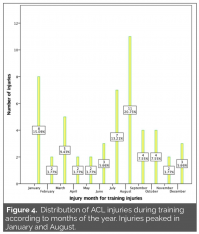 Figure 4. Distribution of ACL injuries during training according to months of the year. Injuries peaked in January and August.
×

Figure 4: Distribution of ACL injuries during training according to months of the year. Injuries peaked in January and August. 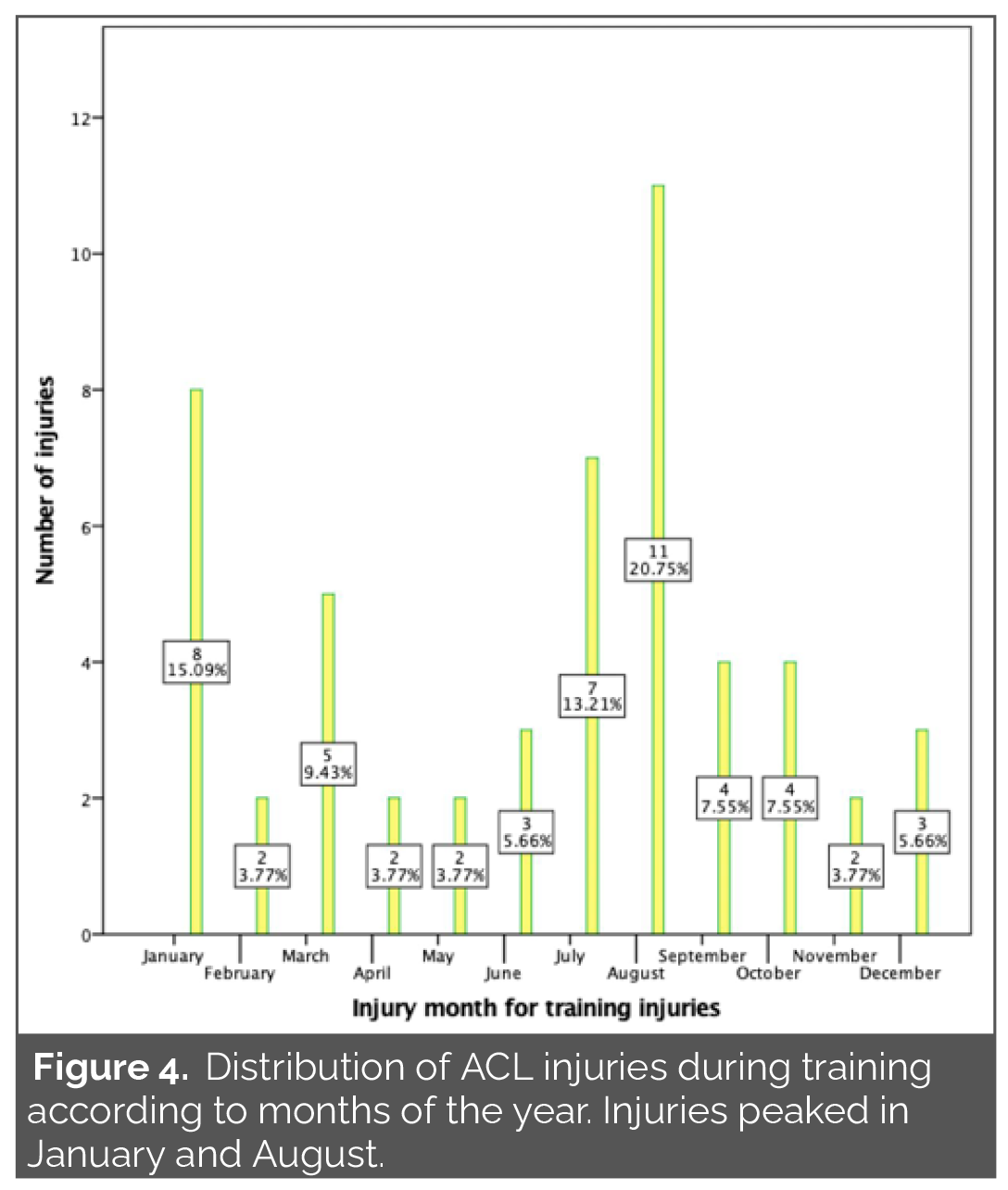 Previously, the mean age at the time of ACL injury was reported between 25.0 and 25.3 years (3,9,11,13). Similarly, we found the mean age of injured players as 25.2. The most common player position that is associated with ACL injury was reported as defender (3,14). Grassi et al. (3) reported 47% rate of ACL injury in defenders played in Italian Serie A. In our study, 47 of 100 ACL injuries (47%) were defenders. It may be associated with more pressing in defending position than other positions.

Significant number of ACL ruptures (both re-rupture in the ipsilateral side and primary rupture in the contralateral side) occur in patients with a previous ACL reconstruction (15,16). In their series, Grassi et al. (3) reported that 25% of ACL ruptures in 84 Italian Serie A players had a previous ACL rupture and reconstruction history. They also reported 15% rate of reinjury and 10% of contralateral injury. In a meta-analysis including various sports and levels performed by Wiggins et al. (16), 23% rate of second ACL injury was reported in players younger than 25 years of age. In our study, 24 of 100 players (24%) had a previous ACL injury and reconstruction. Of these, 13% were ipsilateral re-rupture and 11% were contralateral injury. According to previous reports and our findings, preventive strategies including anatomical risk factors and rehabilitation techniques responsible for the ipsilateral or contralateral injuries should be taken into consideration in professional male football players to decrease injury rate.

Previously, a bimodal peak was reported regarding the distribution of ACL injuries (3). In Italian Serie A, clear peaks were identified in October and March (17). Similarly, in French League 1, bimodal peak was identified in November and March (18). In contrast, one peak in August was found in Turkish Super League. Also, January and August were the most common time for ACL injury during preparation. The relevant number of injuries during pre- and mid-season preparation and at the beginning of the season may be associated with lack of physical readiness and stress for multiple competitions. Working on pre- and mid-season preparation programs and readiness tests that will ensure optimal physical and mental preparation of players will help reduce the risk of ACL injury.

There are several limitations that should be acknowledged. First, the data was recruited from a publicly available database. Having the direct injury reports would give more objective results regarding the injury risk during training. Second, the exposure time was calculated as an estimation. Direct data including the training details could affect calculations. Third, individual injury videos were not watched. Injury mechanism and possible factors associated with increased ACL injury risk would be identified using video analysis. Finally, the data obtained from publicly available database are not confirmed with hospital records and Turkish Football Association records.

Epidemiological data is important as a resource for athletes and those responsible for their health to develop appropriate training and preparation programs to reduce the risk of ACL injury.

Ethics committee approval is not needed due to publicly accessible data interpretation.