Objective: The purpose of this study was to analyze the sagittal plane variations of intraarticular landmarks for single bundle anterior cruciate ligament (ACL) reconstruction including lateral meniscus, medial and lateral tibial eminencies.

Methods: T2 weighted sagittal magnetic resonance (MR) scans of 80 skeletally mature patients aged between 18 to 60 years and without any sign of ligament and meniscal injuries were viewed. Midpoint of ACL, most posterior aspect of anterior horn of lateral meniscus (LMAH), tip of medial eminence (ME) and lateral eminence (LE) were identified on widest antero-posterior (A-P) distance of tibial plateau according to of Staubli-Rausching method and variances were compared.

Anterior cruciate ligament (ACL) ruptures are one of the most common injuries among athletes and incidence of this disabling injuries is steadily increasing (1). Anatomical reconstruction has become the main stream treatment modality of this injuries as it provided superior clinical outcomes compared to non-anatomic reconstructions (2-4). Identifying the center of ligament insertion on both tibia and femur is of upmost importance during single bundle anatomic reconstructions (5, 6).

Femoral insertion of ACL attachment was extensively investigated in the past decades, however tibial insertion of the ACL has not attracted the same attention. Several landmarks have been proposed for correct tibial tunnel placement, including posterior cruciate ligament (PCL) (5), back ridge of the knee (7) and medial tibial eminence (8). Posterior border of the anterior horn of lateral meniscus (LMAH) is the most commonly used anatomic landmark for placing the tibial tunnel and assumed to be naturel landmark for the center of tibial footprint for single bundle anatomic reconstruction (2). However, recent anatomic and radiological studies have challenged this assumption and reported inconsistent relationship between center of tibial footprint and LMAH due to variable anatomy of lateral meniscus (9).

Sagittal location of ideal tibial tunnel has been described based on limited sample size cadaveric studies with different measurement methods (10, 11). However, in current attempts for individualized ACL reconstruction, number of studies regarding relationship between relevant landmarks and center of ACL tibial insertion are quite limited. Furthermore, anatomic variances of local anatomy have not been studied extensively. The aim of this study was to report relationship between anterior-posterior location of ACL tibial insertion and to investigate bony and soft tissue landmarks including, LMAH, medial and lateral eminences.

This study was approved by Koc University Faculty of Medicine ethics committee with an IRB number of 2020.213.IRB1.063 and waived to obtain informed consent.

Institutional MRI data repository was retrospectively viewed to enroll 40 MR image of adult male knees. Age and body mass index matched cohort of 40 MR image of adult female knees were additionally enrolled. Inclusion criteria were skeletally mature patients aged between 18 to 60 years and without any sign of ACL, PCL, collateral ligament and meniscal injuries. Patients with significant osteoarthritis, history of an ACL or meniscal surgery were excluded. All MR imaging were performed with a 1.5 Tesla GE MR in a standard position with a leg positioner to avoid any rotation of the extremity. Consensus readings of one researcher and one radiologist were used to confirm eligibility of knee MR scans.

T2 weighted sagittal scans were analyzed by an independent researcher on GE Healthcare PACS viewer with an accuracy of 0.1 mm. The most anterior and the most posterior aspect of the tibial plateau was marked on separate scans according to the method of Staubli and Rausching (10). Then these scans were superimposed to capture the widest portion of tibial plateau perpendicular to mechanical axis of tibia. Next, perpendicular lines were dropped from the most anterior part and the most posterior part of ACL tibial footprint and then ACL midpoint was identified. The distance of ACL midpoint in relation to the measured distance of the tibial plateau in an anterior-posterior direction was measured as a percentage, so no magnitude correction was needed. (Figure 1) On separate scans, posterior border of the anterior horn of the lateral meniscus (LMAH), tip of medial (ME) and lateral eminences (LE) were identified and same measurement method was repeated for each parameter. (Figure 2) 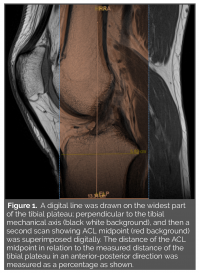 Figure 1: A digital line was drawn on the widest part of the tibial plateau; perpendicular to the tibial mechanical axis (black white background), and then a second scan showing ACL midpoint (red background) was superimposed digitally. The distance of the ACL midpoint in relation to the measured distance of the tibial plateau in an anterior-posterior direction was measured as a percentage as shown. 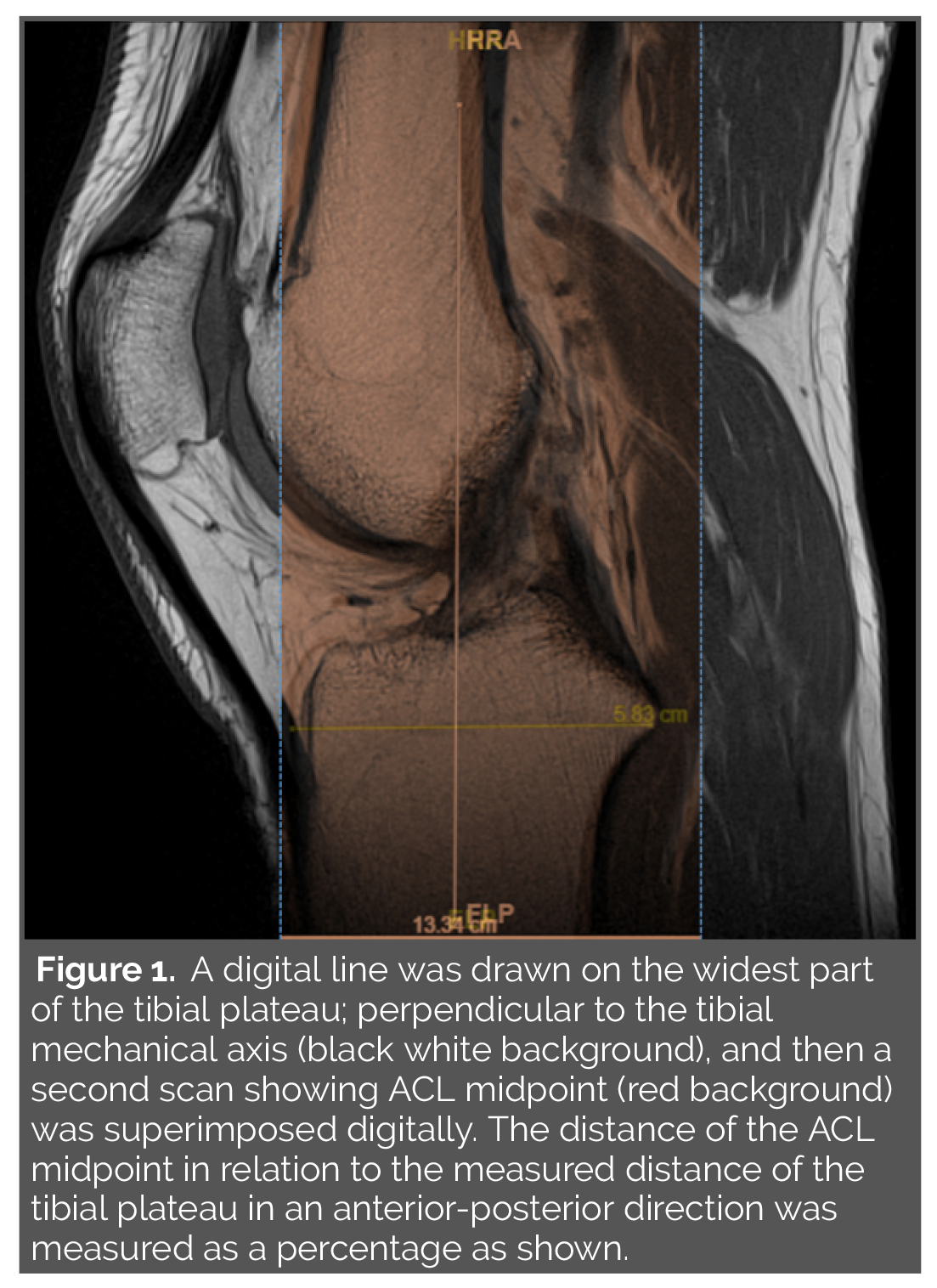 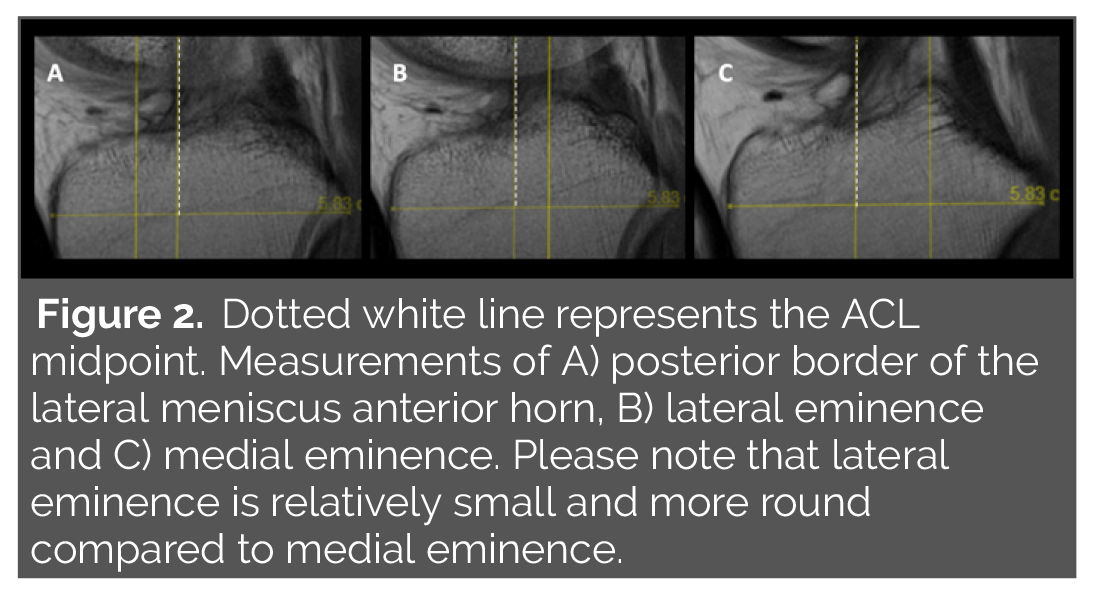 A priori power analysis revealed that, at least 44 patients were needed to test the hypothesis with an effect size of 0.5 and type I error of 5% that meets the power requirement of 0.90. Sample size rounded up to 80 to further power the results and decrease type II error rate. Statistical analyses were performed using SPSS software version 21.0.0 (IBM Corp, Armonk, New York).

Descriptive statists were used to express the location of ACL midpoint and other relevant landmarks on sagittal plane. Normality of the data was verified with Shapiro-Wilkins test. Two sample t-test with pooled variances were used to average percentages of study parameters. Levene’s test with F distribution was used to compare the variances of ACL midpoint with LMAH, ME and LE. Partial eta-squared values (η2) were obtained to calculate effect size (f) with the following formula f2 = η2/ (1 − η2). Effect sizes were interpreted as f = 0.1 is a small effect, f = 0.25 is a medium and f = 0.4 is large effect according to Cohen et al. (12) Intraclass correlation coefficients (ICC) were calculated using two-way random model with 95% confidence intervals (CI) to determine intraobserver and interobserver agreement of measurements. Level of significance was set .05 and all values were two-tailed if otherwise indicated.

Figure 3. Confidence intervals for the average of deviations
×

Figure 3: Confidence intervals for the average of deviations 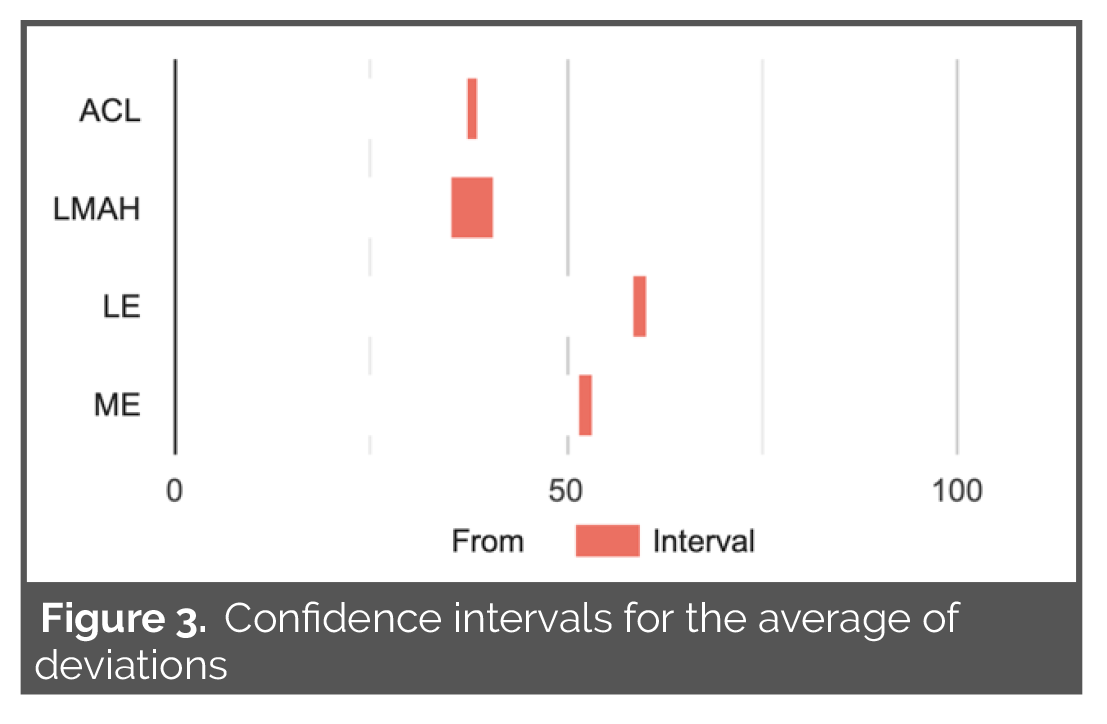 Intra and interobserver agreement for measurement of ACL-midpoint, LMAH, ME and LE showed moderate to good agreement with ICC values presented in Table 1.

A lot of effort has been spent for years to identify the footprint centers to perform anatomic ACL reconstructions. On sagittal plane, placement of tibial tunnel more anteriorly on tibia may cause notch impingement of the graft whereas placing posteriorly may cause posterior cruciate ligament impingement (13). Using the posterior border of LMAH as a tibial tunnel landmark was defined by Jackson and Gessler and later corroborated to be a useful intraarticular landmark for determining the midpoint of ACL tibial footprint (3, 5, 14). In a cryosectional and magnetic resonance arthrography study, Staubli and Rauschning reported that ACL midpoint was located at 44% of the total midsagittal diameter from the anterior margin of the tibia (10). Several cadaveric, radiographic and three-dimensional computed tomography studies have evaluated this measurement and reported that the center of ACL tibial footprint was located at average A-P distance of 38.5 % to 40.7 %, with outliers (2, 15-17). A systematic review of studies that investigated Staubli and Rauschning method showed that the weighted mean of the tibial footprint center in the A-P distance was 42% and 5thand 95th percentiles were 39% and 46%, respectively (18). In our study, ACL midpoint was found to be located at 38.0±4.2% (range, 29-51%) similar to the previous reports. However, LMAH was found to be between 21% to 62% of the A-P distance of the tibial plateau, and difference of variances between ACL midpoint and LMAH was large enough to be statistically significant (p=<.001, f=0.59). Substantial anatomic variations of the both lateral meniscus and ACL tibial attachment may explain this mismatch (8, 19, 20). Furthermore, a former partial meniscectomy of the anterior horn of the meniscus may change anatomy and make it a less reliable landmark (8). Therefore, reproducible methods are required to determine the anatomic sagittal location of the ACL tibial tunnel.

Edwards et al. (7) first described the lateral face of ME as a reliable landmark for anatomic ACL reconstruction, but only as a medial-lateral parameter. Authors suggested that due to proximity of these two anatomic structures, the distances between the ME and the centers of the ACL attachments did not vary significantly, despite the range of overall knee sizes. In a cadaveric study by Ferretti et al. (8) it has been reported that the medial tibial eminence demonstrated less variability and had a constant relationship with the center of the ACL when compared with the lateral meniscus. However, this study was performed on eight cadaveric knees and the accuracy of their findings were limited. To the best of our knowledge, current study is to first to analyze variations of LMAH and tibial eminences in relation to ACL tibial center on MR images. Both medial and lateral eminences showed relatively small variances compared to variances of LMAH. Findings of this study validate the recommendations of Ferretti et al. (8) in a larger sample size.

We recommend to reevaluate the LMAH as an intraarticular reference point for anatomic ACL reconstruction. A more predictable tunnel position may be determined with the use of bony landmarks when footprint is not clearly visible during arthroscopic surgery. Although this study does not specifically investigate the outcomes of tunnel positioning according to aforementioned landmarks, previous reports suggested improved outcomes with rather anatomic ACL reconstructions (21). Currently, navigation assisted surgeries are gaining attention in every field of medical practice and treatments are tend to be tailored according to patients. Our findings may be helpful to develop software algorithms that set correlation between the tibial eminencies and the ACL midpoint. Nonetheless, we agree with previous reports suggesting that ACL tunnel placement should be individualized as ACL tibial insertion is variable between patients (7-9, 20, 22).

This study has some limitations worth to mention. First, this study is based on MR images and further validation is needed with large sampled cadaveric studies. Secondly, all reference points were marked on different scans and our measurement technique may prone to errors. However, ICC values showed moderate to good agreement in repeated measurements. Thirdly, we did not analyze the sagittal-oblique scans of ACL, which would be very helpful to detect ligament injuries. But our series included knees without ligament injuries and we thought that results obtained from standard knee images might be more generalizable compared to oblique images. Finally, coronal plane analyzes of landmarks have not performed in this study, but further research is needed to determine the impact of variances of eminencies on medial-lateral positing of tibial tunnels.