The diagnosis and management of subarachnoid hemorrhage are well documented in the literature but there is limited research published on returning safely to contact sport following hemorrhagic stroke. A search of PubMed database was completed and of the identified articles none outlined return to sport, especially contact sport considerations. The following case outlines return to contact sport considerations following a subarachnoid hemorrhage in an elite, junior ice hockey player. A 17-year-old male was diagnosed with a left middle cerebral artery aneurysm and subarachnoid hemorrhage. Following endovascular coil obliteration, the patient completed 3 months of relative rest and non-contact conditioning during which coil stability, neurological status and symptoms were monitored. The patient gradually returned to junior then pro-level hockey with no future aneurysmal complications (8 years post event) or subsequent instances of traumatic brain injury (concussion). This case showed an uneventful return to elite level contact sport following 3 months of rest and could guide future cases.

The incidence of spontaneous subarachnoid hemorrhage (SAH), a subtype of stroke, continues at six to eight per one hundred thousand persons per year (1). Despite that the fatality rate of SAH has decreased over time, reported fatality rates remain high (between 32% and 67% of cases) (2). SAH also contributes to significant morbidity and disability with only 35.2% of cases returning to their previous level of work (3). Re-bleeding and vasospasm following SAH are major concerns with the highest rates of re-bleeding occurring within 72 hours of the initial hemorrhage (5-10%) (4). Compared to other strokes, SAH incidence patterns are more complex. Higher incidence rates occur at younger ages and in women.
SAH precipitated by sport is not very frequent and is uncommonly related to trauma (5). In a review of a SAH registry between 1995-2014 of 738 cases, 424 were preceded by physical activity but only nine were preceded by sport, specifically running, aerobics, cycling, body balance, dance, surf and windsurfing (5). A proposed explanation for increased rates of SAH associated with physical activity is related to Valsalva manoeuvres or activation of the sympathetic nervous system with an increase in blood pressure and heart rate (5).
There is no research published on returning safely to contact sport following spontaneous SAH. A title and abstract search of PubMed database for human, English articles relating to SAH, sport, and return to play was completed. Of the 223 articles, none outlined return to sport, especially contact sport considerations.

Written informed consent was obtained from the patient for publication of this case report and accompanying images.
A seventeen-year-old male, amateur elite hockey player presented with a severe headache during the last minute of an Ontario, Canada junior level ice hockey game. The patient, playing left wing, had not experienced any specific trauma during that game or the few days prior. He additionally, did not have a previous history of traumatic brain injury (concussion) at any point in his life. Off the ice, he vomited twice with partial relief of his headache. The patient was observed with his eyes closed, clutching his head. He denied any other symptoms and reported no personal or family history of severe headaches or migraines. The team physician suspected the player was experiencing a SAH as the sudden onset headache was the worst the player had ever experienced, a classic warning sign, so on advice of the team physician, prior to completing other assessments, the player was immediately sent to hospital by ambulance. The player arrived at the hospital emergency room in less than 30 minutes.
At the hospital, other than an elevated respiration rate of 26 breaths per minute, the patient was vitally stable. Temporary partial pain relief in the emergency room was achieved through bimanual compression of his head (temporal regions). Computerized tomography (CT) scan of his head showed a ruptured aneurysm off the lenticulostriate branches of the left middle cerebral artery leading to subarachnoid hemorrhage. (Figure 1.) 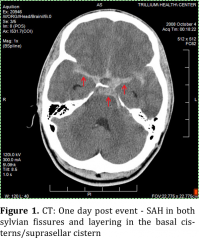 Figure 1. CT: One day post event - SAH in both sylvian fissures and layering in the basal cisterns/suprasellar cistern
×

Figure 1: CT: One day post event - SAH in both sylvian fissures and layering in the basal cisterns/suprasellar cistern 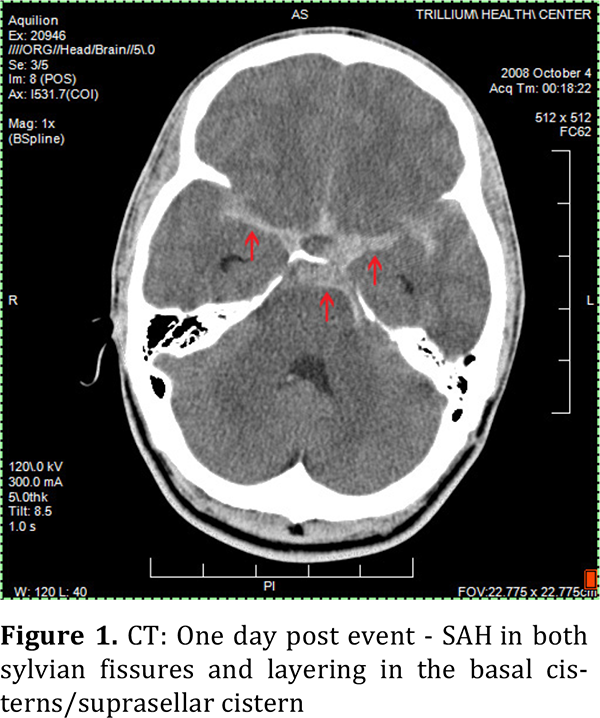 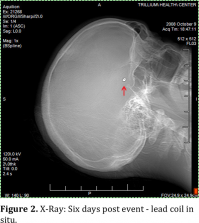 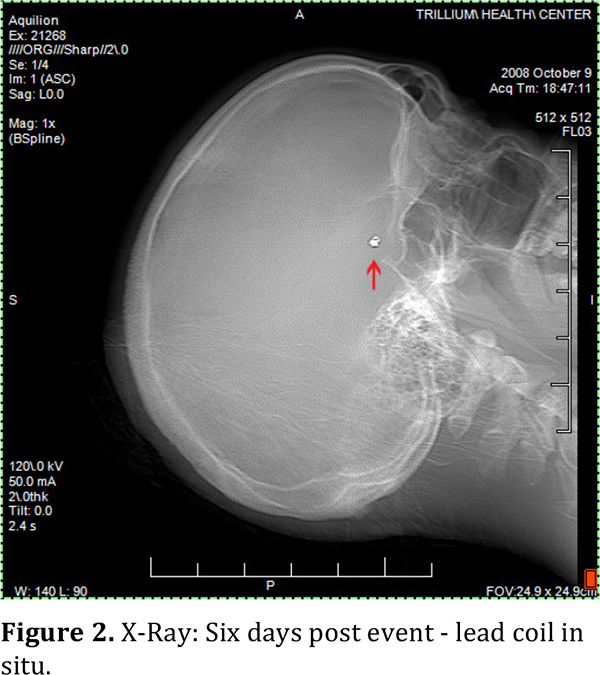 Early endovascular coiling (<72 hours) reduces rates of re-bleeding but is associated with higher rates of vasospasm and surgical morbidity (6). Post-procedure disorientation and temporary memory loss resulted, however, shortly after the procedure the patient’s primary symptom of headache resolved. Relative rest (sedentary) was prescribed. As there were no subsequent complications, the patient was discharged 10 days after admission.
Following a two-month period of rest, the player completed very gradual progressive training with his ice hockey team which included stationary cycling, followed by slowly progressive dry land training, and eventually on ice training. The return to play decision was based upon a discussion between the player, the team physician, the neurosurgeon, and the interventional radiologist. Prior to returning to hockey training the following clinical signs and measurements were evaluated and all were determined to be absent or unremarkable: headaches or other abnormal symptoms including dizziness, cognitive dysfunction, memory disturbance at rest, pressure headaches with exertion or exercise, neurologic testing (ImPACT), blood pressure (104/34 mmHg), heart rate (63 beats per minute, regular rhythm), pronator drift, pyramidal weakness, neck suppleness, extraocular movements, visual fields, cranial neural examination, motor and sensory examination. The player returned to a high level of cardiovascular activity with no symptoms of dizziness, cognitive dysfunction, memory disturbance, headache or any other neurologic dysfunction. Three months post-procedure a magnetic resonance angiogram (MRA) head was completed with no evidence of residual or recurrent aneurysm/SAH.
The patient continued to play junior, then professional hockey where he was evaluated, at a minimum, annually by medical professionals. In both leagues the patient continued to play the same hockey position and his activity level did not change. No special preventative measures were employed for the patient. At the time this report was written, he was eight years post-event, he had not experienced any complications including traumatic brain injury and his neurological examination remained unchanged.

Retrospectively, this case suggests that an uneventful return to contact sport was supported by a period of prolonged absence of symptoms including absence of headaches during rest and training and by the completion of a MRA revealing no impaction or migration of the coil/aneurysm. In this specific case, 2 months rest from exercise and contact was sufficient to return to ice hockey.
This case could guide future cases of spontaneous SAH in athletes and has implications for return to sport considerations in athletes’ post-stroke. Further research is required to establish best-practice guidelines in athletes with spontaneous SAH.