Objective: To investigate admissions to a sports medicine polyclinic in order to demonstrate the regional patient profile.
Materials and Methods: Data (n: 2474) pertaining to athletes/patients who were admitted to the sports medicine polyclinic were evaluated using their digital files. The “Daily Report on Injuries and Illnesses” form put out by the International Olympic Committee was used for the classification of illnesses and injuries.
Results: Among the participants, 70.2% were males; 95% of the applicants were athletes, with 74.1% of the participants being under the age of 18. Most of the applications (44.5%) were made during winter. About 63.0% of the participants applied for licensing examination, 35.9% due to injuries and illnesses, and 1.1% to receive medical support. While the most frequent reason for athletes’ application was license examination, sedentary individuals largely applied due to injuries (p<0.05). Injuries mostly affected the lower extremities, whereas disease symptoms mainly involved the cardiovascular system. Most injuries had occurred during training, and conservative methods tended to be used for treatment.
Conclusions: Licensing examinations should be carried out in primary health care facilities. Performance analysis should be performed through equipments used in the field of sports medicine. Conservative treatment units should be established. Lastly, it is crucial that sports medicine specialists increase their role in the fight against chronic diseases experienced by sedentary people.

Physical activity plays a major role in leading a healthy lifestyle, as people who spare time for sports gain significant health benefits (1). Regularly engaging in physical activity has an impact on reducing the risk, and preventing the development of many chronic diseases; including obesity, hypertension and diabetes. Numerous clinical and epidemiological studies report that these impacts display a dose-response relationship (2). In addition to preventing diseases, exercise also has psychological and social benefits. Moreover, exercise has been shown to provide economic benefits through cutting costs related to national healthcare, as the costs associated with illnesses experienced by physically inactive individuals are 30-50% higher (2).
The field of specialization in medicine that deals with the prevention and treatment of such injuries is sports medicine. Sports medicine specialists do not manage only the prevention of injuries and the process of rehabilitation after injuries, but they also carry out participation evaluations prior to sports, apply annual medical testing of athletes, make suggestions for the prevention of chronic diseases and/or the treatment of illnesses, may take charge in health committees of teams, brief on nutrition and anti-doping, and promote the value of exercise to improve health (3).
The identification of the type, localization, speed, and treatment need of sports injuries contributes to improving the quality of service offered by health service providers, and better enables the health needs of athletes and the society to be met accurately and quickly at the national level (2,4).
The expertise of sports medicine has to reflect on specific skills in order to perform effectively. In this branch, the duty area expands when the equipment infrastructure is sufficient. Identifying application reasons is necessary to anticipate needs in the region of concern. There are some studies conducted in different regions. However, epidemiological studies on sports medicine in Turkey are very scarce (5,6).
The aim of this study is to assess applications made over the course of a year to a sports medicine polyclinic located in a metropolitan city with a population of two millions.

Data pertaining to athletes and patients who applied to the sports medicine polyclinic between April 2017 and April 2018 were assessed on digital patient files by a sports medicine specialist. Information included sports branch, details of training, location of injury on body or impacted system, type and reason of injury or disease symptom, timing of injury (during training, competition, other), time elapsed between onset of injury or disease and presentation to the polyclinic, seriousness of injury, diagnosis and treatment processes.
All patients who were examined at the Medical Center for Athletes, and who agreed to participate in the study were included. The researcher has considered in the analyses new presentations to the sports medicine polyclinic for a check-up, and the new examination findings in relation.
The reasons for presentation to the polyclinic were categorized as: 1. License examination (physical examination for participation in sports and general medical examination), 2. Injury and illnesses, 3. Medical counseling (exercise and/or ergogenic support suggestions, anti-doping counseling, and exercise prescription in case of chronic diseases).
The Daily Report on Injuries and Illnesses form put out by the International Olympic Committee was used for the classification of illness and injury applications (7).
The local ethical committee approved the study in the meeting dated 6 June 2018 with resolution number 2018/74.
Statistical Analysis
Statistical analyses were carried out using the Number Cruncher Statistical System 2007 Statistical Software (Utah, USA). Descriptive statistics methods (average, standard deviation, frequency and frequency distributions), as well as Shapiro-Wilk normality test, and distribution of variables were used in the data analysis. For inter-group comparisons without presence of normal distribution, the Kruskal Wallis test was used. For subgroup comparisons, Dunn’s multiple comparison test was used; and finally, for group comparisons and qualitative data comparison, Mann-Whitney U test and chi-square test were used, respectively. The significance level for the analyses was set at p<0.05.

Compared with the sedentary, the athletes were younger and had lower body mass index (p<0.05), (Table 1).
The sport most engaged in by the participants was football & futsal with a rate of 20.3%. This was followed by combat sports (boxing, kick boxing, judo, karate, kung fu, mixed martial arts, muay tai, taekwondo, wushu, and other far east sports) with a rate of 19.2%. Then followed athletics (12.8%), basketball (9.4%), weight lifting (8.2%), swimming and water polo (5.9%), volleyball (4.2%), folk dancing (3.9%), aerobic exercises and fitness (2.9%), wrestling (1.6%), arm wrestling and body building (1.3%), field hockey and paralympics (1.1% each), handball, racket sports (tennis, table tennis, badminton) and other branches (orienteering, shooting, darts, chess) (0.8% each), artistic gymnastics and cycling (0.4% each). The rate for non-athletes was 4.9%. The weekly training duration of the athletes was 8.1±6.4 hours, while their annual training duration was 9.4±4.0 months.
The presentations of athletes to the clinic in winter were statistically higher than those made by sedentary (p<0.05). Considering seasonal changes, presentations to the clinics for license examination were mostly done in winter. The number of presentations to the clinic for injuries and diseases in winter was statistically lower than the other seasons (p=0.001). The injured part of the body or impacted system, type of injury or symptom of disease, reason of injury or disease, seriousness of injury, and need for treatment did not display any seasonal differences (p˃0.05). The duration of time between presenting to the polyclinic and the onset of injury or disease in winter and autumn was found to be lower than that in summer and spring (p=0.005, p=0.001; p=0.012, p=0.005).
Regarding the reasons for presentation to the polyclinic, 63.0% of the participants came for license examination, 35.9% due to injuries and illnesses, 1.1% to receive medical support. No difference was detected between presentation reasons in terms of gender (p>0.05). While the most frequent reason for athletes who presented to the polyclinic was to undergo physical examination for participation in sports, the most common reason for which sedentary presented was injury (p<0.05).
Regarding the injuries of the athletes, 11.0% (n=86) had them in the head and trunk, 18.2% (n=142) in the upper extremities, and 63.0% (n=491) in the lower extremities. There was a difference between the athlete and sedentary groups in terms of injury incidence in the upper extremities only (p=0.013), (Table 2). There was no difference in the injuries in terms of gender (p>0.05); and there was no difference in the distribution of injury region according to participation experience in sports (p>0.05). 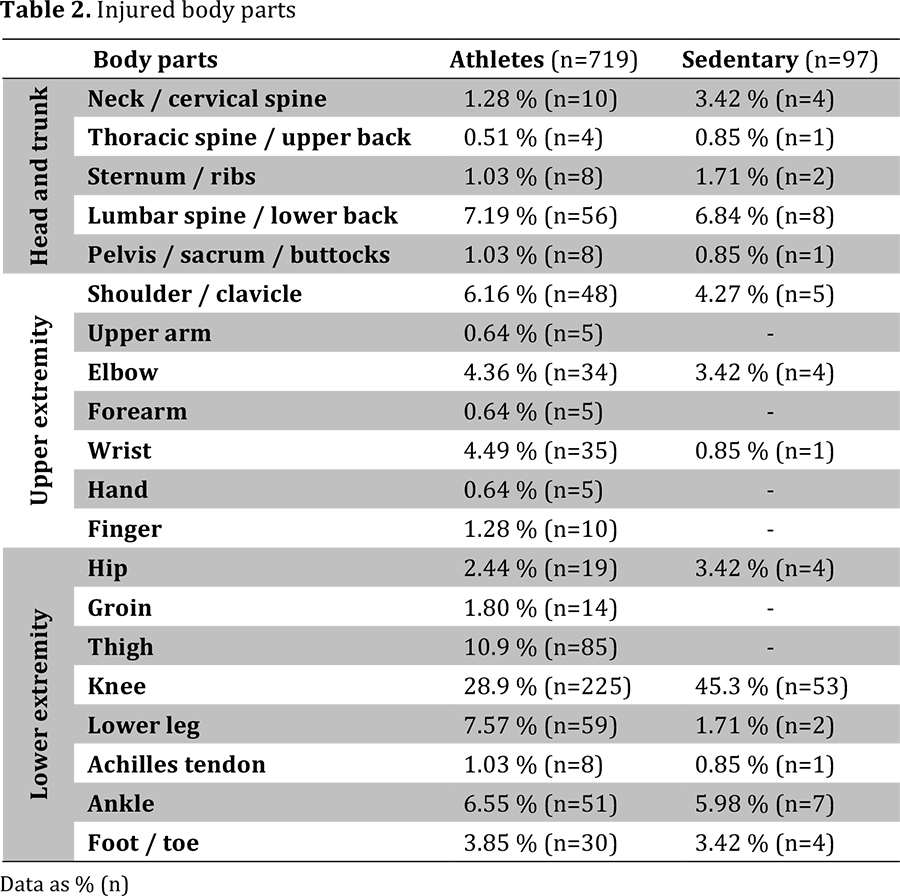 In terms of the most injured regions, statistically significant differences were seen in injuries suffered in the lower extremities while participants were engaged in athletics and football-futsal (each p=0.001), and in the upper extremities while participants were engaged in weight lifting (p=0.001), volleyball (p=0.01), arm wrestling and body building (p=0.001), and artistic gymnastics (p=0.002) (p<0.05), (Table 3). In presentations related to disease symptoms, the most affected area was the cardiovascular system in the athletes. Complaints made by the sedentary who presented to the clinic with disease symptoms differed from those of the athletes in that they largely involved the metabolic or endocrine systems (p=0.001), and the musculoskeletal system (p=0.001). 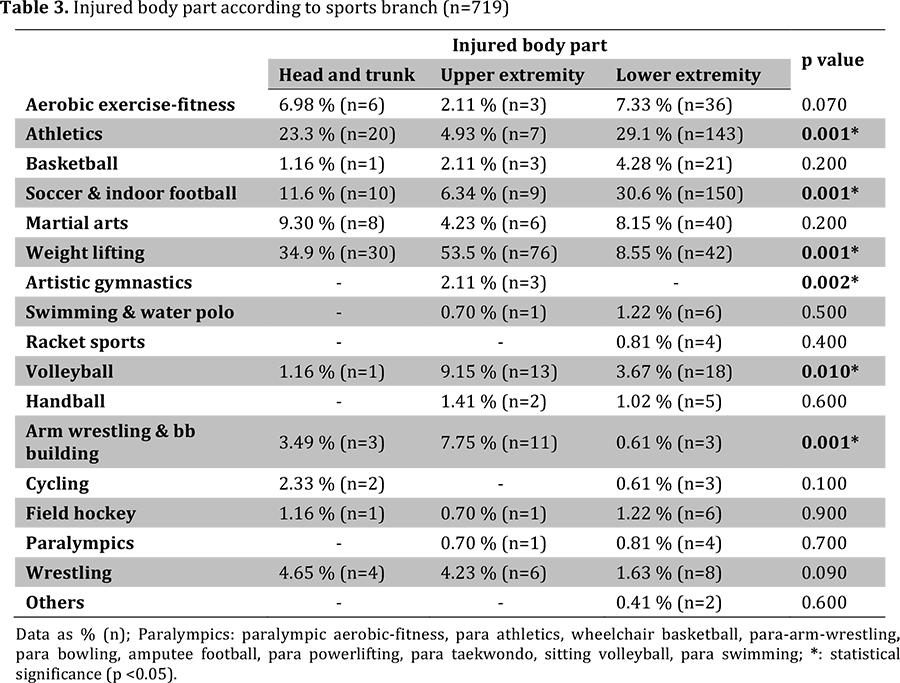 In assessing injury and disease presentation rates of the athletes who played football-futsal, it was found that their presentations due to injury were higher than those due to disease (p=0.003). Recreational athletes who participated in aerobic exercises or fitness, and athletes who participated in combat sports presented more to the polyclinic due to disease (p=0.007, p=0.007). There was no difference in presentations due to injury and disease in the other sports branches (p>0.05).
The injury types of the patients and their main symptoms, outside of those patients who were determined to be healthy, are shown in Table 4. The most frequent and classifiable injury type in the athletes was strain, and the most frequent symptom was palpitation. The sedentary mostly had meniscus or cartilage lesions as classifiable injuries, and pain and dyspnea or cough as symptoms of diseases. 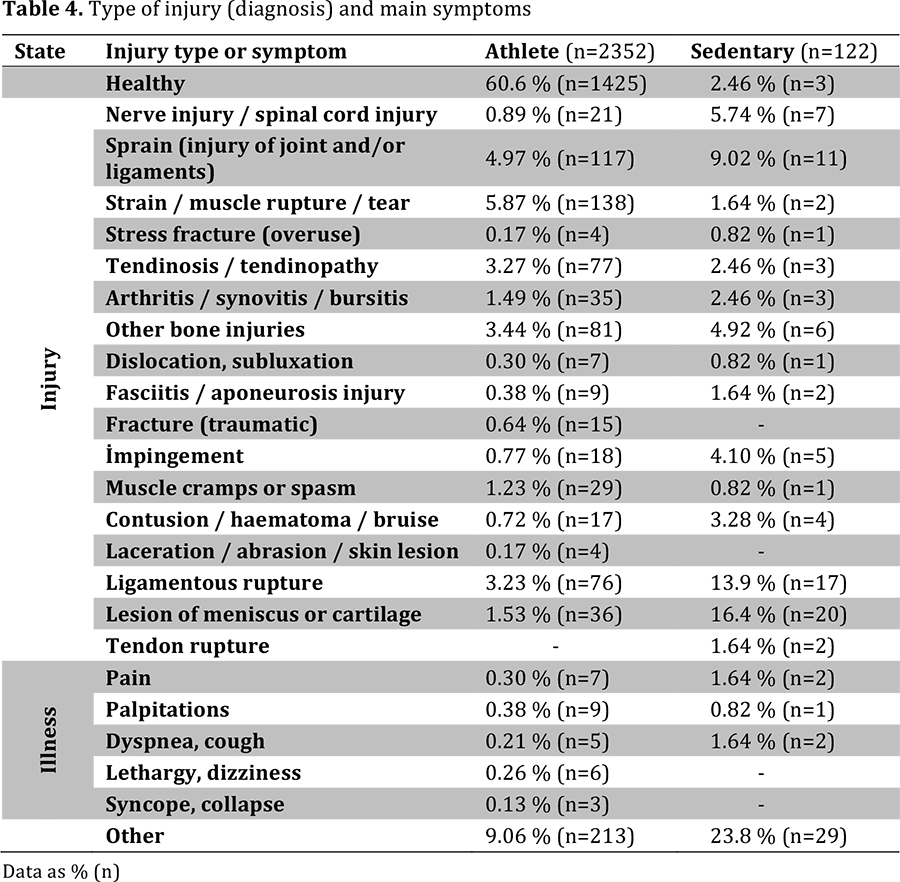 In the examination in terms of injuries, both athletes and sedentary were found to have mostly overuse related minor injuries. The main cause of diseases was exercise-induced in athletes, and recurrence of an existing disease in sedentary. Injuries or diseases occurred in 60.2% (n=465) of cases involving athletes during training; and in 25.0% (n=193) of cases involving athletes during competition.
There was a difference between the injury fields of athletes and sedentary (p<0.05). A difference arose between the groups regarding frequency; since the athletes presented to the clinic in 36.5±55.8 days on average, while the sedentary presented in 90.9±8.0 days (p=0.001). Moderate and severe injury rates in the sedentary group were significantly statistically higher than those in the athlete group (p<0.05). While the loss period associated with the injuries suffered in athletics and weight lifting was low, the loss period associated with the injuries suffered in basketball and football-futsal was higher (p<0.05).
Following examination, conservative treatment methods were planned first for 96.2% (n=742) of the athletes and 94.4% (n=102) of the sedentary. Surgical treatment was offered to 3.8% (n=29) of the athletes and to 5.6% (n=6) of the sedentary. There was no difference in treatment needs between athlete and sedentary groups (p=0.372). However, regarding gender differences, while 99.0% of the females (n=204) preferred conservative treatment, 95.2% of the males (n=538) preferred conservative treatment (p=0.014).

Regionally, license examinations should be completed in primary health care facilities. Performance analysis should be performed by providing the equipments used in the field of sports medicine. Conservative treatment units should be established. Finally, sports medicine specialists should increase their part in the fight against chronic diseases in sedentary individuals.