Objective: The aim of the study is to determine hamstring/quadriceps (H/Q) strength ratio, peak torque (PT), and postural balance (PB) in dominant (D) and non-dominant (ND) legs in Turkish female volleyball players.
Methods: This cross-sectional study included 63 Turkish Women’s Volleyball 1st league players with a mean age of 21.9±4.4 yr, mean height of 182.0±5.9 cm and mean body weight of 66.5±8.3 kg. Dynamic balance measurements were performed for 20 seconds and three repetitions for each leg. Overall stability index (OSI), anterior/posterior stability index (APSI) and medial/lateral stability index (MLSI) data were collected. Afterwards, hamstrings and quadriceps PT was measured with an isokinetic dynamomoter for concentric/concentric (con/con) contractions at both speeds of 60˚/s and 180˚/s. Wilcoxon Test was used for statistical analysis.
Results: Statistically significant difference was found for quadriceps muscles’ PT between dominant or non-dominant legs at 60˚/s. H/Q ratios were found lower in the dominant leg, with statistical significance at 60˚/s. No statistically significant difference was found for OSI, APSI and MLSI between dominant and non-dominant legs.
Discussion: H/Q ratios increase with higher angular velocity. Also, there are statistically significant differences in PT and H/Q ratio at 60˚/s between dominant and non-dominant legs. These findings may indicate that the non-injured leg can not be used as a reference for the injured leg in case of injury in female volleyball players, regardless of which leg is involved.

Volleyball is a sport that is played in a relatively small area. Volleyball players perform numerous jumps and spikes during matches and trainings that require adequate control of shoulder, lower back and leg muscles, and they use powerful and explosive force during these movements. When performing these tasks, they jump and land vertically. During these tasks, as balance is acutely disturbed, the players must react quickly in order to maintain balance. Postural control is very important for the players during volleyball actions.
Injuries are often seen in volleyball. Muscle strength imbalance is one of the main causes of sports injuries (1). Muscular function is very important in athletes for injury prevention and monitoring the rehabilitation. Hamstring and quadriceps muscles have key roles in many of physical activities such as running and hopping.
The difference of muscle strength between dominant (D) and non-dominant (ND) legs, agonist/antagonist muscle strength ratio and lower limb stability are all important for preventing injuries, especially in the knee joint. The ratio of maximal isokinetic hamstring muscle strength to maximal isokinetic quadriceps muscle strength (H/Q ratio), is a commonly used parameter to describe muscle strength properties around the knee joint (2). Concentric hamstring/quadriceps (Hcon/Qcon) strength ratio is the most commonly reported ratio for the knee joint. While Hcon/Qcon ratio is the conventional ratio, the Hecc/Qcon is considered as the functional ratio.
Sufficient quadriceps and hamstring strength is required for sports performance. These two muscles are functional antagonists. Both muscle groups should have adequate strength for running, jumping, hopping, landing and other sporting activities (1). Muscle strength can be appropriately measured with an isokinetic dynamometer (3). The isokinetic strength test can be performed in order to determine concentric or eccentric muscle strength at constant angular velocities.
Vertical jumping is one of the basic movements in volleyball. Therefore, jumping higher is one of the training aims. Strength training is used to achieve this goal (4). There are two basic functions of the extensor mechanism that underline jumping skills: concentric contraction during the acceleration phase of jumping, and eccentric contraction during the landing phase. Due to such loading on the extensor mechanism, there may be an imbalance between the extensor and flexor muscles, which causes overloading of the tendon structures around the knee joint (5).
In many movements in volleyball, the quality of postural control is also essential. Serving, passing reception, or defensive actions are influenced by the athlete’s ability of dynamic balance control. Volleyball players must adapt their positions very quickly to react to the positions in the game (6). In this respect, it is important to determine the balance ability of volleyball players and to investigate the factors affecting it (7). The single leg balance test has been widely used for stabilometric assessment in similar studies.
Following injury, the healthy leg is generally accepted as a reference for the assessment of the injured leg, but the relationship of strength, H/Q ratio and balance between D and ND legs in volleyball players is not known . The objective of this study is to determine 1) Hamstring and quadriceps muscles’ peak torque scores for D and ND legs, 2) conventional Hcon/Qcon muscle strength ratios, 3) balance ability in D and ND legs for Turkish professional female volleyball players. The aim of the study is thus to determine H/Q strength ratio, PT and PB in D and ND legs in female Turkish volleyball players.

The study has been approved by the local Research Ethics Committee with the protocol number of 14-892-17. Sixty-three healthy Women Volleyball First League players who train for 15 hours weekly, and who have a mean age of 21.9 years (between 17-25), mean height of 182.0 cm (between 170-192) and mean body weight of 66.5 kg (between 50-92) were included in the study. Each participant was informed about the study and written consent was taken through an Informed Consent Form. The procedures were in accordance with institutional and national ethical standards for human rights and the Helsinki Declaration was respected. All participants had performed the isokinetic strength test at least once and none of the participants had any history of knee or ankle surgery. The leg that the player uses for hitting the ball was considered as the D leg.
One of the author tested the participants, while at least another author was observing. The initial test was balance measurement and it consisted of three trials (each lasting 20 s), and was performed for both legs. Between trials, athletes were allowed to rest for 10 seconds. Balance measurements were performed with a balance device (Biodex Balance Systems SD, Biodex Medical Systems, Shirley NY, 11967, USA). Balance measurements include anterior/ posterior stability index (APSI), medial/lateral stability index (MLSI), and overall stability index (OSI) scores. These indices indicate standard deviations from the center of the platform. The OSI score is calculated by combining APSI and MLSI scores. All three indices were automatically calibrated by a computer software. A high index score indicates poor balance. The OSI balance score is thought to be the best indicator of the patient's ability to hold the platform in place (8). The foot position of the athletes remained constant throughout the measurement.
Following balance measurements, the athletes performed warm up with a cycling ergometer (Monark, Sweden) at 50 W for 5 minutes. Thigh strength measurements were performed with the Biodex Isokinetic Systems Pro device. After warm-up, peak torque (PT) of hamstring (H) and quadriceps (Q) muscles, and conventional H/Q ratios were measured by an isokinetic dynamometer at 60˚/s (five repetitions) and 180˚/s (10 repetitions) angular velocities. Between measurements, athletes were allowed to rest for 3 min. For isokinetic measurements of both legs, the subjects sat on the dynamometer’s adjusted seat, and their low back, thigh and upper extremities were fixed. Measurements were performed on the same day for both D and ND legs.
Non-parametric Wilcoxon test was used as the data were not normally distributed. All variables are reported as mean ± standard deviations. 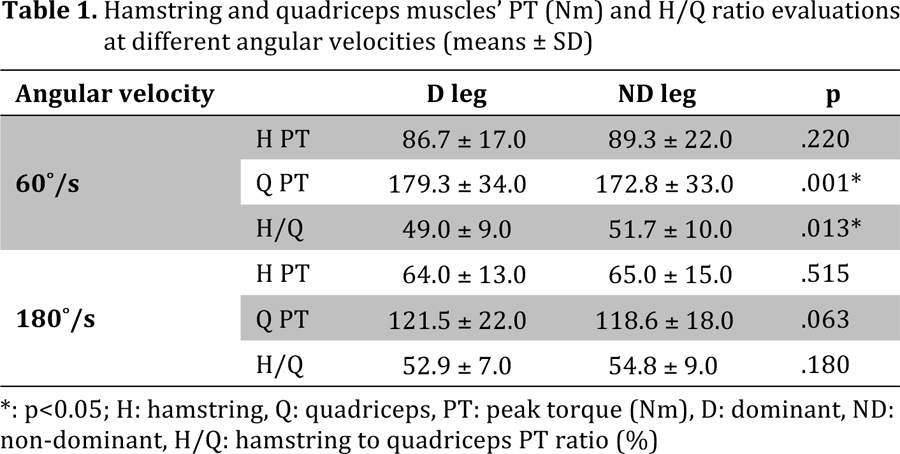 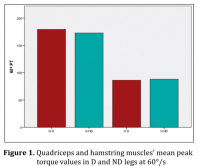 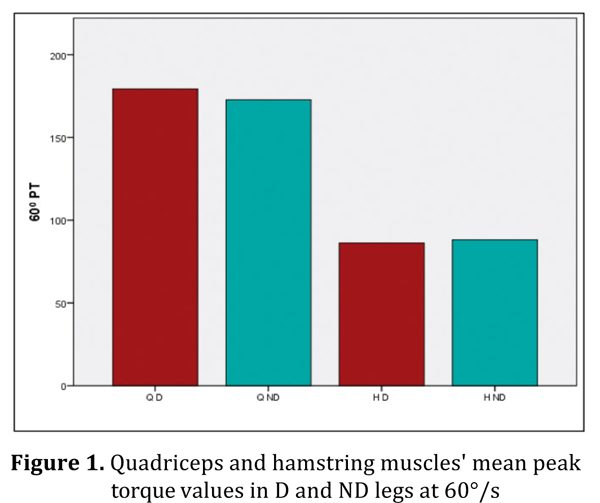 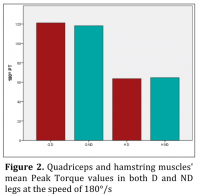 Figure 2. Quadriceps and hamstring muscles' mean Peak Torque values in both D and ND legs at the speed of 180°/s
×

Figure 2: Quadriceps and hamstring muscles' mean Peak Torque values in both D and ND legs at the speed of 180°/s 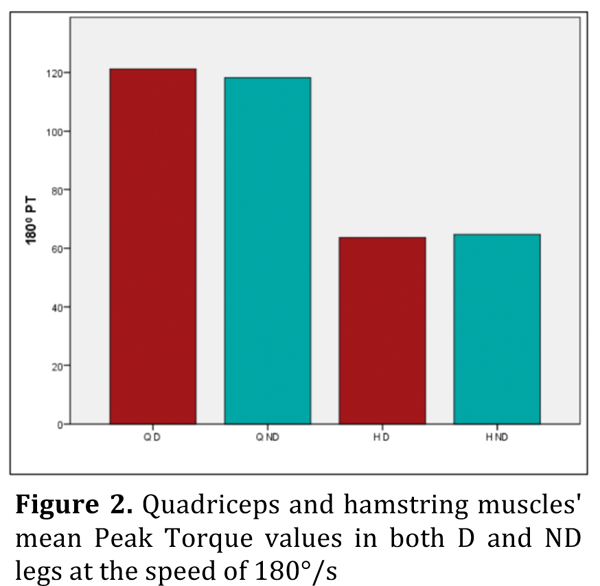 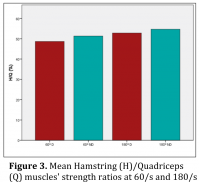 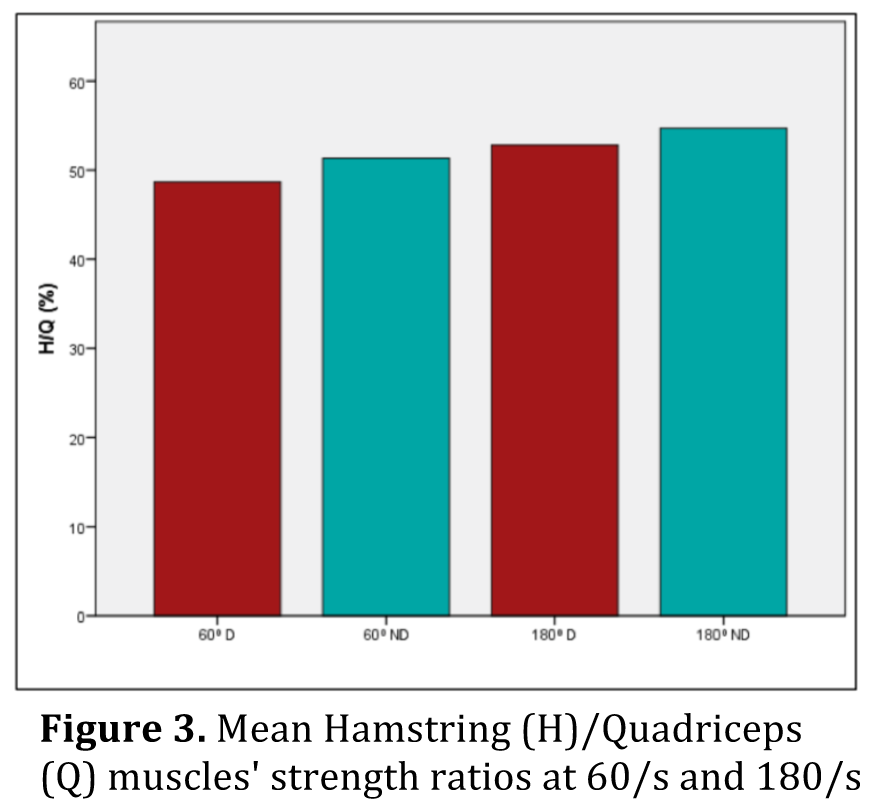 In our study, there was no significant difference between the D and ND legs in terms of balance in female volleyballs, and that the other leg can be taken as a reference in case of injury regardless of which leg is injured. There is significant differences in the strength and H/Q ratio for the D and ND legs at 60°/s angular velocity; so both leg can not be used as reference for each other during rehabilitation in female volleyball players at 60°/s angular velocity. The results obtained in our study may be used as a reference by clinicians and coaches.