Objective: Physical function diminishes with age because of physical, psychological and environmental factors. This study aims to compare the physical performance, physical activity and life quality of elderly people who live in rural and urban areas of Turkey.
Materials and Methods: In total, 174 participants were included in the study, 88 living in urban areas and 86 living in rural areas. Socio-demographic characteristics of the participants were recorded. Daily metabolic equivalent (MET) scores were calculated for physical activity levels. Time performance tests and the Nottingham Health Profile inventory were also used. Rural and urban residents’ data were compared.
Results: According to their daily MET values, physical activity levels of elderly people living in rural and urban areas were similar (p>0.05). Elderly men living in rural areas were more successful in the performance test of changing from the supine to sitting position, whereas elderly women living in urban areas were more successful in the stairs climbing performance test (p<0.05). The difference between the groups’ quality of life scores was not significant (p>0.05).
Conclusions: Living environment does not create a difference in terms of physical condition and health-related life quality of elderly people in Turkey, for the population in question.

The number of elderly population has increased continuously, both globally and in our country. The proportion of seniors aged 65 and over is 8.2% in Turkey (1). Aging brings negative morphological, physiological and pathological changes. These changes decrease physical and mental abilities. Physical function that is the most important determinant of individuals’ dependency levels decreases with age. Loss of physical function is one of the main problems that arise from aging (2). Physical performance measurements make it possible to detect functional loss.
Physical activity is important for the elderly, as well as for any age group. Since physical inactivity is one of the most important modifiable causes of chronic diseases such as coronary heart disease, high blood pressure, stroke, type 2 diabetes, colon cancer and breast cancer. Older adults who are physically active display better functional health, a lower risk of falling, and higher levels of cognitive function. This situation reduces daily life activity limitation risk (3,4). Physical activity level, physical function and health related quality of life are interrelated (4).
Urbanization impacts physical activity and has both negative and positive effects on physical activity, while increased vehicle traffic and building spaces affect it negatively. Employment, education, transportation facilities are considered as effecting positively (5). In Turkey, the majority of the elderly population lives in rural areas. Life styles in rural and urban areas are quite different socioculturally and economically in Turkey: rural areas have an agricultural economic and social structure, and transportation is more developed in urban areas than in rural areas. Generally, there are multi-storey apartment buildings in urban areas, while rural areas consist mostly of one-storey houses (6). These factors imply that functional levels may differ according to place of residence.
There are limited research in the literature that have used performance measurements to determine physical function in elder people living in different environments (7,8). Studies in different parts of the world have shown that location affects the level of physical activity and quality of life (3,5,9,10). There is a limited amount of research on quality of life and level of physical activity in rural and urban areas in Turkey (11-13). According to our survey, there is no study examining the relationship between place of residence and physical performance in Turkey.
The present research aims to compare physical performance, physical activity and quality of life of elderly living in rural and urban areas in Turkey. The hypothesis is that older people living in rural areas in our country would have better physical activity level, physical performance and quality of life.

The population of the study consists of elderly people living in Izmir, Gaziemir, and the nearest three villages. Data were collected from 334 elderly participants between February and September, in 2009. Rural and urban areas have been defined according to local government laws. Accordingly, 164 of these participants were living in rural areas, and 170 were living in urban areas. The required sample size was calculated by using the inter-groups correlation coefficient table. It was determined that at least 86 people had to be included in the evaluation from each group at p<0.05 significance level and at 80% power, according to the power tables. The participants were selected from the Gaziemir central district, and the villages of Küner, Develi and Tekeli by using stratified sampling and a simple random numbers table. The sample was randomly selected from records obtained from local authorities.
The inclusion criteria were being 65 or older, independent living alone or with family, to reside in the rural or urban area permanently for at least 12 month; not having serious systematic diseases, and hearing or sight loss; to have a score of 24 and higher in the mini mental status test, a score of 45 and higher in the Berg balance test, and a score of 12 and lower on the geriatric depression scale. A total of 79 people from rural areas and 83 people from urban areas were excluded from the study, for not complying with the inclusion criteria.
The Ethics Committee of University Clinic and Laboratory Research approval was obtained for this study. The research was carried out in accordance with the "Helsinki Declaration". All participants had given their informed consent for participation in the research study. Preliminary information about the participants’ age, gender, height, weight, marital status, work status, public insurance and life style was obtained and recorded on the evaluation form. The dependent variables of this study were physical function, physical activity level and quality of life. The independent variable was place of residence.
Performance Measurements
Timed performance tests were conducted to measure the physical performance of participants. This is a very objective evaluation method. Tests were used to evaluate physical function of the elderly, by qualifying their daily living activities. During performance measurements, participants were asked to perform the determined activities as quickly as possible, and the performance time was recorded with a chronometer, in seconds. Tests were shown and taught to each participant, and each measurement was repeated three times. The best time was recorded. Participants rested for 1 min between each measurement (14).
Rolling time: While lying in a supine position on a mat, the participants were asked to roll to one side and return to starting position as quickly as possible. Then the participant repeated the same performance on the opposite side. The total rolling time was obtained by adding both sides scores (14,15).
Lie/sit test: Starting from the supine position, participants were asked to move to a sitting position by swinging their feet (14,15).
Sit to stand: The test starts from a seated position. Participants performed five consecutive sit and stand movements from a chair, as rapidly as they could. Total time was recorded (14,15).
Fifty-foot walking test (50 FW): The participants walked as fast as possible for 25 feet, turned, and walked back to the starting point. Total duration of performance was recorded (14,15).
Climbing stairs test: The participants were asked to climb four steps, each of approximately 18 cm high, and to descend without waiting (14,15).
Physical Activity Evaluation
We used the Compendium of Physical Activities (CPA) scale to determine participants’ physical activity levels. CPA scale is a questionnaire, which is based on the intensity of some specific activities. It can be expressed in metabolic equivalents (METs) to estimate energy expenditure of specific activities. Multiplying the MET value of the activity by body weight gives estimated energy expenditure (16). The scale categorizes all activities of individuals on a daily time frame. The CPA scale was constructed for the participant to complete the duration in minutes (15, 30, or 45 min) and hours (1-10 h) spent at each MET activity level on an average 24 h weekday. The CPA scale has nine levels of physical activity, namely 0.9 to 6 METs. For each level, the MET value is multiplied by the time spent on that particular physical activity level. The sum of the MET-time scores obtained from all levels yields a score that gives the level of daily physical activity within an average weekday.
Quality of Life Assessment
For the measurement of quality of life, the “Nottingham Health Profile” inventory was used. Its reliability and validity for the Turkish version was assessed by Küçükdeveci et al. (17), to evaluate quality of life in the elderly. This scale includes 38 questions in six categories (sleep, energy level, emotional status, social isolation, physical mobility and pain). The questions are yes/no questions, and the score is calculated according to the answers. Higher scores indicate low quality of life, and lower scores indicate high quality of life).
The data were evaluated by using the SPSS 15.0 statistics program. Percentage distributions, arithmetic means and standard deviations were used to evaluate demographic characteristics. The chi-square test was used for categorical data analysis, and the independent sample t-test was used in numerical data analysis. The significance threshold was defined as p<0.05 (18).

Participants’ sociodemographic characteristics are given in Table 1. The mean age of the cases for those living in rural areas is 71.8±5.8 and for those living in urban areas is 71.6±5.5. Age, BMI and marital status distributions for both groups were homogeneous (p>0.05). However; gender, working status and public insurance were statistically and significantly different (p <0.05). The number of females and the people with public insurance was higher in urban areas than in rural areas in this study, therefore data were analyzed by separating the genders.

Table 1. Sociodemographic characteristics of the participants
×

Different performance measures reveal different results. Elderly men from rural areas changed position from supine to sitting in shorter time than men from urban areas. On the other hand, elderly women living in urban areas climbed and descended stairs more quickly than elderly women living in rural areas. These differences were statistically significant (p<0.05), (Table 2). There was no significant difference in other performance measurements (p<0.05). Physical activity levels of both male and female participants were higher in rural residents than city dwellers. But this difference was not statistically significant (p<0.05), (Table 2). 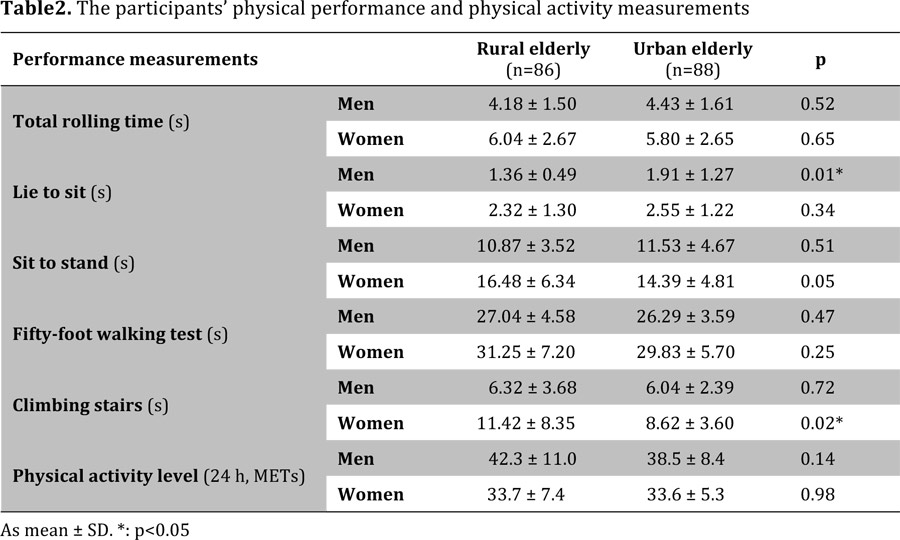 Table 3. Comparison of the participants’ quality of life
× 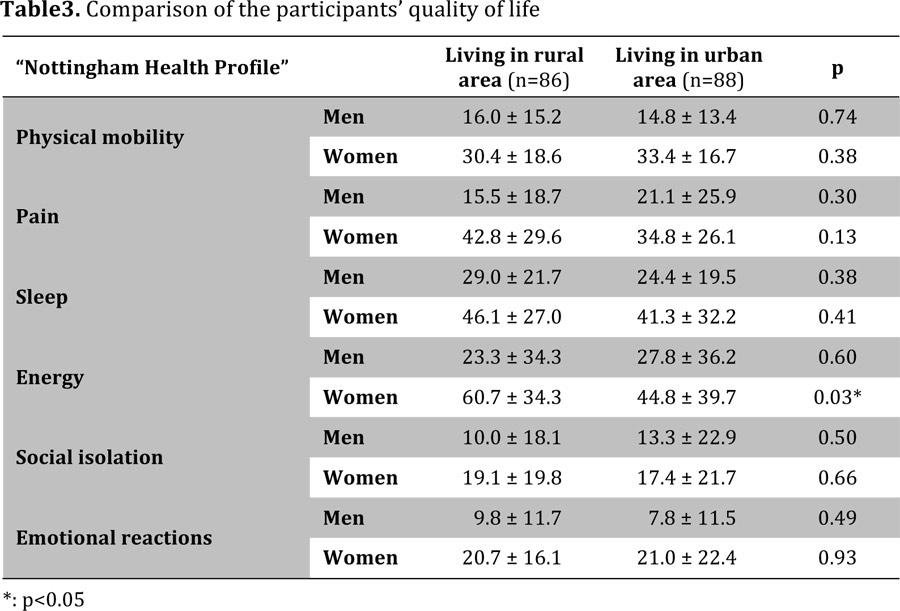 In our study, physical function, physical activity level and quality of life except some subgroups were identified to be not affected by place of residence for elderly. In other words, in terms of both physical and emotional conditions, either living in rural or urban areas was not found to be advantageous for the elderly. Our foresight should be supported by cohort studies.

In this study there is no conflict of interest. No sources of funding were used.