Objective: The purpose of this study was to investigate the relationship between absolute isokinetic knee flexion and extension strength, and sprint and agility performance in collegiate male American Football players.

Materials and Methods: Twenty-six collegiate male players aged 19-27 years with at least a year of experience in playing American Football participated in the study. The players were tested for absolute isokinetic knee flexion and extension peak torque, sprint, and agility performance over two different days with at least 72-hour rest interval between tests. Knee flexion and extension peak torque were measured by means of an isokinetic dynamometer (HUMAC NORM, USA) at angular velocities of 60°·s-1, 150°·s-1, and 300°·s-1 for both knees. Sprint performance was evaluated with 40-yard dash and agility was evaluated with pro-agility tests, respectively.

Results: The study demonstrated that 40-yard dash and pro-agility test results did not correlate with any measures of isokinetic knee flexion and extension peak torque (p>0.05).

Conclusion: The results of this study indicate that isokinetic knee flexion and extension peak torque are not good predictors of sprint and agility performance in male collegiate American Football players. Additional research that will also evaluate relative (Nm.kg-1) isokinetic strength may be required to elucidate whether a correlation between isokinetic strength, and sprint and agility performance or perhaps other measures of performance exist for American Football players.

The popularity of American Football (AF) is growing in many countries including countries such as Turkey, Northern Cyprus, Finland, Japan, Brazil, and the United States (1,2). AF is charac-terized athletically by rapid acceleration, high running speeds, jumping ability, explosive muscle force, speed endurance, a high demand for strength endurance, a powerful throw, and de-celeration after performing complex skills such as cutting, catching the ball or passing. Despite of the high collision and injury rates, popularity and excitement of AF might be attributed to these characteristics of the sport (1,3,4).

The physical demands of AF include strength, speed, power, agility, flexibility, and aerobic and anaerobic endurance (3). According to McGee and Burkett; power, speed, and agility are valid predictors of draft status in professional AF players (5). Furthermore, muscular strength and speed are generally accepted to be major factors influencing AF player performance (6). It has been reported that greater strength is associated with enhanced force-time characteristics (e.g. rate of force development and capability of pro-ducing external mechanical power), general ath-letic performance (jumping, sprinting and change of direction) and sport-specific skill per-formance, and decreased injury rates (7). Meas-urement of muscle strength is an important fac-tor in the evaluation and prediction of muscular condition in addition to functional capacity (8), which includes strength testing protocols utiliz-ing dynamic, isometric or isokinetic methods (9). Isokinetic peak torque assessment is one of the most commonly applied methods of evaluating muscular condition in addition to functional capacity (8), isokinetic dynamometry generally being accepted as the gold standard for the as-sessment of isokinetic strength (10).

However, İnal, Erbuğ and Kotzamanidis reported that the average isokinetic peak torque of the right dorsiflexors of female sprinters at 120°·s-1 was related to 100-m sprint times (17). A sys-tematic review also reported that isokinetic strength testing has a strong potential to predict dynamic capabilities (e.g. 1 repetition max (RM) squat, bench press, sprint time, vertical jump and standing broad jump) in activities involving strength and explosive power (9). Given these conflicting results pertaining to the relationship between isokinetic strength and functional sport testing, the purpose of this study was to investi-gate the relationships between isokinetic leg strength and sprint and agility performance in collegiate AF players.

Twenty-six collegiate AF players aged 19-27 years;  from the Eastern Mediterranean University playing for the university’s AF team participated in the study on a voluntary basis, and signed an informed consent form on the first session of the study. After the announcement, 34 AF players approached the researchers to participate. However, eight players were excluded due to their AF experience being less than a year. The number of players required for this study was based on the study of Tsiokanos et al. to ensure sufficient statistical power (18). Therefore, a simple size of 20 players was necessary to achieve 80% power (effect size=0.55, α=0.05, power=0.80). Ethical approval for this study was obtained from the Ethics Review Committee of Eastern Mediterranean University (Approval code: 2019/14-04). Limb dominance was defined as the leg that is preferred when kicking a ball (8). All of the players were right-leg dominant.

Inclusion criteria was determined as follows: a) to be >18 years old; b) to have a minimum AF experience of >1 year; c) to be actively playing collegiate football in a University’s AF team; and d) not to have a history of musculoskeletal, neurologic, or cardiorespiratory complaints in the past six months. The players were instructed not to consume performance-enhancing substances (e.g. creatine, ribose etc.) and coffee was limited to one cup prior to testing. The players were also told not to engage in high-intensity physical activity 24 hours prior to the tests. The study consisted of two different testing days with at least a 72-hour interval.

On the first session, subjects were informed about the study protocol, descriptive and physical characteristics were collected in addition to performing the 40-yard dash and pro-agility field tests. On the second session, subjects performed an isokinetic knee flexion/extension peak torque test at the three different angular velocities of 60°·s-1, 150°·s-1 and 300°·s-1.

40-yard dash test (36.6 m): Subjects performed a 10-min running warm-up before the sprint test. Even though running pace was determined by the subjects during this warm-up run, they were instructed to run with minimal or jogging speed. Before the actual test, each subject performed two submaximal sprints as part of the warm-up. Three minutes’ rest was given between the warm-up and actual test attempts. Each subject ran two maximal 40 yard dashes within a 3 min rest interval. The best sprint time was recorded for evaluation.

Pro-agility test (18.3 m): Before the maximal tests, subjects attempted two submaximal runs. Subjects first ran 5 yds to the right, followed by 10 yard to the left, for a total of 20 yard (Figure 1). After 3 min rest, each subject ran three maximal pro-agility runs within a 3 min time interval from a three-point starting position. The best shuttle run time was recorded for evaluation. Directions were reversed for the second trial. Subjects decided the initial direction before the third attempt (26). During the test, subjects were warned to touch the lines with their hands. In cases where the subjects did not touch the line, the attempt was cancelled (27). 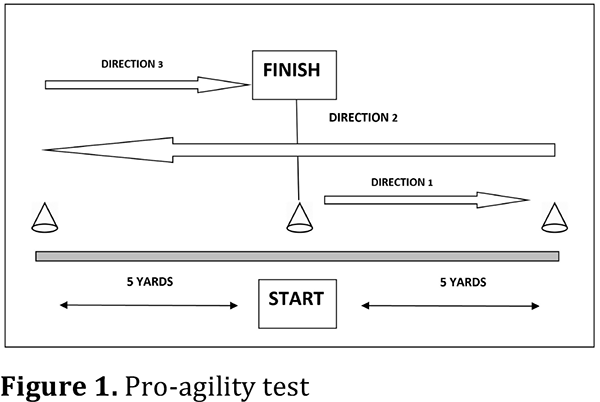 Sprint and shuttle run tests were measured with an infra-red gate timing device (Newtest 300 Series Power Timers, Oy, Finland). Both the 40-yard dash and pro-agility tests were carried out on a synthetic track at the university’s track & field facility. The order of the tests was randomized, where some players started with the pro-agility test, whereas others started with the 40-yard dash.

Isokinetic testing: After a warm-up consisting of 10 min running on a motor-driven treadmill at self-selected speed (max speed limit: 6.0 km/h), subjects were properly positioned in the isokinetic dynamometer (HUMAC NORM Isokinetic Extremity System, MA, USA). They performed a set of five consecutive extension-flexion contractions in the concentric-concentric mode at 60°·s-1, 150°·s-1 and 300°·s-1. They also performed two sub-maximal trials before performing a set of five maximal efforts at each angular velocity. Testing of dominant and non-dominant legs was separated with a 3 min resting period. A 2 min rest separated the measurements at different velocities. Subjects were tested from low to high angular velocity. Tests began with the dominant leg (right) and were completed with the non-dominant (left). They were asked to perform maximal voluntary contractions bilaterally. To ensure maximal effort and contraction, subjects were verbally encouraged throughout the testing. The highest peak torque (Nm) obtained from each test was selected for statistical analysis. 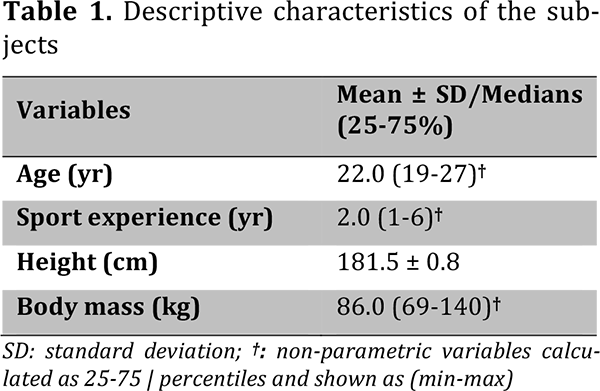 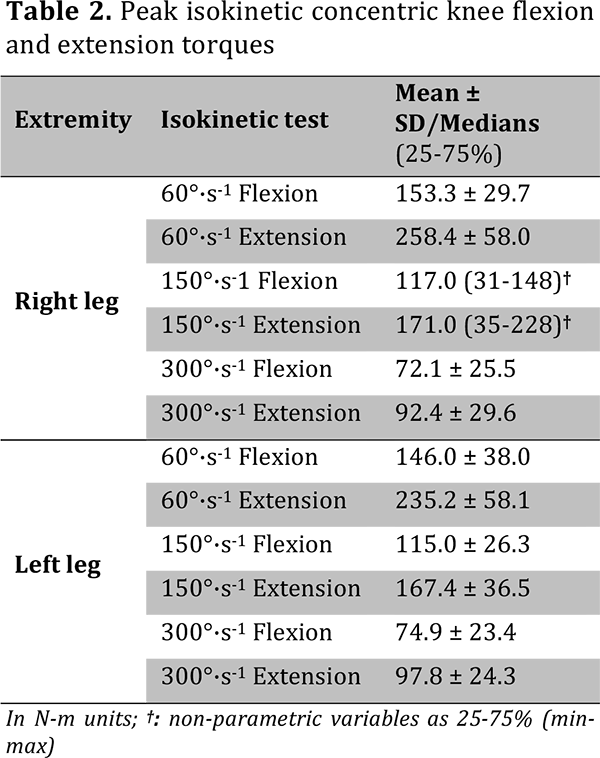 Table 3. Results of the 40-yard dash and pro-agility tests
× 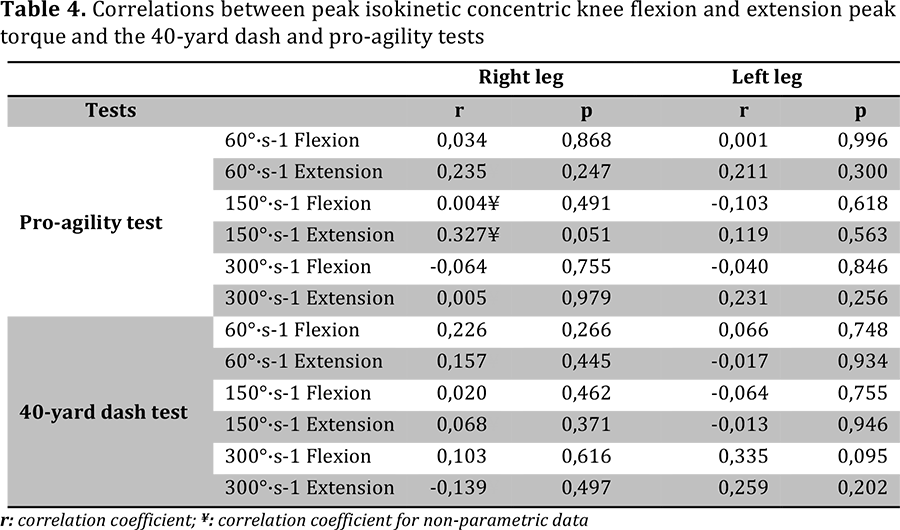 González-Ravé et al. (15) reported no relationship between isokinetic knee flexion and extension peak torques and vertical jumping performance in elite handball players. The authors explained the results such that vertical jumping is a closed chain, multi-joint task involving a stretch-shortening cycle type motion and that its neuro-muscular coordination aspect of affects skill significantly, whereas isokinetic testing is an open kinetic chain test at a constant angular velocity dictated by the machine. Newman et al. (6) reported that there were no relationships between isokinetic knee flexion and extension peak torques and anaerobic performance when evaluated by repeated sprint tests (12x20 m, with a 20 s resting interval). The phosphate system (ATP-CP) is the dominant energy system in isokinetic testing, whereas the dominant energy system in repeated sprint testing is the glycolytic energy system (lactic anaerobic system) accompanying the ATP-CP system.

When examining the results of this study, it should be noted that there is no inconsistency in terms of movement patterns between the tests; isokinetic testing, 40-yard dash, and pro-agility are all open kinetic chain movement patterns. Furthermore, there is also no difference in energy system utilization between the tests as the energy system is predominantly the ATP-CP system. Therefore, we cannot conclude what might be the precise reason for the lack of relationship between isokinetic leg strength and sprint and agility performance tests in this study on collegiate AF players. However, we suggest that other factors, such as training status and sport experience and single vs. multi-joint movement patterns, may have had an impact on the results of the present study.

The results of the present study should be evaluated with its limitations. The major limitation of the study was testing the absolute peak torque instead of relative peak torque (Nm.kg-1). It was also noticed that sprinting and agility performances were affected by body mass. Future studies should take these factors into consideration.