Material and Methods: This study was an online cross-sectional self-report survey. An online questionnaire was administered to physician mothers via the online “Physician Mothers” social group in Facebook, with 3,787 members. A total of 127 participants responded to the questionnaire, which consisted of three parts, namely, sociodemographic information, the International Physical Activity Questionnaire-Short Form, and the Cornell Musculoskeletal Discomfort Questionnaire.

Conclusion: In this study, physician mothers were found to be mostly physically inactive, and their activity level was not observed to be related to their musculoskeletal pain.

Physical activity level decreases during pregnancy and returns to the pre-pregnancy level in about six months after birth (4). Mothers are recommended to perform physical activities such as aerobic exercises, pelvic floor exercises, stretching, and walking after childbirth (5). Physical activity in the postpartum period helps with weight loss in the short term, increases cardiorespiratory function, improves emotional well-being and mental health, and reduces postpartum depression and anxiety (6).

Despite these observations, very few studies have determined the relationship between physical activity level and musculoskeletal pain. Therefore, the aim of the present study was to evaluate the relationship between physician mothers’ physical activity level and musculoskeletal pain in the two years after childbirth.

The study was conducted as an online cross-sectional, self-reported survey-based trial. The ethics committee of our hospital approved the study’s protocol (Approval no.: 2020-237) conducted in accordance with the guidelines of the Declaration of Helsinki, 2013.

Data were collected through an online questionnaire-based survey that was administered on a very active and reliable online social group in Facebook, ‘Doktor Anneler’ (English translation: ‘Physician Mothers’, which had 3787 members at the time of the study. All members had been admitted to the online social group after verifying their physician identity. The participants were fully informed about the study before giving their written informed consent to participate in the study. All participants in the study had at least one birth.

Inclusion criteria were being a member of the ‘Physician Mothers’ group, voluntary participation in this study, and participation within two years after the previous birth. Exclusion criteria were being pregnant, more than two years having elapsed since previous birth, and having any musculoskeletal system disorders that might restrict their movement.

The sample size was calculated at a 95% confidence interval, and the level of significance was fixed at 0.05 (7). The determined sample size was 102. A total of 127 participants responded and were included in the study.

The Survey and Outcome Measurements

The CMDQ evaluates frequency of pain or discomfort in 11 different body parts within the previous seven days and determines the level of pain and whether the pain affects the ability to undergo evaluation (8,9). The Turkish version of the CMDQ questionnaire has been shown to be a valid and reliable tool and was, therefore, used in this study (10).

The IPAQ-SF examines physical activity level according to the occurrence and time of participation in the last seven days. The measure classifies physical activity levels into low-, moderate-, and vigorous-intensity levels. Responses were converted to metabolic equivalent task (MET) minutes per week (MET min/wk) according to the IPAQ-SF scoring protocol: total minutes over the last seven days spent on vigorous- and moderate-intensity activity and walking multiplied by 8.0, 4.0, and 3.3, respectively, to create the MET scores for each activity level. Physical activity levels are classified into three categories according to the total MET scores; <600 MET-minutes/week (m/w) is physically inactive, between 600 and 3000 MET-m/w is moderately physically active, >3000 MET-m/w is vigorously physically active (11). The Turkish version of the IPAQ-SF questionnaire has been shown to be a valid and reliable tool and was, therefore, used in this study (12).

Statistical analyses were performed using the SPSS software version 22.0. A p-value <0.05 was considered to indicate statistical significance. Descriptive results are expressed as mean ± SD, and nominal variables are presented as percentages. Variables were evaluated using the Kolmogorov-Smirnov and Shapiro-Wilk tests to determine if they were normally distributed. According to the suitability of continuous variables, the Student’s t-test or Mann-Whitney U test was performed. Chi-square test was performed for categorical variables. When both variables were normally distributed, correlation coefficients and statistical significance were calculated using the Pearson test; otherwise, the Spearman test was performed.

There was no correlation between the number of children that the participants had and the total CDMQ scores (p=0.558). When the participants were classified into three groups as those having one child, those having two children, and those having three or more children, no significant difference was noted in terms of the total MET and total CDMQ scores (p=0.474 and p=0.115, respectively). The CDMQ score was weakly negatively correlated with time since the previous childbirth (p=0.050, r=-0.174), whereas the MET score was weakly positively correlated (p=0.041, r=0.181). When the physician participants were classified according to their medical branches (Basic sciences/Internal sciences/Surgical sciences/Dentistry), no difference was noted in terms of the total CDMQ scores, but a significant difference was noted in terms of the MET scores in the order of (Dentistry > Basic sciences > Internal sciences > Surgical sciences) (p=0.567 and p=0.014, respectively). 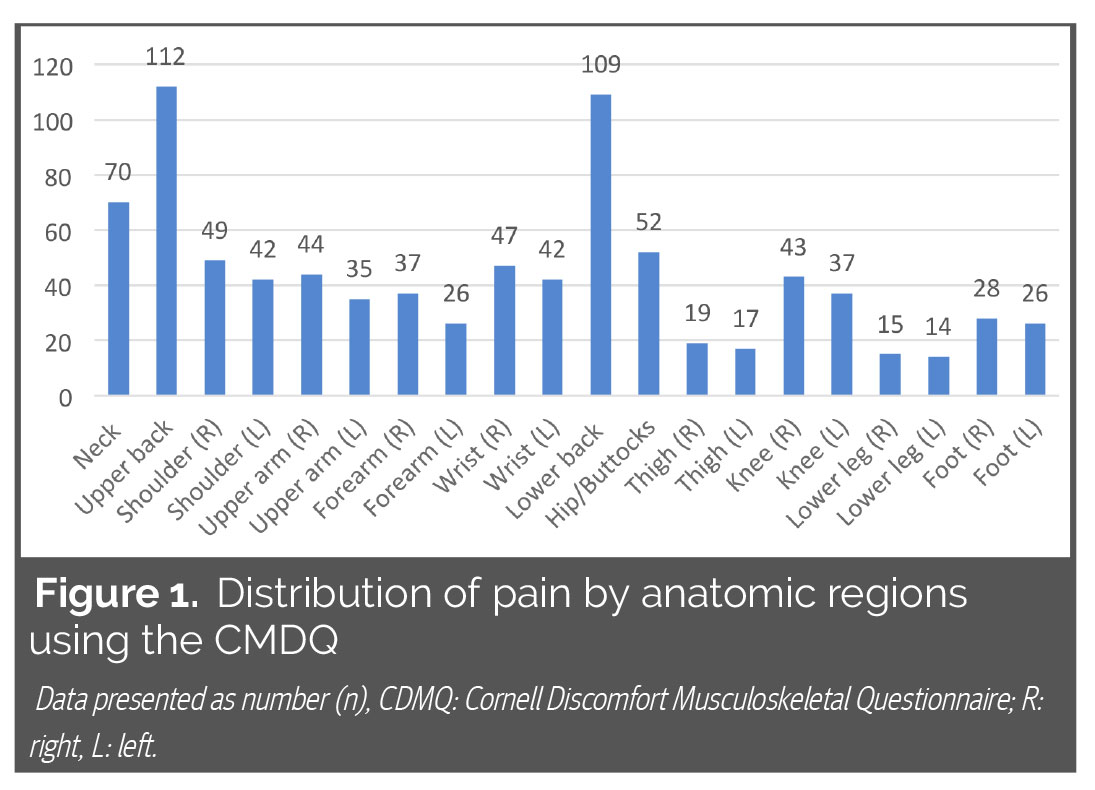 Very few studies have examined physical activities of women after childbirth. In Turkey, two studies have reported on the physical activity levels of women during the postpartum period. In one of these, it was reported that 81.6% of these women were at least moderately active, and in the other study, 57.6% were active (12,13). In both studies, the IPAQ-SF scale was used. Other studies have reported that 49.6% of Nigerian women (14) and 38.0% of Saudi women (15) were at least moderately physically active after childbirth. Studies have reported that the physical activity level of health professionals in America was 85% (16), and that of Turkish health professionals was 12% (17). In the present study, the majority of women were found to be inactive. We noted that Turkish physician women were less physically active than women in the general population during the postpartum period. Considering the above-mentioned findings, Turkish health professionals can be considered to be less active.

Physicians of internal and surgical sciences generally work with night shifts. The lower physical activity levels of physicians working in these branches may be due to intense working tempo and irregular working hours.

Musculoskeletal pain that onsets during pregnancy or after childbirth can become permanent. Approximately 20-30% of patients have permanent back pain up to 2-3 years after childbirth (18). A study reported that in the postpartum period, women experience approximately three times more hip-, knee-, and foot pain than nulliparous women (19). In a study conducted by Aksu et al., the prevalence of neck and shoulder pain was found to be 18.1% and that of lower back pain 19.2%; furthermore, the pain was more intense in multiparous than primiparous mothers (20). Pelvic girdle, back, and lower back pain are the most common musculoskeletal pain associated with pregnancy, and these persist after birth in up to 30%, 37%, and 75% of women, respectively (7,21,22). In the present study, most women had back, lower back, neck, and hip pain, in that order, after childbirth. The prevalence of pain in each region was higher than that reported in the literature and was consistent in terms of common anatomic regions.

It was reported in a study (23) that only 10% of women were regularly physically active during the lactation period, and physical activity was not associated with neck and back pain. However, in this study, participants' ability to exercise regularly was evaluated and no scale was used, and their ability to exercise was determined with only a single question.

The results of a study conducted online might be considered less reliable as researchers cannot reach participants who have no internet access and individuals can give wrong information (24). It is unclear if physician mothers who participated in the online forum were a representative sample of all physician mothers in Turkey, so the results of this study cannot be generalized. It is also possible that the results of the participants in this study may be different than the profile of members of the online group who chose not to participate.

In this study, it was observed that physician mothers were mostly physically inactive, and their activity level was not associated with musculoskeletal pain. Furthermore, physician mothers had less musculoskeletal pain, and were more physically active as the time after birth progressed. Studies with the general population, and including larger sample sizes are needed.

The approval for this study was obtained from Institutional Ethics Committee of Health Sciences University, Bozyaka Education and Research Hospital, İzmir, Turkey (Decision no: 2020-237 Date: 07.06.2020).