Objective: Health problems such as inadequate energy intake, menstrual disorders, and musculoskeletal injuries have become more prevalent in female athletes with the increased sports participation, the development of diagnostic methods and the increased number of scientific researches. It is necessary to carry out studies to determine the nutritional status of female athletes. The aim of this study was to investigate eating habits and eating disorders in female university athletes.

Material and Methods: Seventy-seven university student female athletes aged 18-25 years participated in the study. Information on the athletes was obtained through a questionnaire. Eating Attitudes Test-26 (EAT-26) was used to determine eating disorders.

Results: EAT-26 test results revealed that 32.5% of female athletes had eating disorders. Although the prevalence of eating disorders, skipped meals, and using of nutritional supplements was higher among strength/power athletes, no statistical significance was found between them (p>0.05). There was a positive and moderate correlation between athletes' weekly exercise duration and EAT-26 test scores. (r=0.321, p<0.05).

Conclusions: A high prevalence of eating disorders and inappropriate eating habits were observed in female university athletes. In addition to improving and maintaining the health of female athletes by adjusting their eating habits, there is a necessity of providing training to athletes and trainers about this issue. Physicians, dietitians, nurses, psychologists and coaches should act together in diagnosis and treatment processes of eating disorders among athletes.

In ancient times, the goddesses were acclaimed for their overweight. Today women are encouraged to have a thin and fit body structure (2). For this reason, women are looking for ways to have a thin and delicate appearance. This situation leads to chronic inadequate energy intake, low body weight and adipose tissue, high-intensity training, psychological stress, and eating disorders in female athletes (3). Considering the types of sports, it is stated that the risk of eating disorders is higher in athletes who perform aesthetic sports (gymnastics, ice skating), endurance sports (running, triathlon) and weight sports (wrestling, weightlifting) (4,5).

In addition to eating disorders, female athletes feel under psychological pressure because of the belief that thin body structure, low-fat tissue, high physical activity, and inadequate nutrient intake will make them successful (9). Inappropriate eating habits, such as skipping meals and uncontrolled use of nutritional supplements in athletes, can also lead to energy deficit (9,10). Undernutrition can lead to the decrease in athletes' performance, weakening of the immune system, musculoskeletal injuries, menstrual irregularity, decreased bone mineral density and increased risk of osteoporosis (11). In a study conducted with female badminton athletes, it was found that 25.0% of the players playing in the league and 11.0% of the players in the national team were not getting enough energy (12). Melin et al. found that 62.5% of female endurance athletes had insufficient (22.5%) or decreased energy intake (40.0%) (13). In studies conducted with female volleyball players, it was seen that the athletes could not meet their energy needs during the training and competition periods (14-16).

The university period is a critical one in which athletes' habits of nutrition are established. Nutrition is essential for students who continue their active sports life with university education, both in terms of health and in terms of success in education and sports life (17). In studies on university athletes; meal skipping behaviors (18), low energy and nutrient intake (19) and low nutritional knowledge levels had been found (20-22). In addition to these, desire of having a thinner body structure of female athletes will increase the risk of eating disorders, as well. It is clear that nutritional awareness is essential for university athletes who have economic and time constraints. Therefore, it is important to both carry out studies with young athletes and provide information about the nutritional facts.

This study was conducted to investigate the eating habits and eating disorders of female university athletes.

This observational, analytical and cross-sectional study was conducted with voluntary female university student athletes between 18-25 years of age. Sample size has been determined according to a similar study (23). When the test power was taken as 0.95 and the significance level as 0.05, the minimum sample size was calculated as 55 participants. In order to increase the test power, 77 female athletes were included in the study. Athletes with known metabolic disease, pregnancy, long-term oral steroid use, history of thyroid disorder, pituitary tumor, cardiovascular disease, and oral contraceptive use were excluded from the study. The participants were divided into three groups according to their sport types; endurance, strength/power and team sports. Detailed information about the type of sport, training hours and sport ages of the athletes are given in Table 1.

Table 1. Various data of the participants
× 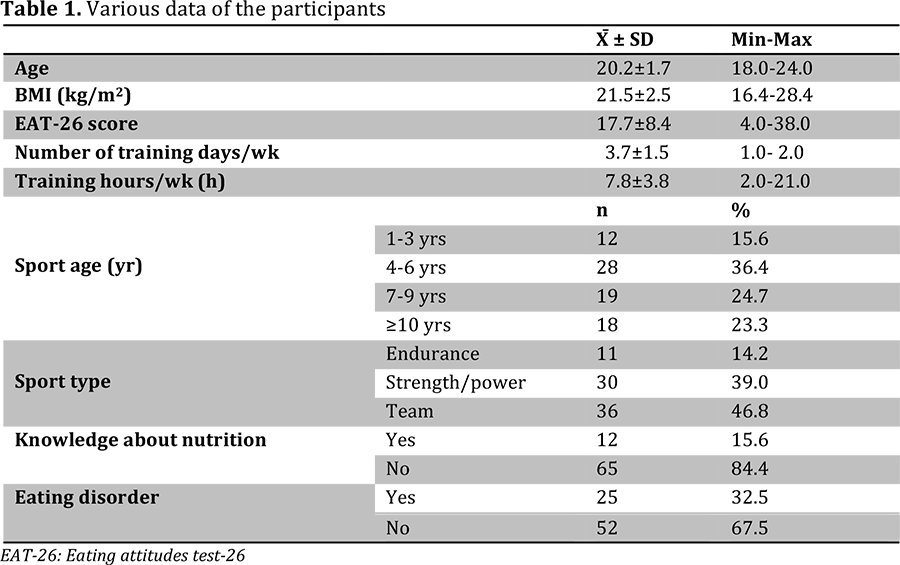 The questionnaire was applied by face to face interview method. Athletes were asked about their eating habits, use of food supplements, and sports life. Eating attitudes test-26 (EAT-26) was used to determine eating disorders. EAT-26 is a test used to determine the psychological and behavioral symptoms that are common in eating disorders (6). The internal consistency of the test, which was adapted to Turkish by Sarıdağ and Devran (24), was found to be 0.70 and the intra-class correlation coefficient was 0.95. Possible score range of the scale is 0-53. Athletes with a score of ≥20 were diagnosed with eating disorder. This study was approved by the Ankara University Ethics Committee (No. 20/341).

IBM SPSS Statistics v18.0 software was used to analyze data obtained in the study. Data is displayed in tables with absolute (n) and percentage (%) values. Where necessary, means and standard deviation (X̄ ± SD) values were taken. Chi-square independent test was used to determine the presence of relationship between two or more qualitative variables. In cases where the chi-square analysis could not be performed (more than 20% of expected values is <5), Fisher’s Exact test was used in the analysis of 2x2 table data. The relationship between two quantitative variables was determined by correlation analysis. Normality of the data set was determined by the Kolmogorov-Smirnov test, and Spearman correlation analysis was performed among variables that were normally distributed. Correlation coefficients between 0-0.3 were evaluated as weak; values between 0.3-0.7 as moderate; and those between 0.7-1.0 as strong. Significance level was considered as 0.05 in the research (25,26). 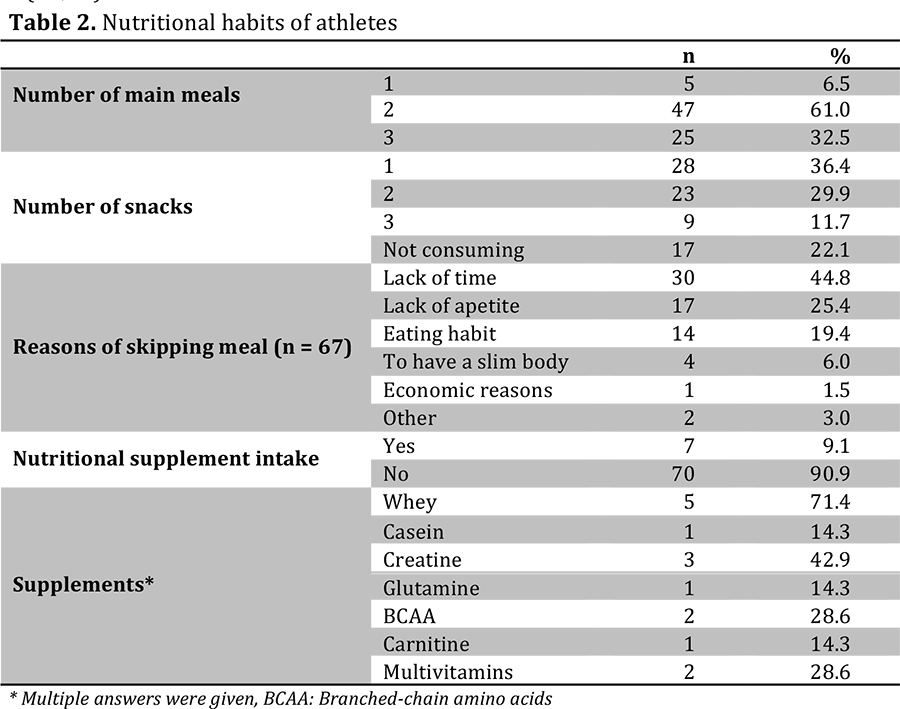 Table 3. The relationship between eating disorders and various factors
× 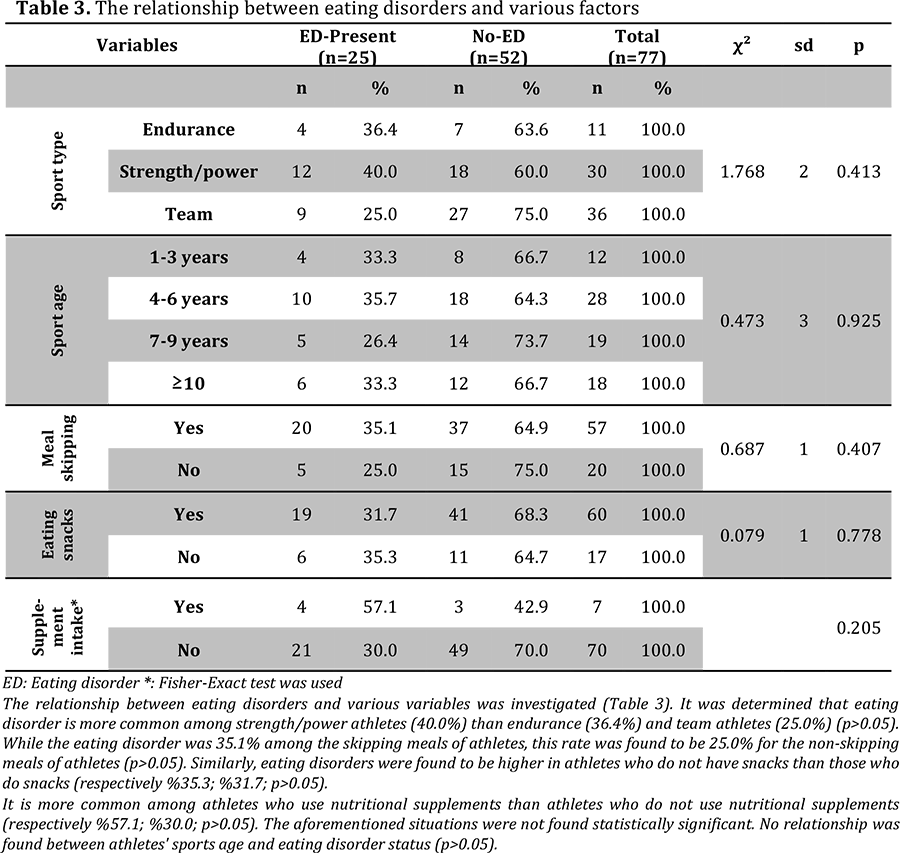 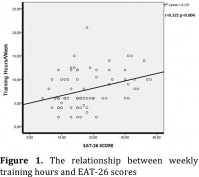 Figure 1. The relationship between weekly training hours and EAT-26 scores
×

Figure 1: The relationship between weekly training hours and EAT-26 scores 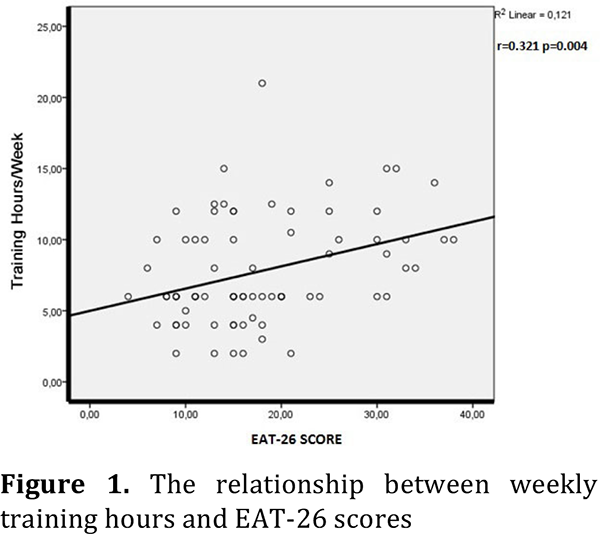 The university period changes individuals' thoughts, abilities, hobbies, physical activity and lifestyles. In addition to these social changes, nutritional habits of university students staying in places such as dormitories and pensions also change during this period. The economic situation, lack of time and the interest in thin and fit appearance lead to incorrect eating habits in university students. Amateur and professional student athletes should pay more attention to their eating habits. Nutrition is one of the main factors of recovery, performance and success in sports (17,18,22).

Inadequate energy intake results in weight loss, decreased muscle mass, increased disability and disease prevalence, and decreased exercise performance. Therefore, athletes are advised to eat at least 4-6 meals a day and to consume energy-rich foods to meet increasing energy requirements (31). In the present study, it was found that only 26.0% of the female athletes did not skip meals and had three main meals and 1-3 snacks. In a study conducted with female archers, it was found that 14.3% of athletes skipped meals (32). In another study, it was found that 60.9% of female basketball players did not consume adequate amount of meals (33).

When the reasons for skipping meals of athletes were examined, the most common causes were found to be lack of time (44.8%), lack of appetite (25.4%) and lack of habit (19.4%). In a study, which included 74 hearing impaired athletes in the Turkish national team, the reasons for skipping meals were found to be lack of time (35.2%), loss of appetite (29.6%), and desire to lose weight (22.2%) (34). The results of our study are consistent with the literature regarding the common meal skipping behaviors among athletes. This was likely to lead to a negative energy balance. In addition, the prevalence of eating disorder was higher in athletes who skipped meals, but it did not reach statistical significance (p>0.05).

Use of nutritional support is common among athletes nowadays. However, athletes use these products in an uncontrolled manner, without having enough information and without consulting experts (35). Bezci et al. reported that 24.2% of the 919 taekwondo athletes were using nutritional supplements to improve performance (47.3% energy drinks, 18.5% vitamins-minerals, 8.6% were consuming protein powders) (36). Nabuco et al. found that 47.3% of 182 athletes from various disciplines were consuming nutritional support. Whey protein (44.4%), maltodextrin (44.4%), glutamine (44.4%) and Branched Chained Amino Acids (BCAA) (11.1%) were the most commonly used supplements (37).

In the present study, it was found that only 9.1% of female university student athletes used nutritional support. The most commonly used food supplements were whey protein (71.4%), creatine (42.9%), BCAA (28.6%) and multivitamins (28.6%). It was determined that 28.6% of the athletes had consumed those for 0-3 months, 42.9% for 3-6 months, and 28.6% for 6-9 months. In this study, it was found that eating disorders were more common in female athletes who used nutritional supplements, but this result was not statistically significant (p>0.05).

When the relationship between the characteristics of participants’ sports life and eating disorders were examined, it was found that eating disorders were seen at a higher rate in strength/power athletes. However, this situation lacks statistical significance (p>0.05). No relationship was found between duration (age) of career and eating disorders (p>0.05). A moderate positive correlation was found between athletes' weekly training time (h/wk) and EAT-26 test scores (r=0.321 p<0.05). The positive correlation supports the view that the perception of poor appearance in female athletes leads to excessive training and incorrect eating habits.

The most important limitation of this study is the lack of blood biochemistry parameters and food consumption records to support the diagnosis of eating disorder. Studies involving health and nutritional status of university student athletes should be increased. It is necessary to create awareness and take measures in order to increase success in sports at international level.

Eating disorders were higher in athletes who skipped meals and had not snacks. The use of nutritional supplements and higher training time significantly increase eating disorders. Many of the of the athletes at university level did not receive nutritional courses. It is necessary to inform athletes and their coaches to improve the female athlete health. Physicians, dietitians, nurses, psychologists and coaches should act as a team in the diagnosis, treatment and prevention of eating disorders in athletes.

The authors declared no conflicts of interest with respect to the authorship and/or publication of this article.

The authors received no financial support for the research and/or authorship of this article.