Objective: The patients are frequently referred to swimming for conservative follow-up and treatment of scoliosis. However, there are also studies reporting high scoliosis prevalence in swimmers. The aim of this study is to define the scoliosis incidence in adolescent swimmers and evaluate the effect of swimming on radiological parameters in swimmers with scoliosis.

Material and Methods: The medical reports of the swimmers who have applied to sports medicine outpatient clinic in our institution for license renewal were retrospectively reviewed. The swimmers with positive Adam’s forward bending tests determined during physical examination were subjected to radiological evaluation and the whole spine was evaluated with anteroposterior and lateral orthoroentgenograms. The swimmers were demanded to continue swimming and called for follow up 1 year later. The swimmers with scoliosis who continued swimming and applied for follow-up one year later were evaluated radiologically.

Results: Six hundred and seventy-nine swimmers were examined. Twenty eight (4.1%) swimmers, [11 male (39%), 17 female (61%); mean age 12.6 (min 10, max 17) years] with positive Adam’s bending test were further evaluated radiologically. These swimmers were called for follow up 1 year later. Seventeen swimmers who continued swimming and applied for follow up were evaluated radiologically. Sagittal and coronal plan parameters of the spine were measured on the first and the second radiographs. These parameters were compared statistically. There was no statistically significant difference among proximal thoracic, main thoracic, main lumbar curves and thoracic kyphosis and lumbar lordosis degrees on the first and the follow-up radiographs of the athletes who continued swimming.

Conclusions: Swimming was found to have no effect on spinal sagittal plane parameters in swimmers with scoliosis. Moreover we found that it has not provided any improvement or stability also in the coronal plane deformity after 1 year follow up. According to our results, it may be concluded that swimming is not effective in the conservative treatment of scoliosis.

Adolescent idiopathic scoliosis is the most common spinal deformity in the pediatric population and is defined as a 3-dimensional rotational deformity of the spinal column above 10 degrees in children aged 10 to 18 years (1, 2). Scoliosis has been reported more frequently in sports such as dance, ballet, swimming, javelin throw, table tennis, tennis, gymnastics and rhythmic gymnastics (3-8). In the normal population, the incidence of adolescent idiopathic scoliosis was reported between 0.47% and 5.2% (9). In regional screenings performed in our country, idiopathic scoliosis incidence is found to be between 0.2% and 1% (10). Scoliosis is encountered more frequently in adolescents performing sports than adolescents with an inactive lifestyle. The increased diagnosis rates of athletes can be due to obligatory yearly pre-participation examinations in this population. However, the relationship between exercise and scoliosis is unclear (11).

Spinal column is affected by muscle strength, torque and repetitive loads during the development in childhood. Theoretically these stresses may cause spinal deformities such as scoliosis and kyphosis in athletes with growing spine (4). Moreover, there are studies showing that performing a sports branch at an elite level from an early age increases the probability of developing scoliosis (12-17).

As there is no strong evidence in the literature to suggest that exercise programs can prevent the progression of scoliosis, asymmetric sports (even at a competitive level) are assumed to increase the risk of developing scoliosis (18).

In the conservative treatment of children with scoliosis sports and/or exercise programs such as gymnastics, rhythmic gymnastics and swimming which have a symmetrical effect on muscle structure is recommended for both spontaneous recovery and maintenance of the condition (19). According to the guidelines of the International Olympic Committee, athletes with spine deformity have no limitations in swimming. Therefore, swimming has an important place in the treatment options of patients with scoliosis (20).

The aim of our study is investigating the frequency of scoliosis in swimmers and evaluating the effect of swimming on spine deformity in adolescents with idiopathic scoliosis through objective radiological parameters.

This clinical study was approved by the local ethics committee (15.03.2019 No: 71). The parents or legal guardian of a child participant are fully informed and given a study consent document to read before their child participates in the study.

Medical records of all swimmers who applied to sports medicine outpatient clinic for pre-participation examination between January 1, 2012 and December 31, 2017 were retrieved from hospital online database retrospectively. In the archive search, the records of 679 swimmers (swimmers registered at a sports club and training for at least 6-10 hours a week with individual medley type of swimming exercises) among 6861 athletes from different sports branches between 2012-2017 were retrospectively analyzed. Spinal column was examined during routine controls of the swimmers. Inclusion criteria were being in adolescent age group (10-18 years), having positive Adam's forward bending test and complete medical records.

Twenty-eight adolescent swimmers who described posture disorder by their families or themselves, who had shoulder asymmetry, and whose physical examinations were positive for Adam's forward bending test were referred to orthopedics and traumatology clinic. Two orthopedics and traumatology specialists who were experienced in the treatment of spine deformity, examined the swimmers and anterior-posterior and lateral direct orthoroentgenogram radiographs of the spinal columns were obtained. Of the athletes, 11 were male (39%) and 17 were female (61%). The average age during the first scoliosis diagnosis in the swimmers was 12.6 (10 to 17) years, the mean duration of swimming performance till the scoliosis diagnosis was 3.4 (1 to 9) years. Conservative follow-up performed in all swimmers and they were recommended to continue swimming training. The 28 swimmers diagnosed with scoliosis, were called for follow up 1 year later. Seventeen (7 male, 10 female) of the swimmers with scoliosis continued swimming and applied for follow-up. The effects of swimming exercises on these parameters were evaluated by comparing the radiological parameters measured on the first radiographs and the radiographs obtained during the follow up. 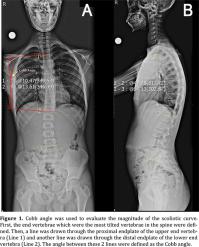 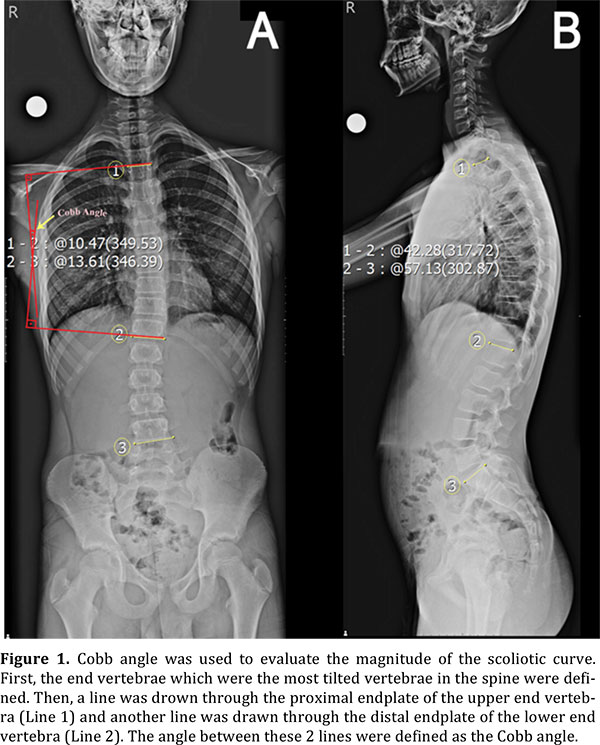 Data were evaluated using SPSS for windows 21.0 software (SPSS Inc, Chicago, IL). Descriptive statistics were calculated as frequency and percentage for categorical variables and as mean, standard deviation. Intergroup comparisons were made using Student’s paired t-test or Mann Whitney-U test. Comparisons between the radiological parameters measured on the first and the last follow-up radiographs were made using the paired sample t-test and Wilcoxon signed ranks. p values of <0.05 were considered statistically significant.

Table 1. Demographic features of the swimmers
× 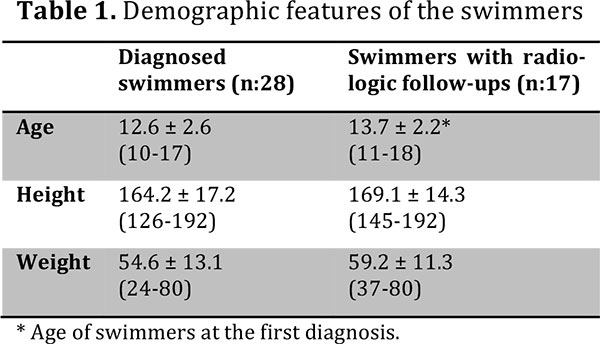 Seventeen (7 males, 10 females) out of 28 swimmers continued swimming and applied for follow up. The demographic data of these 17 swimmers are summarized in Table 1. The radiological parameters of the swimmers were compared through the first and the follow-up radiographs. In the first radiograph; the mean proximal thoracic curve was measured as 5.4 ±8 degrees, the main thoracic curve was 14.3 ± 10.4, the main lumbar curve was 12.3 ± 7.2; the mean thoracic kyphosis was + 26.7 ± 11.2 degrees, the mean lumbar lordosis was 51.5 ± 15.4 degrees (Table 2).

We found no statistically significant increase in the proximal thoracic, the main thoracic, the main lumbar curves, thoracic kyphosis and lumbar lordosis degrees between the first and the follow-up radiographs (p=0.587, p=0.789, p=0.861,p=0.840, p=0,709).

A potential relationship between age and the prevalence of scoliosis in children who start sports at an early age was asserted; it was found that scoliosis was more frequent in those who preferred swimming lessons at an early age (12). In karate, gymnastics, horse riding and skating groups, scoliosis was diagnosed less frequently (21). Scoliosis incidence was reported to be 24% in professional ballerinas, 16% in swimmers, 12% in gymnasts and 10% in tennis players (7, 22, 23). In our study, we detected scoliosis in 28 (4.1%) out of 679 swimmers. An epidemiological study on the prevalence of scoliosis between 10 to 15 years old children in Turkey, the scoliosis incidence was reported as 0.47% (0.71% in females and 0.28% in males) (24).

According to the guidelines of The International Scientific Society on Scoliosis Orthopedic and Rehabilitation Treatment (SOSORT), it is clearly stated that sports are useful in the treatment of scoliosis but cannot be considered as the only treatment. In addition to correcting the posture, general fitness and quality of life exercises are recommended (25). The 28 swimmers who were diagnosed with scoliosis were also recommended to continue swimming according to these guidelines.

The general belief is that gravity increases scoliosis. It is thought that the risk of scoliosis is reduced when gravity is eliminated so that the Cobb-angle is decreased in people with scoliosis (26). Therefore, in-water exercises are recommended. There are studies investigating the effects of regular swimming on anthropometric variables and posture (27). Damsgaard et al. reported that no significant difference was found in the anthropometric measurements between the group in which the samples performed swimming exercises once a week for two years and the group in which the samples did not swim (28). In the study conducted by Bielec et al., scoliosis improvement was found to be more pronounced in the swimming group than in the control group (29). We found similar results with the results of Damsgaard et al. No significant increase or decreases in the proximal thoracic, the main thoracic, the main lumbar curve, thoracic kyphosis and lumbar lordosis degrees were found in our study.

The effects of different sports activities on the spinal column may vary. It has not been shown in the literature that sports with high torque, such as gymnastics, ballet, swimming, wrestling and javelin throwing, directly accelerate or worsen scoliotic or kyphotic deformities, and therefore these sports are permissible activities for patients with spinal deformities (4,30). Zaina et al. compared adolescents who were swimmers (n=217) and who were not swimmers (n=112) regarding the effects of swimming on the spine and they observed that swimming increased the risk of trunk asymmetry, hyperkyphosis and hyperlordosis. However, they concluded that swimming should be accepted as a treatment option in scoliosis, despite of spinal deformities increased by swimming (31). According to our results, swimming exercises had no effect on sagittal plane parameters such as kyphosis and lordosis and does not have any corrective or increasing effect on coronal plane deformity. We believe that rotational movements around an axis in the coronal plane are more dominant than in sagittal plane during swimming. However, our results demonstrate that even though it does not help correcting the coronal deformity, swimming at least does not significantly increase the present scoliotic deformity, as well. Therefore, we believe that swimming exercises may be recommended to patients with scoliosis as it may improve the core region by strengthening abdominal and dorsal muscles, increase breathing capacity.

The retrospective design and the lack of a control group are main limitations of this study. Subjectivity of Adam's forward bending test, non-compliance of the swimmers with scoliosis for follow-up, evaluation of different swimming styles together and heterogeneity of all spine curve types are the other possible limitations. Moreover, due to the retrospective nature of the study the data on the exact menarche age of the female swimmers are missing. This data is important as curve progression is the fastest in female adolescents, during 6 months before and after the menarche. It may also be possible that swimming exercises might have avoided the probable progression of the curve during the growth peak in this period. Therefore, our results should be interpreted cautiously.

The strength of our study is the evaluation of a rare and precious cohort and the lack of a similar prevalence study in our country.

We could not find any therapeutic effect of swimming on scoliosis, Our results should be interpreted with caution as our study group is small and the study is retrospectively designed. Prospective randomized studies with longer follow-up periods with larger patients series and control groups are required for a definite conclusion.