Objective: Nitric oxide (NO) is a gas with vasodilator, antioxidant and metabolic regulatory effects. However, NO may be converted into an oxidant substance, under oxidative stress conditions as severe exercise, reducing the bioavailability of NO. Therefore, NO may take part in training adaptations. The main aim of this study was to investigate the effects of a volleyball match on serum NO level and oxidant/antioxidant status, as well as some physiological stress responses.
Materials and Methods: Healthy female competitive volleyball players (n=12), and a control group (n=12) that gave up regular volleyball training at least three years prior to to the study, aged 16-22 years old, carried out spike-block jump and agility T-tests, and lactate elimination speed was determined following a Yoyo intermittent recovery test. Heart rate (HR), fingertip blood lactate levels, rate of perceived exertion (RPE) were measured during volleyball matches. Serum NO level was determined spectrophotometrically with the "Griess Reaction" method. Serum total oxidant status and total antioxidant status (TAS), erythrocyte glutathione peroxidase activity, and physiological stress markers such as serum creatine kinase (CK), lactate dehydrogenase (LDH), alanine- (ALT) and aspartate amino transferase (AST) activities by enzymatic-colorimetric methods, using venous blood samples taken before and following the matches.
Results: The players’ HR, lactate and RPE levels during a match were significantly lower than those of the controls. Post-match serum TAS, CK, LDH and AST levels were significantly higher than baseline values for both player (p≤0.05) and control (p≤0.01) groups. However, post-match serum NO levels were higher than pre-match levels only in the player group (p≤0.05).
Conclusion: Increased NO and lowered physiological stress levels following a match may result from a higher vasodilator and recovery capacity based on training adaptation in the players, as well as the low intensity of the matches. The observation that serum NO levels did not display relationships with performance parameters may result from the anaerobic nature of volleyball.

Volleyball is an intermittent sport requiring players to compete in frequent short bouts of high-intensity sprints, jumps (blocking and spiking), and court movements during a total of ~60-90 min duration. It requires players to have well-developed anaerobic alactic and glycolytic energy systems, as well as reasonably well-developed oxidative capabilities (1,2). However, the proportion of lactic acid accumulation increase during the repetitive explosive movement pattern is not clear. It is reported that aerobic fitness enhances recovery from high intensity intermittent exercise through increased aerobic response, improved lactate (La) removal and enhanced creatine phosphate (CP) regeneration (3).
Nitric oxide (NO) is associated with the physical fitness status, and it is synthesized from L-arginine through the nitric oxide synthase enzyme (NOS) and is a gas that has vasodilator, antioxidant and metabolic regulatory features (4). Metabolic features of NO during exercise can be summarized as the regulation of blood flow, uptake of glucose into the cell, muscle contraction function and restriction of glycolysis, mitochondrial respiration and CP break-down. NO is stated to have both oxidant and antioxidant features depending on physiological conditions (4).
Exercise-induced oxidative stress (OS) might itself be beneficial by inducing arterial antioxidant enzymes and improvement in endothelial function has been ascribed to an enhancement in the expression of enzymes associated with antioxidant defense, such as catalase and endothelial NOS (eNOS) as response to moderate-intensity aerobic exercise (5,6), while high intensity exercise increases OS levels by reactive oxygen species generated and affects endothelial function negatively, decreasing the bio-availability of NO (6). All isoforms of NO can be regulated by transcription through hypoxia and muscle contractions. Neuronal NOS (nNOS) expression increases with contusion, severe injury, and muscular activity (4,7).
Possible traumas resulting from repetitive jumps and strength requirement movements may cause NO production during a volleyball match. The increase in NO after volleyball trainings may contribute to volleyball performance, increasing La elimination and insulin-independent glucose intake because of its role in aerobic fitness or it may restrict volleyball performance as it inhibits phosphocreatine breakdown (4). Therefore, changes in blood NO levels during a volleyball match may affect OS and physiological stress levels either positively or negatively.
Thus, it was hypothesized that a volleyball match increases serum NO levels, and this increase is related to oxidative and physiological stress levels, as well as blood La concentration and La elimination speed (LES), and but not anaerobic power performance indices.
To test the hypothesis, two separate volleyball matches in either young female volleyball players or sedentary controls were compared to determine the effects a volleyball match on serum NO levels and mentioned OS markers, total oxidant status (TOS) and total antioxidant status (TAS), erythrocyte glutathione peroxidase (GPx) activity, albumin and uric acid levels as well as serum creatine kinase (CK), lactate dehydrogenase (LDH), alanin aminotransferase (ALT) and aspartate amino transferase (AST) activities, La concentration, LES and some volleyball performance indices.

Table 1. The characteristics of the participants
×

Table 2. Comparison of some physiologic parameters for players and controls
× 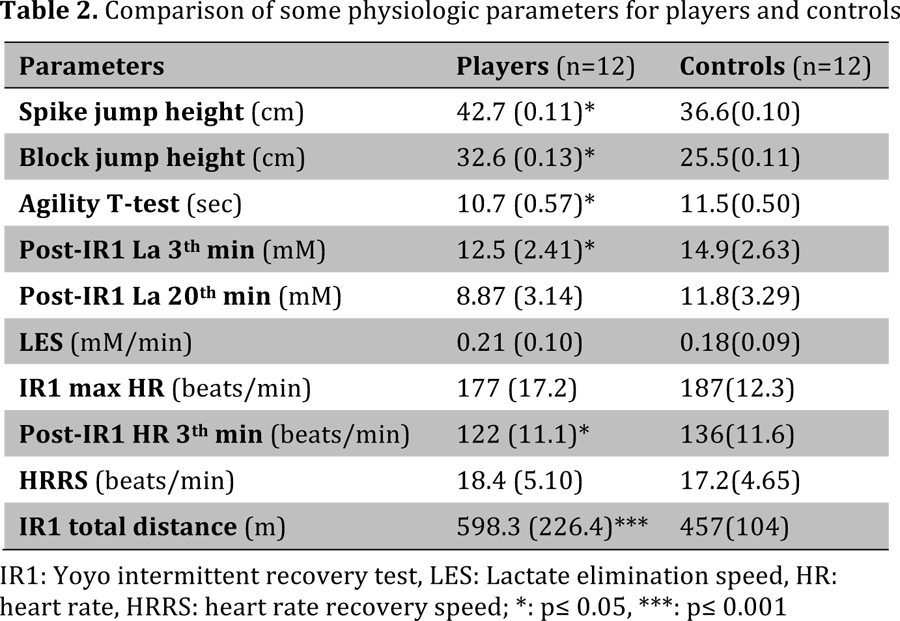 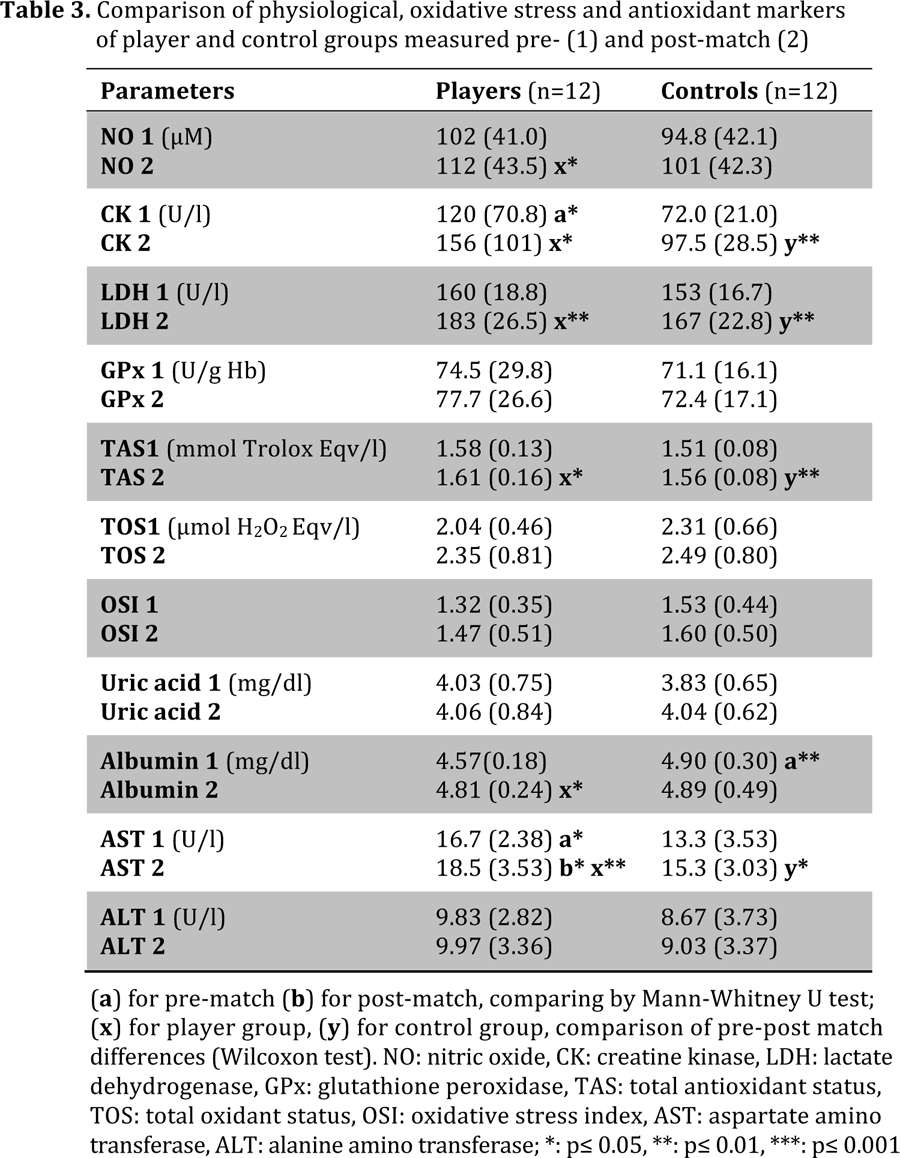 When haematological parameters of both groups’ pre-and post-match values were analyzed, there were significant differences in white blood cell count (WBC) in both volleyball players (p=0.005) and the control group (p=0.025), and in the haematocrit (Hct) level only in the controls (p=0.003).
There were no significant correlations between NO and any other parameters obtained from both player and control groups before and after the match.

Although volleyball matches created moderate physiological and OS levels in both groups, the increase of serum NO levels only in the player group may be related to a higher vasodilator potential and antioxidant capacity obtained by training adaptation. There was no relationship between blood NO levels and performance parameters which may be due to the anaerobic nature of volleyball. A further study on elite volleyball players during a real volleyball match may provide more extensive knowledge related to NO and OS for the sports science literature.

This study was supported by the Scientific Research Foundation (2011-EBIL-003). The authors declare that they have no conflicts of interest, financial or otherwise.